Lessons for the Trans-Pacific Partnership from the U.S.-Singapore Free Trade Pact 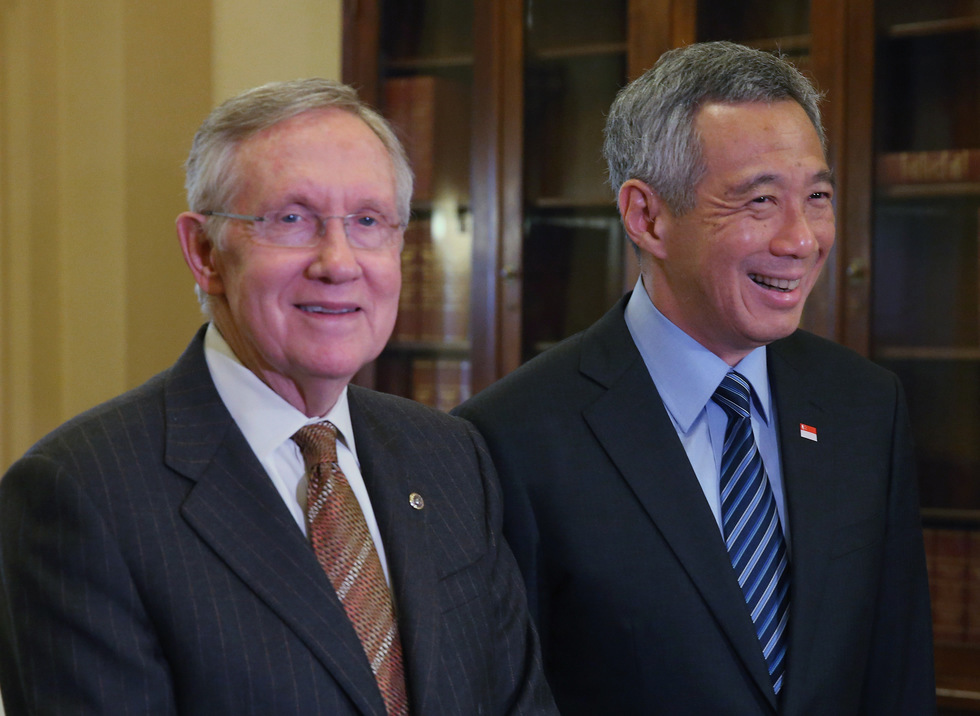 U.S. President Bill Clinton and Prime Minister of Singapore Goh Tok Chong were playing a round of golf in Brunei in 2000 when they talked about a potential free trade agreement between the two countries. Fast forward to 2014: this year marks the tenth anniversary of the U.S.-Singapore Free Trade Agreement (USSFTA), the first U.S. free trade agreement with an Asian country. The USSFTA has been one of the elements in Singapore’s strategy for making the country the “Home for Business” in Asia.

Lee Kuan Yew, Singapore’s Prime Minister for 31 years, decided early on to court U.S. multinationals to set up operations in the country. He explained this approach in 2007: “Let’s make this a first world oasis in a third world region. So not only will they come here to set up plants and manufacture, they will also come here and from here explore the region.” Despite its dearth of resources, Singapore has achieved outstanding economic growth. Singapore’s per capita gross national income (GNI) at $51,550 in 2012 is similar to that of the U.S., having risen fifty-five-fold from 1970 to 2012. The U.S., in comparison, had a ten-fold increase during the same period, to $52,013. Singapore’s unemployment rate was only 1.8% in 2013. In addition, the country has been rated highly in many trade- and investment-related rankings.

The USSFTA itself has contributed to a dramatic strengthening of U.S.-Singapore trade ties. Singapore’s Minister for Foreign Affairs, K. Shanmugam, said in May 2014, “At its ten-year mark, the success of the USSFTA is evident. Total trade volumes have reached the US$50 billion mark. U.S. exports of goods to Singapore increased by over 85%, making Singapore, despite our small size, the U.S.’ 13th largest export market. On top of that, the U.S. has a trade surplus of US$18 billion!”

Singapore seeks a balance between courting larger neighbors such as China and India and maintaining a close relationship with the United States. China is the destination for 19.6% of Singapore’s total foreign direct investment, while the U.S. is a major investor in Singapore, making 14.3% of all equity investments in the country. Although Singapore has a bilateral free trade agreement with China, it has also established a defense agreement with the United States to go along with the USSFTA.

The tenth anniversary of the USSFTA provides a chance to consider the larger opportunity presented by the Trans-Pacific Partnership (TPP). The USSFTA has provided a blueprint for the current TPP negotiations. Indeed, Singapore was one of the original four countries that promoted the concept of the TPP before the U.S. became involved. Singapore is a strong proponent of this agreement and is keenly interested in the U.S. accelerating efforts to bring it to a conclusion.

The TPP offers a bigger prize to all parties involved. If the U.S. and its counter-parties can’t finalize the TPP, other regional trade initiatives might still move forward, creating a risk for the U.S. of being left out. In 2007, Lee Kuan Yew noted China’s speed in forming trade relationships: “I had told Charlene Barshefsky—Clinton’s trade rep—about 12 years ago. I said, ‘Better move before these chaps move, because look at their size!’ In the end she moved but the free trade area was only with Singapore and with high hurdles which the others in ASEAN could not clear. On the other hand the Chinese made a strategic decision and overruled trade and industry or whatever local domestic power groups, and said, ‘This is a strategic necessity—move.’ And you’ve got to match this.”

What lessons might we learn from Singapore and the USSFTA on finalizing the TPP negotiations and what future additions might there be? I would say the following:

First, countries need to balance pressure from domestic constituencies with the greater benefit that such a far-reaching agreement would have. Singapore determined in its negotiations with the U.S. that a bilateral FTA (in 2004) would not only deliver strong economic benefits, but was also important from a security perspective. Foreign Affairs Minister Shanmugam said recently, “Because trade is strategy, Singapore made strategic concessions to the U.S. in the USSFTA that were not otherwise available to any other FTA partner. This is because the U.S., unlike others, is a strategic partner, playing a key role in our security and is a force for stability in the region.”

Second, the momentum needs to be heightened for the TPP to be concluded since there are rival trade agreements in the offing. In order to do this, Congress needs to approve Trade Promotion Authority (TPA) so that the administration has “fast-track” authority to progress the negotiations. As Minister Shanmugam noted, “The TPP is not the only game in town. There are other regional FTAs being negotiated which do not include the U.S. There has already been good progress on the Regional Comprehensive Economic Partnership (RCEP) that started three years after the TPP. Discussions about an Asia-Pacific-wide FTA (FTAAP) are also being taken forward in APEC. China has also proposed the upgrading the ASEAN-China FTA.”

Finally, China and India could potentially be considered as members of the TPP in the future. Singapore, as previously noted, is keenly interested in maintaining a balanced perspective and ensuring that there is peace and stability in the region. Without it, its economic interests and its strong track record of success would be jeopardized.