For North Korea, a Disastrous 2013 Has Set Up a Precarious 2014 | Asia Society Skip to main content 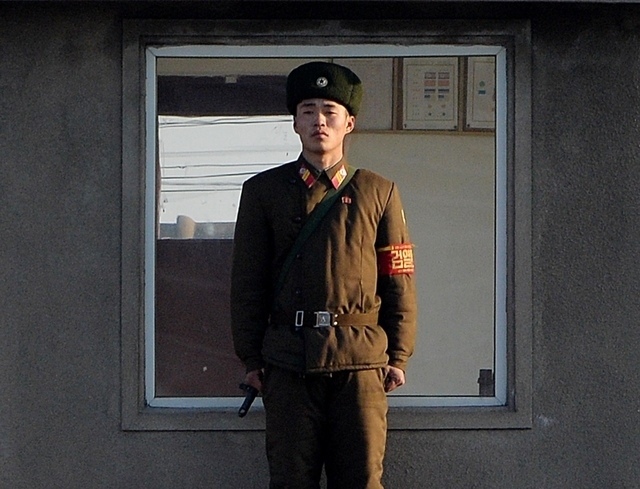 A North Korea soldier stands guard on the banks of the Yalu River which separates the North Korean town of Sinuiju from the Chinese border town of Dandong on the second anniversary of the death of former leader Kim Jong-Il, December 17, 2013. (Mark Ralston/AFP/Getty Images)

If diplomacy is at times the act of building ladders for your opponent to climb down, rarely has a country needed it more urgently than North Korea today. The leadership in Pyongyang spent 2013 destroying the last rungs of the teetering ladder built by the Six-Party Talks in the mid-2000s. So, it enters 2014 on a ledge, and there are no obvious ways down.

North Korea finds itself in an ever-more precarious international situation after a disastrous series of decisions in 2013. Not long ago, reasonable analysts saw inklings of North Korean interest in economic reform. As early as the first days of the new leadership in January 2012, North Korean officials reportedly said: Kim Jong Un was “focused on a ‘knowledge-based’ economy and looking at economic reforms enacted by other nations, including China.” As late as January 2013, Google Executive Chairman Eric Schmidt’s visit suggested that North Korea might believe the country could not prosper while isolated.

But on February 12, any such hopes were dashed. North Korea’s third nuclear test – the first on Kim Jong Un’s watch – led the well-aligned governments in Washington, Seoul and Tokyo to close ranks further behind their policy of isolating North Korea until it is willing to negotiate denuclearization in earnest. Meanwhile, China – North Korea’s link to the outside world – became noticeably less supportive. Subsequent missile tests, work at the Yongbyon nuclear site, the halt of business at the North-South collaborative Kaesong Industrial Park and the December execution of Kim’s uncle and adviser, Jang Song Thaek, have progressively worsened the dynamic.

It will be some time before we understand these events properly – in North Korea analysis, patience is indeed the better part of wisdom. But we do know that, whatever explanation proves correct in hindsight, there are few ways to describe these events that suggest North Korean affairs are healthy and stable.

From the competing theories on Jang Song Thaek’s execution, for example, all point to major problems for North Korea. The North Korean government’s claim that Jang worked “to overthrow our leadership and our state” would certainly seem to indicate that there is a violent competition for power. And if the execution is meant to reverse plans for an economic opening, then it is clear that Kim opposes reform.

North Korea’s isolating decisions in 2013 stand in stark contrast to the progress the United States has made with two other governments – Iran and Myanmar.

Iran found new impetus to engage with the United States, while Myanmar achieved real gains in 2013 from its recent reforms. And although the three countries’ circumstances are vastly different, they are all subject to the reality that the 21st century economy favors those who connect across borders and engage globally.

So what does all this say about the prospects for next year? North Korean leaders may attempt in 2014 to pair the military-first policy in evidence so strongly in 2013 with economic reforms. But, given the extent of North Korea’s isolation, it is difficult to imagine how North Korea’s economy could grow substantially. The contradiction between the urgent need for economic reform and the impossibility of this without international engagement would be at the root of any collapse – or even violent conflict as the regime seeks support by sparking international tensions.

Though direct diplomatic engagement with North Korea remains problematic and unpopular, the United States, South Korea, Japan and China would do well to clarify the choices North Korea faces. These four countries should negotiate among themselves a package of defined, escalating sanctions triggered by North Korean actions that threaten peace in the region, and a generous package of assistance if North Korea acts to open itself, implement its previous agreements and opt for denuclearization.

In 2013, North Korea chose isolation. In 2014, the inherent contradictions of this policy will either intensify or disappear altogether. Whatever happens, the international community will be watching closely.