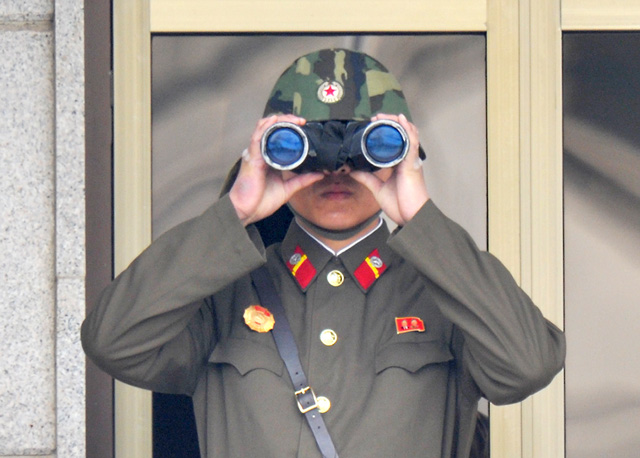 A North Korean soldier using binoculars watches from his quarters at the truce village of Panmunjom in the demilitarized zone on April 23, 2013. (Kim Jae-Hwan/AFP/Getty Images)

Editor's note: It's been a tense several months on the Korean Peninsula. We reached out to Andrew Gilholm, senior Northeast Asia analyst with the consultancy Control Risks, to see what we might expect next.

How do you think tensions on the Korean Peninsula are likely to play out in the coming days, weeks and months?

We called a couple of weeks ago that things might be peaking in the short-term and that’s been the case — there haven’t been any further escalations for a little while and we’ve made it into a lull with "talks about talks." There’s a chance this might stick, and things will stay relatively calm for a while — North Korea in many respects feels the strain of an extended period of heightened tensions and may well be looking for a way out. However, without a major breakthrough the chances of talks getting very far seem very poor, so there’s a pretty high likelihood that the lull won’t last long. Missile and nuclear tests are still very much on the cards.

Does this latest series of provocations feel more serious than those in the past?

The provocations themselves don’t feel more serious to us — nothing has happened that is close to the magnitude of the Cheonan and Yeonpyeong-do provocations in 2010, for example. What’s different this time — and makes things more uncertain and worrying in our view — is basically two things:

• Firstly, the familiar old cycle of escalation followed by de-escalation and negotiation is stuck, with (even more) mutually incompatible bottom lines for negotiation. The North seems more determined than ever to force its recognition as a nuclear power. The South and particularly the U.S. appear adamant that they will not "reward bad behavior" or repeat perceived past mistakes by negotiating without a North Korean commitment to denuclearization.

• Secondly, the domestic political situation in Pyongyang makes things a little more uncertain than before. Well into the second year of the Kim Jong Un era the question of leadership stability is no longer in the spotlight, but we shouldn’t underestimate or forget the huge significance of the shift from Kim II to Kim III. Leadership behaviour in Pyongyang still seems more unpredictable to us with an under-pressure, unfamiliar Kim Jong Un (Park Geun-hye is also untested, but less uncertain esp with a couple of familiar faces on her team North Korea-handling team).

How worried should foreign businesses in South Korea be? How is this likely to affect them? What precautions should they be taking?

Foreign businesses should be aware of the fact that this isn’t necessarily just a re-run of previous cycles that can be dismissed. Although it may sound counterintuitive, company’s in-country decision-makers are typically fairly blasé — at least if they’ve been there for years — compared to their regional or HQ overseers tend to be more worried. Our bottom-line advice to our clients is that security risks in South Korea are still low, and travel and operations there can continue as normal. But they should be monitoring developments more closely than usual.

Most importantly of all, while we’re telling people to "keep calm," they need to know that they’re calm because they have a rigorous system in place for crisis management in Korea, not just because they’ve seen North Korea crises before and think it’s no big deal. A "system" means a coherent structure for thoroughly understanding and monitoring the risks, having considered scenarios including worst-case ones, and having plans for evacuation, crisis management and business continuity in place that are up-to-date and realistic for the local situation (not only a template from the global handbook).

Where else in the region is there cause for concern?

I don’t think any of the neighbors have comparable risks to South Korea. Japan is of course well within range of North Korean missiles, but that’s a very remote threat. It’s China that faces the real headaches — its long-standing North Korea policy dilemma has rarely been more pronounced. It wants status quo on the Korean peninsula, but the current trajectory is a reminder that this status quo can’t last forever. More and more, a cautious Chinese short-term approach (hoping the North can always be restrained and will gradually come round with gentle pressure to reform and a negotiated settlement with the US and South Korea), looks like exacerbating longer-term risks.

Are there any likely scenarios that could lead to a peaceful resolution to this problem?

Sadly it’s really tough to see this. After two decades of periodic attempts at negotiated settlements, the North seems in a stronger position than ever to refuse denuclearization, while the U.S. seems more disillusioned than ever with negotiating with the North. The formula of "denuclearization for economic and security guarantees" just hasn’t worked out and there’s little sign that any new solutions are emerging. Unless the North fundamentally departs from the entire basis of its long-standing strategy, or the U.S. and South Korea decide that denuclearization is only a realistic goal as the end-point of a long-term process of normalization and confidence-building, I fear the chances of a negotiated settlement are still very low.