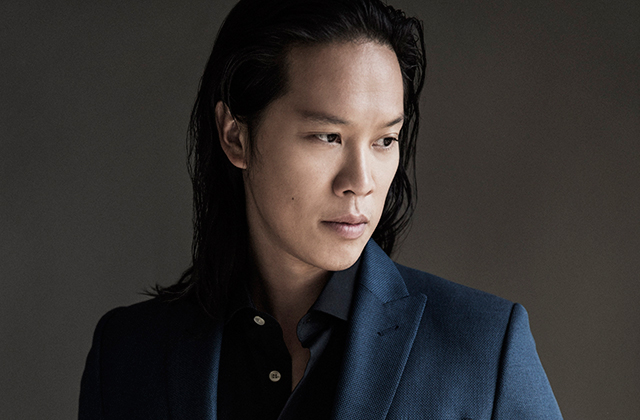 Chinese-American actor Leonard Wu has always had knack for being in front of crowds. Growing up in Washington, D.C., Wu participated in all sorts of activities, ranging from sports and martial arts to stage acrobatics and even Chinese opera. It wasn't until he began his studies at UCLA, where he joined fellow Asian-American actor Randall Park's theater company, Lapu the Coyote that Cares (LCC), when Wu discovered that his performing skills could translate into a career as an actor.

After building his resume with guest appearances on popular television shows like Workaholics, NCIS, Bones, Brothers & Sisters, and Veronica Mars, Wu has joined the second season of the Netflix series Marco Polo as a season regular, playing the Mongolian warrior Orus.

In an interview with Asia Blog, the actor discussed his odd theatrical experiences as a child, his experience in Hollywood, and how streaming sites have contributed to the renaissance of television — and why this helps tackle Hollywood's diversity issue.

The responses have been condensed and edited for clarity.

Growing up, you learned to speak Mandarin and studied Chinese traditions like martial arts and Chinese opera. What made you interested in these things? How, if at all, did these skills keep you connected to your heritage?

You know, it’s interesting. As a kid I don’t know that I had much choice, and I didn’t think beyond it as an activity to do. My parents initially pushed my sister — who began with the opera. And then when I turned 12 or 13 they kind of shoved me into it as well. I was very resistant to the idea, but parents are always going to tell you what to do, and I just kind of went along with it. I ended up falling in love with [Chinese opera] because I love doing martial arts. I became obsessed with the fighting aspects of it, the swords, and the tumbling. It became a very big part of my youth, where I’d basically spend the entire weekend with my family doing Chinese opera. What started as a social function turned into an obsession.

I mean, we’re talking about putting on the full-on four to five layer garb and the intricate makeup and intricate headdresses and performing onstage. We did it all. For me it was normal. Looking back at it now, I realize how not normal it was.

Asian-Americans have increasingly spoken out on being underrepresented in Hollywood. What do you think has contributed to this change in conversation? What has your experience been like in Hollywood?

You know, it’s a very difficult thing in that I think that Hollywood is trying to put everyone into boxes. I mean forget about the fact that you’re Asian — you’re either too fat, too skinny, too tall, too blonde, not character [actor] enough, too pretty, you know? So there seems to be that issue of Hollywood just constantly looking to define people right away, as soon as they see you.

That being said, when pilot season happens there will be like, five or six Asian American roles. My friends and I will all go out for it, and somewhere along the lines, for one reason or another, they end up being changed to white or other ethnicities. This kind of thing is common. However, as this is happening, I think that there is this growing sense that there needs to be greater representation, and [the industry is] realizing these things aren't intentional — it’s on subconscious level. They are realizing that because the Asian community is becoming more vocal, which is fantastic. We are holding Hollywood accountable. Hollywood now realizes that we have to do a better job of representation, and I think that it’s happening. Could it move faster? Probably. But it is happening.

For example, a show like Marco Polo would not have existed five or six years ago. Now the show is a global phenomenon. Fans reach out to me and tell me how much they love the show, and how it's fantastic to see such a diverse grouping of Asians from all over the globe. So, it's slowly but surely changing.

Some say that casting for generic “Asian” actors is not authentic enough, because within the Asian ethnicity there are very distinct subcultures or groups.

It’s a tricky thing. People have different opinions on it. I understand if something needs to be truly, authentically Japanese, I understand the need to cast somebody Japanese, obviously. But I also subscribe to the idea that, look, we have tons of Australians, and tons of British people coming over here, playing all sorts of roles. We can’t limit what is already a small box that Hollywood puts us into. I think we should get the best talent that is Asian to play that role, and maybe one day we can get to that point where we can say: “No, we want it to be authentically Japanese or authentically Chinese or authentically Korean.” But right now, let’s get the best person of Asian descent to play that role just as they do with the white roles. Again, everyone is Australian or British at this point!

Tell us about your new gig on Marco Polo. What was it like transitioning from a fan of the show to starring in it?

It was nerve-wracking. I was incredibly frightened because of the sheer scope of the show. I had never been on anything so big. The first day of filming, the very first scene, the very first line was mine. I had rehearsed it in the confines of an office. I thought to myself, “I got this scene, no problem.” I get to the set in Hungary, and they built this entire Mongolian ger village with a couple hundred Mongolian extras, 30-40 horses, 20 camels, a bunch of chickens and goats — a real life village that they had built and populated. I had to go and perform and in the back of my head, I'm thinking, “Wow if I mess up my line, it’s not just back to square one for me. Everybody has to reset! All the animals, all the extras, that was going to take 10 minutes.” That freaked me out inside. On the exterior I played it cool, like it was no problem, but inside I was so nervous because the responsibility of what you had to do on such a massive show. As time went on, I got accustomed to it, but man that first month was daunting.

I am a one of [Marco Polo creator] John Fusco’s biggest fans. It was a couple-year process [to get cast for the show], so they were considering me for a role for season one so I had read a lot of the scripts. John understanding of martial arts, of eastern culture, goes beyond appropriation or fetishizing of our culture. The man understands my heritage and my history more than I do. He’s lived in China, he’s studied at Shaolin temples, he speaks Mandarin, he’s a master horse rider, an expert martial artist. This is not a man who is interested just in the surface aspects of the history. He loves it, he embraces it, he lives it. Having that kind of a person as a leader, the figurehead of this production, has made it such a joy to work on because he’s just this wealth of knowledge. He truly, truly wants to represent that culture and do it justice on screen.

Though the television show Marco Polo is a fictionalized story, it is based on real people and events in history. How has preparing for and portraying a real person in history differed from your other roles?

I play the character of Orus. In history there’s actually not a whole lot about him. We do know he was Khutulun’s brother, one of her many brothers, and that they worked together. Beyond that there’s not a whole lot. So, what helps is knowing what Khutulun’s history is and then basically using that to explore the scripts. My screen time is heavily involved with Claudia Kim who plays Khutulun. We would explore that relationship a lot. Beyond that, in terms of playing someone who is a warrior, we worked with the most amazing stunt team — Brett Chan’s Hitz International. Whenever I wasn’t filming, I would be training and studying different martial arts, heavy weight lifting, horseback riding, basically training to be able to handle as much of the fights and stunts as we could. Another mandate from production was to really get as big as possible, to really fill out the costumes, really fill out this character of this Mongol warrior. I gained about 15 pounds before we started filming.

Streaming sites like Netflix and Hulu have revolutionized how we consume movies and television. From an actor’s perspective, is it different being part of a Netflix show over a network one? What do you think about this shift toward online streaming?

You know I think it’s such an amazing, amazing time for television. Seven, eight years ago if you told me that TV would be the place to be, I’d be like, “You’re kidding. It’s movies.” But with the advent of Hulu, Amazon, Netflix, there’s just so much amazing content out there. The beautiful thing is that there is content for everyone. Before streaming, before websites, it was all network stuff. There is nothing wrong with networks, but they are trying to appeal to the whole swathe of America. You end up getting this amorphous show, trying to appease everybody — there’s no specificity. It has to appeal to everybody. Now, shows that have such a specific niche are being made and finding their audience. I don’t know that a show like Game of Thrones would have caught on 10 years ago. Now we have those avenues, people will watch it and word of mouth will get out. It’s been great.

As far as working with Netflix, I think it’s been fantastic. They are willing to take on projects that networks can’t really handle for whatever reasons. You look at a [Netflix] show like Master of None — Aziz Ansari is such a phenomenal comedian and actor. I binge-watched the hell out of it, and I thought to myself, "How could this show not exist somewhere [on traditional television]?" That’s the trouble we face as Asian-American artists. Now we have this beautiful venue that’s willing to take those chances and I think it’s fantastic. The sky’s the limit and I’m looking forward to what the future holds for Asian-American actors with these new venues.