The Americans' Ruthie Ann Miles: 'We Should Not Be Satisfied Playing the Token Asian' | Asia Society Skip to main content

The Americans' Ruthie Ann Miles: 'We Should Not Be Satisfied Playing the Token Asian' 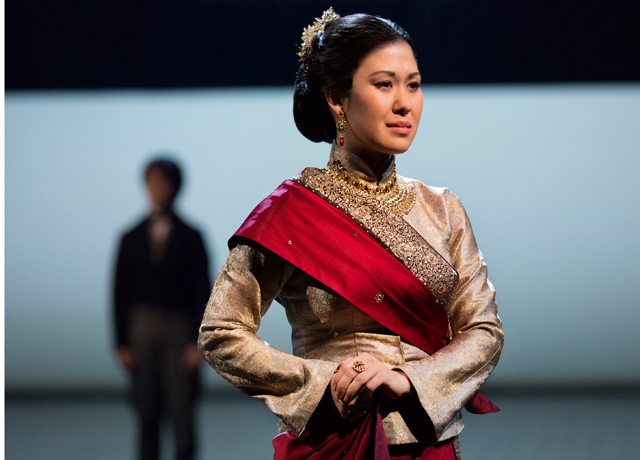 Ruthie Ann Miles in a scene from Lincoln Center Theater's production of Rodgers & Hammerstein's The King and I. (Paul Kolnik)

Ruthie Ann Miles is an award winning stage actress in New York City. In 2013, she played Imelda Marcos in the Off-Broadway musical Here Lies Love, scored by David Byrne, a performance that earned her the Lucille Lortel Award for Outstanding Actress in a Musical for her role. Miles is currently performing in the Broadway revival of The King and I, playing the part of Lady Thiang — last year, she won the Tony for Best Feature Actress in a Musical.

In addition to her theater work, Miles is starring in the current season of the FX drama The Americans, where her character Young Hee breaks through the tough exeterior of the undercover KBG agent, Elizabeth (played by Keri Russell). Born in Arizona, she moved to South Korea as an infant and lived there until she was six years old, when she and her mother moved to Oahu, Hawaii.

In a recent conversation with Asia Blog, Miles talked about her transition from music to theater, her trepidation about a career in television or film, and why her dream is to play the role of Lady MacBeth. The conversation has been lightly edited for clarity.

What was it like growing up in South Korea and Hawaii?

Growing up in Hawaii was a wonderful blend of connecting to Asian heritage while actually living in America. Hawaii is a melting pot of customs and cultures — nearly every Asian ethnicity is represented. I was very fortunate to grow up in such a diverse state.

How did the years you spent growing up in Korea affect your subsequent childhood in the United States? How did this upbringing shape who you are today?

I was raised in South Korea before moving to Hawaii in the second grade, which meant I had a late start learning English, was in English as a Second Language classes, and did not have much practice speaking English at home. I needed to be tutored outside of school to catch up on my language skills. In hindsight, this molded me to be competitive with myself — I wanted to become completely fluent and assimilate into the culture. I wanted to have no accent, which is not to say I was ashamed or wanted to disconnect myself to my Korean heritage — just that I wanted to blend in. So I worked hard at it, and I think that was the first taste of “acting” I experienced. I was learning how to embody somebody I was not, from the inside out. It has also made me culturally sensitive. While I am a fully Americanized, English-speaking woman, I am aware and (sometimes overly) sensitive to Asian American people and actors. I think it improper for myself to adopt a “generic Asian” accent for auditions or characters — after all, there are no “generic Asian” people — so I take responsibility of embodying an Asian person for either screen or stage, to the best of my ability. In this way I take my job very seriously.

You took piano, flute and ukulele lessons for many years, and once aspired to be a music teacher like your mother. What made you decide to take on musical theatre and acting instead?

I was serious about being a music teacher throughout high school. I was playing several instruments and was very involved with the various music programs at school. But in my senior year I was cast as Linda Low, a leading player in the musical Flower Drum Song. She has a big, flirtatious personality, but is caught between the cultural expectations of her Chinese heritage and American cultures. I had a lot of fun playing the character, though I admit I was not tuned into the deeper issues I find now.

During Flower Drum Song the director also gave me a Shakespeare monologue and asked if I’d be willing to read it for a competition. I did, and it went well. It opened possibilities, and I immediately decided to change my major from music to theatre arts.

My instrument training has come in handy through the years as well, for which my mom is immeasurably grateful. I went out on a national tour of John Doyle’s revival of Sweeney Todd, where the actors are also the onstage musicians. I played Adolfo Pirelli, the Italian barber, and also played the accordion, flute and piano. My mom was so proud.

How did you prepare for the part of Lady Thiang in The King And I?

"Preparing for Lady Thiang" is synonymous to me with "picking my directors’ brains.” I continue to question my director and his associate (Bartlett Sher and Tyne Rafaeli, respectively) about this and that moment, asking for clarity and help, asking how to keep the message relevant. They have a plethora of knowledge and I use them to my full advantage!

Bart has full credit for introducing me to Lady Thiang. I did not watch the movies, as I felt it important not to view her through the lens of someone else’s interpretation. I journaled a lot, and I have read the book Anna And The King Of Siam six times now. I have multiple copies, including the audiobook, so it is literally always by my side.

What is one of the proudest moments in your stage and acting career so far?

An out-of-body (but proud) moment for me was, of course, winning the Tony Award for playing Lady Thiang, but I must admit I’m still a bit disconnected from it. It was the first time an Asian American person was even nominated in the Supporting Actress category. It was the first win for an Asian American actor in 24 years! That’s a really staggering statistic that proves the lack of racial diversity in roles that merit an actor to be qualified for a Tony nomination. My Tony win was not a big, personal high-five; it was, however a huge step forward for Asian American performers, and most importantly provided a mirror to prove the severe disparity when it comes to diversity on stage and screen.

I am so grateful for the award and the recognition it has brought, especially the subjects regarding Asian American performers. I continue to be flattered by it and humbled when Asian American students come to see the show, or write me about their story, and share about how they have courage to continue pursuing their dream. I am reminded how important it is for us to encourage one another, as fellow actors struggling to be seen and strive to work in this business. Being part of this bigger picture is what makes me feel proud.

What drew you to the part of Young Hee in The Americans? As a seasoned stage actress, do you see yourself devoting more of your career to television and film going forward?

I was initially drawn to the role of Young Hee because she is Korean! In the years I’ve been depicting different ethnicities on stage, I’ve never had the pleasure of playing a version of myself. This excited me, but also made me nervous. Was I Korean enough?

Also, none of the scenes I used in the audition were actually used in production, so there was no way of knowing what a fun, spunky, witty woman they’d end up writing for me. It was an absolute joy. Week by week I’d learn more about Young Hee and it was such fun.

What has drawn me to theater is that I can lay myself out on the stage one night, and that’s it — it’s gone and I can start fresh tomorrow. The idea of doing film and television has always made me nervous because in one form or another, it lasts forever. I also don’t like the camera. While playing this delightful woman on The Americans has been wonderfully sweet, I still think I will need to work up the courage if I get a "next time."

Is there a particular acting role you haven’t taken on that you would love to do?

There are a myriad of Shakespeare’s leading ladies that I’d love to play, Lady Macbeth in particular. When it comes to musical theater I haven’t yet found a character which really calls to my soul. There are dozens of roles that would be a fun challenge, of course, but it is Lady M that I’ve been dreaming (or nightmaring?) over.

There has been some controversy over “whitewashing” in films, where characters written as Asian in storylines are played by Caucasian actors. What are you thoughts on this?

Whitewashing (where a white person plays a part written for an Asian) and yellowface (where a non-Asian person affects their face with make up or CGI to appear Asian) is shameful to both parties and insulting to Asian people. There has been so much talk about this, especially these last two years, but it feels a bit like preaching to the choir, doesn’t it? It has to stop. Period. But the real question is to figure out how to help studio executives, directors, producers, and casting offices envision non-white people in roles. Big roles. And not just the "non-white" roles.

We should not be satisfied playing the “token Asian/minority” in a production. Our faces represent a major part of the picture of America, so why should we be satisfied to be represented on stage/screen in such a small way.

How do we get down to the fundamental problem of their chanting “Asians don’t sell” as if it were true, or “Americans can’t relate with an Asian romantic lead?" We live in the greatest melting pot in the world, and we simply can’t accept these statements or this terrible habit we’ve seen in the entertainment industry. We are in the thick of it now, and God-willing this conversation is the start of a revolution and not simply a trend. Obviously we need to make progress, but the million-dollar question is how we next move into the future.