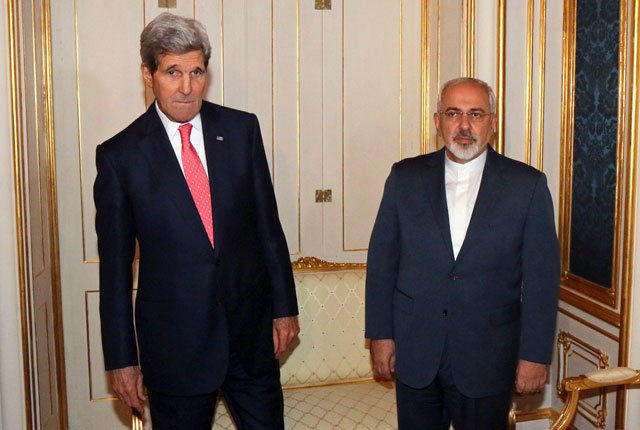 Close, but not quite there: U.S. Secretary of State John Kerry (L) and Iranian Foreign Minister Mohammad Javad Zarif prior to closed-door nuclear talks at the Palais Coburg in Vienna on Nov. 23, 2014. Asia Society's Tom Nagorski predicts a nuclear deal will be signed in 2015. (Ronald Zak/AFP/Getty Images)

I would like to say "Back by popular demand…" but then that would be disingenuous at best. More like, "back because I am a glutton for humiliation." At any rate, what follows is the latest edition of my look at the year ahead in Asia, an Asia-centric version of a global forecast I used to do when I was a journalist. As I wrote the other day, last year's edition — "14 for 2014" — didn't go so well. I fell below the fifty-percent mark; and my crystal ball was only slightly better in the previous year's version. Now, with another broad array of interesting issues and challenges facing Asia, it's time for "15 for 2015," and I've learned at least one lesson: I should listen more closely to (and borrow more frequently from) other prognosticators.

We have no shortage of people in the Asia Society network with ideas and suggestions about what the next year will bring. The other night we hosted a panel on "Asia 2015," a whirlwind tour of the continent's near future. Eurasia Group CEO Ian Bremmer foresaw no deal between the U.S. and Iran; the Obama Administration, he said, was "prepared to extend and pretend" rather than break off the talks entirely. Asia Society President Josette Sheeran saw "transformative" good news on the economic front, in the form of a Trans-Pacific Partnership (TPP) agreement; and Ruchir Sharma of Morgan Stanley predicted "post-euphoria troubles" for Narendra Modi. All had interesting predictions about the impact of the plunge in oil prices: they would prove a "huge gift" to China (Bremmer), a worrisome development for the pursuit of cleaner energy sources (Sheeran), and a nightmare for Russia (all were aligned on that one, and of course that nightmare appears well underway already).

Others have chimed in to help us imagine the year ahead: our India Center Director sees China's GDP missing the 7% mark, and India clearing 7%; an Asia Society Trustee envisions a China-Philippines rapprochement at APEC; and ace Asia Society programmer James Kochien says, "Russia will become even more economically dependent on China, which is awkward for both." Three World Cups are to be held in 2015 — in rugby, cricket, and soccer. Ruchir Sharma predicts his native India will win the cricket crown; a guest at the panel the other night said Ireland would take the rugby crown (he was Irish, of course); and a contributor via Twitter wrote to say, "Japan and USA face off once more in 2015 FIFA Women's World Cup."

Perhaps the most creative forecast came from one Jamie Sawyer — also via Twitter: "Kim Jong Un watches the new movie The Interview and invites James Franco and Seth Rogen to North Korea for a diplomatic visit." (That was an unlikely one, even before Sony pulled the film. Though we suppose the North Korean leader might find a copy.) Frankly, if Franco and Rogen go to Pyongyang in 2015, then I just hope they'll come to an Asia Society forum soon after, and share their impressions.

All right, enough procrastinating. Now, the prognosticating. Below, with thanks to all the above, are my "15 for 2015." As you will see, for the most part it's an optimist's forecast.

Season's greetings to all — and whatever happens with the above predictions, may 2015 bring you only happiness.