Win Some, Lose Some: We Grade Our Forecast for Asia in 2014 | Asia Society Skip to main content

Win Some, Lose Some: We Grade Our Forecast for Asia in 2014 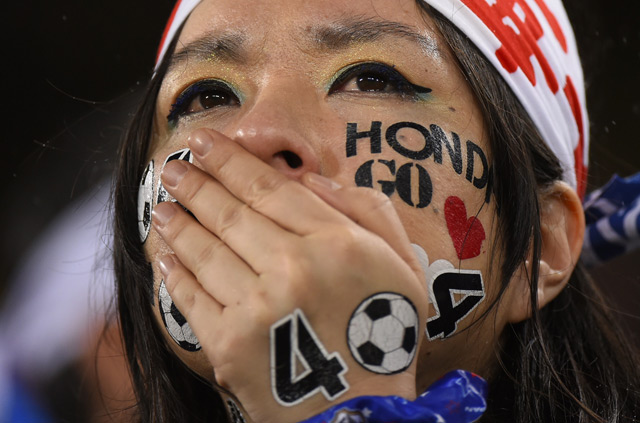 Team Japan's fate at the World Cup in Brazil was just one of the predictions on which our fearless forecaster whiffed this year. (Fabrice Coffrini/AFP/Getty Images)

It’s a holiday tradition in my family; we go around the table and ask for suggestions or predictions about what may happen in the coming year. We get personal forecasts and more global ones; serious and light-hearted ideas both. Decades ago, I looked forward to William Safire’s always interesting and entertaining year-end column for the New York Times, in which he collected his own prognostications for the coming year. Perhaps all this explains why, as a journalist and now an executive at the Asia Society, I like to indulge in end-of-year guessing games of my own.

We still have some time left in 2014, and while I work on a “list” for 2015, now it’s time to take a deep breath, look back at last year’s predictions and see how I did. This, by the way, was a noble habit Safire followed; namely, if you are going to prognosticate, then have the courtesy to revisit the list a year later, and give yourself an honest grade.

A year prior, I had managed a roughly 50 percent success rate for the 13 predictions made; for 2014 I added one prediction to make it “Fourteen for '14,” as it were. As I wrote last December, “Except where otherwise noted, all views are my own — and many if not most may prove utterly wrong.” (Indeed!) So here is the list; my colleagues have helped give each prediction a “grade.”

1. With so many critical elections coming in 2014, I thought I’d start at the ballot box. In India first: Narendra Modi and his Bharatiya Janata Party (BJP) win the April vote in the world's largest democracy — but an outright majority eludes the BJP, and only after a very messy post-election does Modi become Prime Minister. SCORE: ½ point. Technically the main prediction proved correct, but all the difficult stuff (i.e., the analysis) was wrong.

2. Joko runs. In Indonesia, after much hand-wringing and suspense, the charismatic Jakarta Governor Joko Widodo — known often as "Jokowi" — enters the race for President, after receiving the blessing of former President and Indonesian Democratic Party (PDI) leader Megawati Sukarnoputri. SCORE: 1 point. He ran, and …

3. Joko wins. In the end it isn't even close. Jokowi captures a larger share of the vote than any President since the last years of Suharto. SCORE: ½ point. Correct outcome but wrong on “wasn’t even close.”

4. In Afghanistan, peace wins. Meaning — no prediction here on a winner to take the place of longtime President Hamid Karzai, but the vote that ushers in the post-Karzai era passes, mercifully, with far less violence than had been anticipated. SCORE: 1 point. Well done. But …

5. Still in Afghanistan, a good year for the Afghan National Army (ANA). After the vote and as the ISAF mandate winds down (all combat forces will be out by the end of 2014), the Taliban wage fresh campaigns against the new government but fail to do serious harm, or to take significant territory. SCORE: 0. Jury still out — but as of late not looking at all good on this front.

6. China. While economic and security issues fill Xi Jinping's crowded in-box, the Year of the Horse brings unprecedented public anger over something else: the unrelenting and increasingly nasty quality of the air in major cities. SCORE: 0. No doubt there was upset, and even some anger, but nothing that fit the forecast of “unprecedented public anger.”

7. On the subject of protest, remember the phrase "Occupy Central." That's the banner under which a pro-democracy movement will take to the streets in Hong Kong in July, leading to some of the largest protests in Hong Kong's main business district since the 1997 handover. SCORE: 1. Well done.

8. Iran deal. Despite all the obstacles and all the cynicism and all the opposition from Washington to Tehran, the U.S. and Iran and other nations arrive at a more comprehensive deal on the nuclear front. This one fuels even more criticism than the 2013 interim agreement, but the parties sign it with considerable fanfare at Geneva. Israeli officials simmer. SCORE: 0. Technically there is still time — but negotiators have given themselves another extension, so it’s hard to see some pre-New Year’s miracle on this one. Maybe next year?

9. A handshake at the UN. In the wake of the above item, and in the spirit of the U.S.-Iranian thaw, Presidents Obama and Rouhani shake hands on the sidelines of the U.N. General Assembly meetings in New York in September. It is the first time leaders of the two nations have done so in 35 years. SCORE: 0. Clearly I doubled down on this issue — and the results weren’t pretty.

10. For China and Japan, no war and no peace. Having declared their dueling air defense zones, these two Asia powerhouses trade ever-hotter rhetoric and have several small-scale but dangerous run-ins near the disputed Senkaku/Diayu Islands. None of these run-ins lead to casualties. SCORE: 0. Other than the “no war and no peace” formulation, the rest isn’t a fair reflection of what happened this year.

11. China's tough talk and behavior in this area manages to mellow the enmity between Japan and Korea. A northeast Asian version of the enemy of my enemy is my friend… SCORE: 0. Not at all.

12. In North Korea, even Dennis Rodman tires of the regime’s hard line. No more basketball friendship tours with Kim Jong Un. SCORE: 1. Kind of a cheap one, really, but the point is awarded.

13. World Cup fever, Tokyo edition. Helped by a relatively easy draw (a bracket shared with Greece, Ivory Coast, and Colombia), Japan advances through the first round of the World Cup in Brazil. Much is made of the fact that Japan gets through while the U.S. does not (the U.S. suffers in part thanks to a brutal bracket — with Germany, Portugal and Ghana). SCORE: 0. And if there was a negative point to give, it would go here. Japan did not get through — and the U.S. did.

14. (This one came from my colleague Jonathan Landreth) The coming year will see a rise in cooperation between Hollywood studios and a growing number of Chinese partners. Together they are trying hard to make movies that might take advantage of one of Beijing's most visible state-controlled market experiments — the gradual opening of the commercial media sector. But we predict this increased Hollywood-China partnership will turn a blind eye to China's censors. This secretive board of men and women will continue to deny groundbreaking Chinese filmmakers such Jia Zhangke the ability to show their films to their own countrymen. Meanwhile, Hollywood studios will concede to making changes to their films to appease China's censors and access the market, thereby making it harder for Chinese filmmakers to fight against censorship. SCORE: 1. Correct on all fronts. Should rely more on my colleagues.

Well, my math is better than my crystal-ball capabilities, so I can report that I went 6-for-14 by the above grading — nice if you’re a baseball player (a .429 batting average) but not great for much else. So 2015 is shaping up to be a big year, not just for obvious geopolitical reasons but because if I cannot manage a better outcome I will slip into the red, the below-50 percent category, in my brief history of doing this on the Asia front.

Care to send any of your own Asia forecasts our way? Leave a comment below, or post to Twitter or Facebook using #Asia2015. There’s a lot of ground to consider: the first full years for Jokowi, Modi, and Afghanistan’s Ashraf Ghani; whither Xi Jinping’s rebalancing act, and where will China’s GDP number land? What about other GDP booms and busts? There are the ongoing struggles against ISIS and against climate change (late 2015 will see the major Climate Change Conference in France); disputes on the seas and along any number of difficult Asian borders; and sadly there are nearly always flareups in previously peaceful parts of the continent.

I will continue the prediction inflation — adding one to make it “Fifteen for '15” — and post in this space early next week. And also next week — on December 17 at the Asia Society headquarters in New York — we will have a group far better-qualified than me to give us their forecasts. Ian Bremmer, Ruchir Sharma and Josette Sheeran join me for our special program Asia 2015: The Experts’ Forecast. Hope to see you there, or that you’ll join us via the webcast. More than anything, I hope 2015 brings all you are hoping for, at home and beyond.

Place your cursor over the map below to review Tom Nagorski's 2014 predictions country by country.