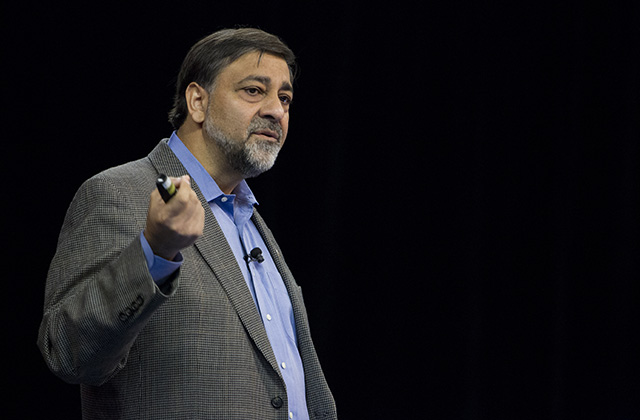 Indian-American tech entrepreneur Vivek Wadhwa has built a diverse résumé since immigrating to the United States from Delhi as a young man. In the 1990s, he developed computer-aided software engineering for Credit Suisse First Boston and then went on to found his own start-up, Relativity Technologies. Since leaving the private sector, he’s held positions with a number of universities, including Stanford and Duke, where he’s researched robotics, artificial intelligence, synthetic biology, 3D printing, and lectured on topics like entrepreneurship and public policy. Time magazine has named him one of the 40 most influential minds in tech and outlets like The Wall Street Journal and The Washington Postregularly publish his commentaries.

As a distinguished fellow of policy and research for Singularity University, Wadhwa has taken an unusually bullish view on technology and how fast it will develop in coming years. He’s written critically on U.S. immigration policy, including in his best-selling book The Immigrant Exodus: Why America Is Losing the Global Race to Capture Entrepreneurial Talent, arguing that the U.S. can ill-afford to sacrifice immigrant talent amid this rapid technological transformation. In an interview with Asia Blog, Wadhwa discussed American immigration and some of the implications of the coming technological progress — from fighting global warming to upending China’s manufacturing sector.

How welcoming is Silicon Valley for Asian immigrants and Asian Americans now?

It is still the most welcoming place on Earth for immigrant entrepreneurs. The challenge is getting a visa that allows you to work here or start a company.

So if you were put in charge of U.S. immigration policy, what would you do?

I would focus policy on bringing in the people who can help the country retain its competitive edge: the innovators and entrepreneurs. We also need to have broader immigration to keep the country vibrant and the economy growing, but in this era of exponentially advancing technologies, innovation is more important than ever and smart people are the key.

The advantage that the U.S. has is that the world’s best and brightest still want to come here. This will not always be so — especially if we lose our competitive edge. What I am prescribing is that we do more of what has made America great.

What hurdles did you personally face as an immigrant in your tech entrepreneurship career?

In America there are greater opportunities than hurdles for entrepreneurs. There is always subtle discrimination and there are always challenges in building networks. But these can be surmounted because America welcomes diversity and dissent and rewards and embraces people who fight the odds and achieve success.

You’ve taken a rather bullish view on the development of manufacturing technology, arguing that advances in robotics and other technology will be America’s gain and wreak havoc on China’s manufacturing industry. How do you see things playing out in China amid these technological advances?

China is trying to embrace the advances in robotics and 3D printing. The problem for them is that this will only accelerate the demise of their manufacturing industry and cause greater unemployment. Their 3D printers and robots are no more productive than ours are. Why ship raw materials half way around the continent and then ship finished goods back when you can manufacture locally for a lower cost?

China has a lot to worry about. Its long-term success is by no means a certainty.

Another field you’ve been more optimistic than most on is clean energy. Do you think technological development will be able to transcend politics to rein in the catastrophic effects global warming is expected to bring?

I see a race between the forces of global warming and technology. Within 15 years, we will have the ability to produce 100 percent of today’s energy needs through clean technologies such as solar and wind. Within 20 years, these will be practically free — just as cell phone minutes are and access to knowledge is. Over the next five to seven years, electric cars will be price competitive with fossil fuel burning ones. Within 10 to 15 years, they will cost a fraction of the alternatives. By synthetically producing meat, we will have the ability to dramatically reduce greenhouse gases from animal production. There are many other advances on the horizon which will change the equation. What I don’t know is how much damage we will do to our environment in the meantime.

What technology currently under development gets you the most excited?

It isn’t one technology. It is the fact that many technologies are advancing and converging. We are getting closer and closer to the Start Trek future we dreamed of. Believe it or not, it is happening!