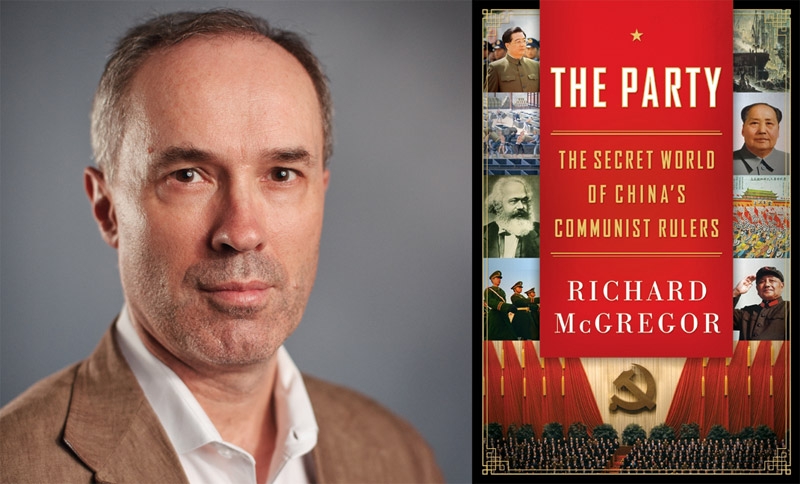 For an institution that governs one-fifth of the world's population, the Chinese Communist Party had remained opaque and mysterious to the outside world. Few, including Chinese people themselves, have much of an understanding of how the party organizes itself, enacts policy, and determines which men and women hold positions of power. In his book The Party, Financial Times journalist Richard McGregor provides the most illuminating and comprehensive study yet into the mechanisms of the Communist Party, shedding light on areas which had previously eluded understanding.

McGregor, now the Washington bureau chief for the Financial Times, was awarded the third annual 2011 Asia Society Bernard Schwartz Book Award for The Party, an honor for which he will be presented a $20,000 prize today during a luncheon at Asia Society New York. Asia Society Associate Fellow Jeffrey Wasserstrom, who reviewed The Party for The Daily Beast last year, interviewed Richard McGregor about China, the party, and whether things might change in the future.

You divide up your book into considerations of different aspects of the Chinese Communist Party's system of rule. Which chapter did you find it easiest to research and write and which did you find the most difficult, due to the complexities of the issues or the pragmatic challenge of finding out information about the subject?

The most difficult chapter to write was the one on the military. They are the most inaccessible institution in China and I only felt comfortable writing the chapter after travelling to Taiwan. I didn't find anything easy but perhaps the last chapter on history wasn't too bad, as I felt more familar with that topic.

Looking back at the period since you finished the book, what stands out as significant trends or news stories that fit in with the framework you provide in The Party?

I think the basic framework holds, despite the dizzying pace of change there. I would point to two things to argue that point: the more confident and aggressive foreign policy in Asia, which has of course brought with it a significant blowback; and the crackdown on dissidents earlier this year, which underscored the determination of the CCP to keep a tight grip on power. The CCP prefers cooption to coercion, but if they have to coerce, they will.

Is there anything that has happened since the time that the book appeared that makes you wish you could go back and tweak your text?  Or, to put this another way, if the book were to go into a second edition, any thoughts on what you'd want to do to bring it up to date?

The book only scratches the surface. Mind you, it scratches the right surface, but still, there should have be a chapter on the United Front department and the management of culture. I just ran out of time. Also, I am sure the writing and the pacing of the chapters could also be improved. Maybe I could have written more about the dynamic of change in China but that was not the point of the book.

How important do you think the upcoming leadership transition is? Do you see this as a kind of non-story — especially in contrast to the up-in-the-air American presidential contest that you've begun to cover so effectively for the FT now — since we already know who will claim the top spots and have a pretty good sense of the composition of the Politburo's Standing Committee? Or do you think it will be interesting, nonetheless, because of the questions hovering over where Bo Xilai will end up in the new administration or some other wild card factor?

It is definitely not a non-story, if that makes sense. But equally, it is not an automatic harbinger of change. Westerners have always projected their views onto China, with the assumption that their system will naturally evolve to be more like ours, which I think is wrong.

Bo Xilai is one person to watch because of audacious behavior in Chongqing. Xi Jinping is also a vastly different character to Hu Jintao: more personable, outgoing, confident and opinionated. That has to account for something for China's management of its global diplomacy and image.

If you could ask Hu Jintao one question — and get a straight answer from him about it — what would it be?

What deals did you make with your Politburo colleagues and party elders to get the job of party secretary? After all, the CCP is pre-eminently a political machine and that is how political machines work.