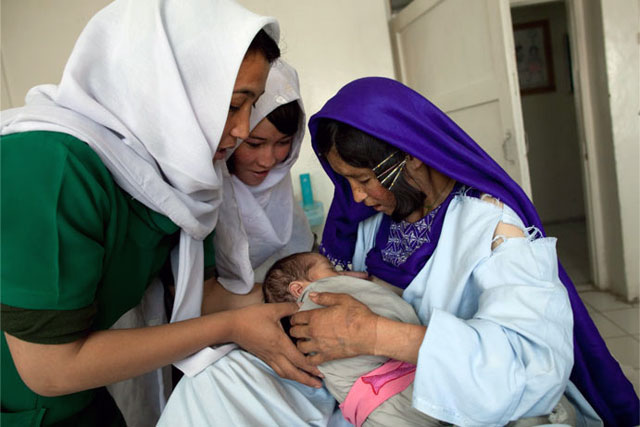 Doctor Severine Caluwaerts is no stranger to dire health situations. She has treated women in countries racked by war, poverty, and political unrest. The doctor says Afghanistan has been a particularly tough country in which to implement crucial health standards for women — due in part to decades of war, in part to social stigmas concerning women.

Dr. Caluwaerts shares her personal experience with these issues in New York City this Thursday, October 3, as part of Asia Society's panel discussion "Future of Freedom: The Fight for Women's Rights in Afghanistan." She will be joined by Gülden Türköz-Cosslett, Director of the Programme Support Division at UN Women, and Ambassador Melanne Verveer, former United States Ambassador-at-Large for Global Women's Issues, along with Shabana Basij-Rasikh of the School of Leadership, in discussion with moderator Elizabeth Rubin. The discussion will also be a free live webcast at AsiaSociety.org/live at 9:00 am New York time.

Ahead of the October 3 event, the referent gynecologist for Médecins Sans Frontières (MSF), or Doctors Without Borders, spoke with Asia Blog about practicing maternal health in Afghanistan and some of the differences between humanitarian work and human rights efforts.

Where does the health of women in Afghanistan fall compared to other countries in your experience, and can you provide an example of the conditions you found?

I worked before in Congo (DRC), Sierra Leone, Niger, Burundi, Ghana and Pakistan in maternal health. Unfortunately way too many women die in Afghanistan of completely preventable causes such as bleeding, complications of high blood pressure or complications of serious infections. This is comparable to some African countries where I worked, such as Congo or Sierra Leone. The hospitals are just not there or not well-equipped, our patients live very far away and need to travel sometimes for days, the war makes it dangerous to travel and entire areas of the country are inaccessible. Culturally, women are very often not valued, and not seen as "worth to invest in." A woman can never decide for herself in the Afghan culture — it is always the husband or the father-in-law who makes the decisions, such as the decision to come to the hospital.

A mortality survey by the Ministry of Public Health shows that 47% of deaths among women aged 20-24 are related to pregnancy. What can be done, or is being done, to try and improve these statistics?

Fifteen percent of all women, be it in Europe, the U.S. or Afghanistan, suffer from a potentially life-threatening complication at birth (such as bleeding, infection, a baby that cannot come out because the pelvis of the mother is too small). Some women are more at risk than others but it is impossible to predict with 100 percent accuracy who is going to have these complications. That is why all women should have access to quality health care. This means a safe delivery, with the necessary material, the necessary cleanliness and a trained nurse or midwife (or doctor). If necessary, she (and her baby) should have access to a blood transfusion and caesarean section. These services are still unavailable in many areas in Afghanistan.

Universal health care access at this moment is only a faraway dream in Afghanistan. In Khost, where the MSF project where I worked was situated, MSF provided quality free health care for 1,000 women and their babies per month. MSF did the same in Lashkar Gah and in Kabul. But more long-term efforts in Afghanistan are needed. Doctors, midwives and nurses are scarce, especially in rural areas outside the capital, Kabul. The drugs are too expensive, or expired or just not there. Hospitals are very poorly equipped. Family planning was forbidden during the Taliban government between 1997 and 2001 and is still very difficult to accept culturally. Women who have had many children (six or more, and this I saw daily in Khost) are more at risk to die from complications. Sometimes the woman wanted family planning but it was the mother-in-law who refused or the husband who did not agree. Family planning itself can reduce the numbers of mothers who die by 30 percent. More culturally adapted efforts are definitely needed.

It is true that health care has improved over the last 10 years in Afghanistan (and this is also reflected in increased life expectancy for men and women, and improvement in maternal mortality). However, much more should be done for the Afghan women and their babies, because unacceptably high levels of mortality persist. Investment in midwifery or nursing schools is for instance one of the practical examples that could make a significant impact.

How does humanitarian action differ from a human rights approach?

The term "humanitarian" has multiple interpretations. It's also being (ab)used in politics, by the military, aid actors and security organizations. But the original concept of humanitarian principles/action was first put forward by the Geneva Convention. Humanitarian principles (or work) are specifically valid in times of conflict (in contrary to human rights which apply at all times). The principle of "humanity" means that in all circumstances any person should be treated "humanely." In order to achieve this, assistance to people in times of war needs to be conducted by organizations who abide by the humanitarian principles: impartiality in the conflict, neutrality and independence (from political and economic forces, interest, etc.) as in the MSF charter. That is also why MSF does not accept funds from governments for its work in Afghanistan or Pakistan.

What are the particular challenges of working on women's health in Afghanistan?

The Afghan society is strongly male-dominated. Most girls and women are not valued in society and are very often seen as "reproductive machines." Only boys count in the culture. When I did a delivery and the baby was a girl, the woman very often was not happy and sometimes even crying especially when she had already many girls because she knew that the husband and his family wanted boys. Maybe the husband will even take a second wife if the first one delivers only girls.

The country has been in a state of war for more than 30 years. The Afghan national health system is completely dysfunctional. The road network is bad and patients come late for many reasons. In the culture women do not leave the house and the family very often only decides to go when disaster has already happened.

When discussing family planning (already culturally very sensitive) a woman who had had already nine children told me, "there is war in Khost, maybe tomorrow all of my children will be dead in a bomb blast. How can I choose to have family planning?" and she left our hospital without any form of family planning. I understand the way she thinks, because in the Afghan culture a woman needs children — if not, she is not a real person. There is also no birth spacing, so children are more often malnourished (the mother is still breastfeeding the one-year-old baby when the next one is being born).

The educational level of girls is extremely low (in Khost, where I worked, according to 2008 statistics, only two percent of women can read or write) and women have no decision power whatsoever.

There is an absence of qualified health providers, especially in the rural settings, and definitely female nurses and doctors are immensely lacking. One reason is that during the Taliban government, education of women was plainly forbidden and in the culture only female health care providers can take care of female patients. Since their education was plainly forbidden, it's logical that 10 years later there are just no female nurses and doctors.