How China's Restructuring Is Affecting its Asian Neighbors 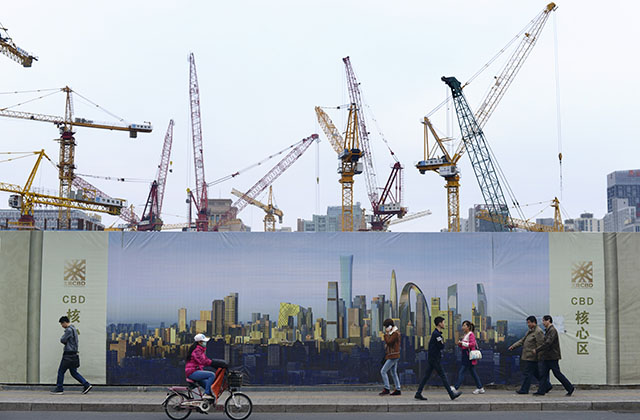 Pedestrians walk past a construction site in Beijing on April 1, 2015. (Wang Zhao/AFP/Getty Images)

Asian Development Bank's (ADB) newly released annual projections on the economic outlook of Asia predicts that China's growth will continue to slow in 2016, and, in the process, continue to restrain the economies of surrounding nations.

According to the Manila-based bank's 2016 Asian Development Outlook, which analyzes 45 Asia-Pacific countries, GDP growth in the region will dip to 5.7 percent in 2016, down from 5.9 percent in 2015. This is due chiefly to "considerable global headwinds and moderating growth in the People’s Republic of China (PRC),” according to ADB Chief Economist Shang-Jin Wei.

ADB projects that China’s 2016 GDP growth rate will fall to 6.5 percent, down from 6.9 percent in 2015 and at the bottom of the 6.5 to 7 percent range the country's government set as its target for the year. The report pointed to labor shortages, export pressures, efforts to rein in debt, and short-term negative effects from reforms aimed at reducing overcapacity as the chief causes of the slowdown.

ADB’s simulations estimate  that the drop in China’s growth may have shaved as much as 0.3 percentage points from Asia’s economic outlook. “The PRC effect is largely centered on Asia, reflecting strong regional trade and production links,” the report noted. “In contrast, the impact on the U.S. and the Euro area through trade is largely offset by the benefit of lower commodity prices.”

China’s three-decade run of consistently high GDP growth largely relied on cheap exports and heavy investment in infrastructure, manufacturing capacity, and real estate. But rising wages, chronic over-investment, and the resulting debt are now putting a damper on this model, prompting the country to put a greater emphasis on the service sector and domestic consumption. Investment — China’s main growth driver since 2001 — peaked at comprising 86 percent of the country’s growth in 2009, but consumption now makes up more than half.

This economic model shift is having a major impact on China’s neighbors, for better or worse. Countries lower on the value chain are enjoying the benefits of China’s rising wages: Vietnam, for instance, has increased its share of parts and components in Chinese imports. Likewise, Bangladesh is gaining share in the garment export market. More developed countries like South Korea, however, are losing market share in technology industries as China becomes more competitive higher in the value chain.

The ADB report also noted that China has had 48 consecutive months of producer price deflation, which is historically associated with compounding debt burdens, restrained investment, and slowing growth. “Deflation in the PRC may be transmitted to its neighbors through lower export prices, especially if the Renminbi depreciates,” the report said, noting that China’s producer prices contraction of 5.2 percent in 2015 correlated with similar effects in many neighboring countries.

The report, which looks ahead two years, predicts that most sub-regions of Asia will see growth slow in 2016 but rebound in 2017. However, East Asia — the region surrounding China — is expected to see slowing growth continue “in tandem with the PRC,” whose growth is projected to slow further to 6.3 percent in 2017.