For Those in Seoul, the North Korea 'Joke' May Be Over | Asia Society Skip to main content

For Those in Seoul, the North Korea 'Joke' May Be Over 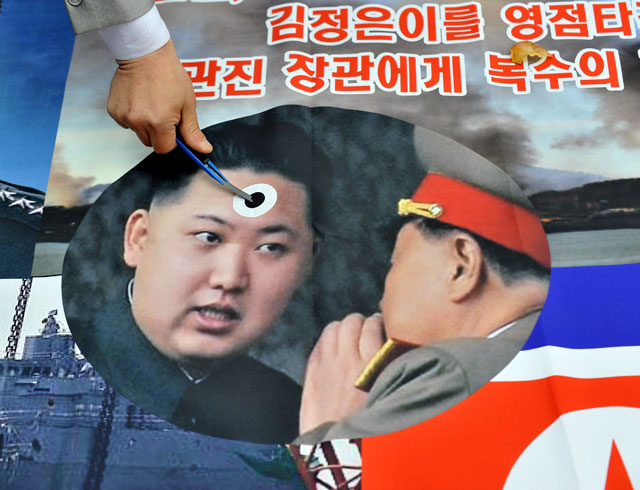 A South Korean activist stabs a pocket knife on a picture of North Korean leader Kim Jong-Un (L) during an anti-North Korea rally near the national assembly in Seoul on March 22, 2013. (Jung Yeon-Je/AFP/Getty Images)

All views expressed in this article are those of the author and do not necessarily represent the views of the Asia Society.

SEOUL, South Korea — I found myself at the movie theater for G.I. Joe: Retaliation recently. While watching, I was reminded of the late Roger Ebert's review of another noisy blockbuster. "If you want to save yourself the ticket price," he wrote, "go into the kitchen, cue up a male choir singing the music of hell, and get a kid to start banging pots and pans together."

The film, like so many these days, featured a silly caricature of North Korea and its leadership. North Korea has become the go-to buffoon villain in lowbrow Western entertainment. It is easy to understand why. To move a hackneyed story along using what is perceived as a mysterious, monolithic, friendless villain certainly helps. This is especially true when the villain can double as comic relief, stuffed into a Mao suit and wearing purple sunglasses.

I also watched some cable news over the weekend. The talking heads seem to enjoy speculating about possible war scenarios. From the safety of Atlanta, Washington, D.C., and other U.S. cities, analysts discussed potential casualties with the same light tone used by retired NFL quarterbacks on pre-game shows.

Back in Seoul, meanwhile, "Gangnam Style" rages on. While I watched my movie, millions of Seoulites dressed in the popsicle colored fashions of this spring and continued to "play" uninterrupted. Many South Koreans respond to any mention of North Korea with a combination of apathy and annoyance. Especially to the glorious K-pop youth, talk of North Korea is a tired ghost story, so uninteresting, such a downer, so gauche.

Maybe this is the way it should be. As we have done before, maybe it is best to ignore the whole mess and move forward leaving the North behind in the muck as we build our glimmering Oz in Seoul, Busan, and beyond. In any event, the North is most likely just puffing its chest at the new South Korean president (the daughter of Kim Il Sung's great rival) and the rest if the world because it can.

I was here in 1994, the last peak in North-South tension. I was also here during most of the other significant, terrible events that have occurred in Korea over the past 19 years. If history teaches us anything, this will all fade and be forgotten in a few weeks.

Yet as we close our eyes and smile, things get worse. The North's missile technology continues to develop; soon they will likely be able deliver nuclear war heads to the mainland U.S. That terrible technology (and all manner of other contraband) continues to leak out. The North Korean leadership structure becomes more opaque and unstable.

And, with almost alien like stealth warcraft flying overhead, the war cries of the U.S. and North Korea become more loud and impassioned with each round of provocation. Worst of all, the stories of incredible human tragedy and bizarre cult-like behavior ceaselessly flow from sources as diverse and strange as defector reports and the words of former basketball stars and Japanese magicians (which, sadly, seem to be our best sources of intelligence at the moment).

From just a few steps back, we can see that this is an untenable situation. It has been easy to laugh away and ignore (even for me) before, but that is getting harder and harder to do. Eventually, the North Korean nightmare may spill beyond its borders.

The shelled homes in the West Sea and heartbroken families of lost sailors tells it really already has. Efforts have been made before to bring North Korea into the international community and give them a stake in a continued peaceful existence, but more must be done. We cannot choose to be consoled by jokes and gossip any longer.