Dan Rather: Those Who Doubted China's Rise Underestimated 'Power of the People' | Asia Society Skip to main content

Dan Rather: Those Who Doubted China's Rise Underestimated 'Power of the People'

This is the fifth in a series of exclusive video interviews with veteran journalist Dan Rather, former anchor of CBS Evening News, who visited Asia Society Studios in New York City in late June. Rather, 80, currently hosts the investigative news magazine Dan Rather Reports [Facebook | Twitter], which airs on AXS TV. Rather's memoir, Rather Outspoken: My Life in the News, came out in May.

In the segment embedded above, Rather discusses the biggest changes that have occured in Asia during his time covering the region. "If you had told me," Rather said, "as late as the 1980s, that China's economic growth would be what it has become, I would've said, 'I don't think you know Asia very well, or perhaps you're smoking something very expensive.' It caught me by surprise, and the same with India."

Did it take me by surprise? Yes. I'd like to think that I or anybody else who reported even sporadically from Asia could see the potential of China and the potential of India. But, if you had told me, as late as the 1980s, that China's economic growth would be what it has become, I would've said, "I don't think you know Asia very well, or perhaps you're smoking something very expensive." It caught me by surprise, and the same with India. That, India, poverty is so deep and abiding in India. This probably exposes my ignorance, which is vast, but I could foresee a time when it came out of it and rose to the economic heights it's already reached to say nothing about what it will reach, but I thought it was much much farther down the road in both China and India, as it turned out to be the case. Which is a reminder to every reporter which every reporter needs reminding from time to time: What we most expect, often doesn't occur. What we least expect, frequently happens.

Why do you think so many people got it wrong?

How did China surprise everybody? Well, I can't speak for everybody but I know with myself and other reporters, who covered, and other people who thought they knew the area very well, we underestimated the people. A common mistake. The belief ran so strong, listen, this iron-grip Communist Party apparatus allied with a military. And yes, there'll be a day maybe when that begins to break, but it's going to be way down the road because the grip is so strong. How could the feelings of the people below possibly crack through in our lifetime? Part of it is lack of knowledge of the ancient and modern history of China, not understanding the culture, not understanding the society, not understanding the people. Seeing the country as a monolith, if you will, rather than 1.3 or 4 billion individual people. We, and I include myself in this, keep making the same mistake over and over and over again. Not understanding the history, culture, say nothing of the language, and underestimating the power of the people. 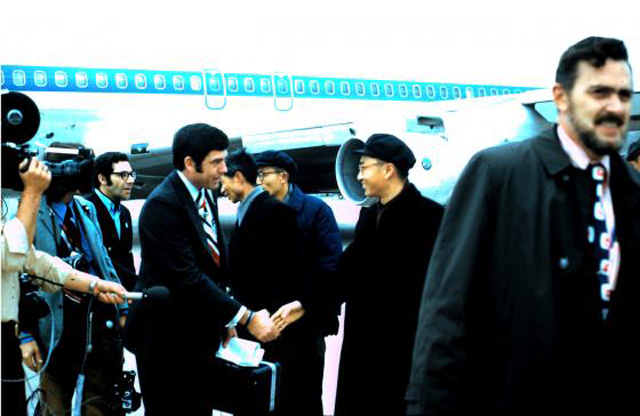