For Classic Japanese Theater Form Kyogen, 'Tradition Is Not Fixed' 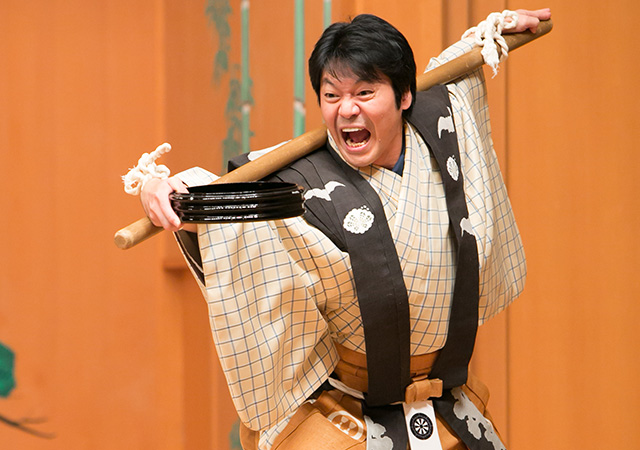 Kyogen master Nomura Manzo IX performs his craft which he learned from his father and grandfather.

In Japanese theater, it is often thought that there are three main genres: Noh, Kabuki and Bunraku. However, there is a fourth — Kyogen.

For hundreds of years Kyogen was regarded as a comedic theater form that served as comic relief during intermissions of dramatic Noh performances.

However, the theater form grew in popularity and transformed to its own celebrated, stand-alone, genre. Kyogen plays are mostly comedic spoken dramas and are easy to understand, even to those who don't speak Japanese. Unlike the well-known Kabuki genre, where actors take the stage in ornate, colorful costumes and heavy, expressive makeup, performers wear traditional Japanese costumes without any make up, and use unique vocalizations and specific methods of stepping around and across the stage. Kyogen is often regarded as a wellspring for traditional Japanese performing arts and, as such, has also been a guiding influence on other arts and iterations of Kyogen-inspired theater that developed later.

Despite being one of Japan’s oldest theater traditions, Kyogen lends itself well to adaptation, allowing the art form to continue to be passed on through the years.

“The tastes and interests of successive generations of Japanese patrons and audiences— clergy, samurai, and commoner — encouraged, indeed demanded, change in Noh and Kyogen performance, from the 14th through the 19th centuries,” editor James R. Brandon wrote in the book Noh and Kyogen in the Contemporary World.

“Within my lifetime, I saw that my father and my grandfather had very different acting styles,” Nomura Mansaku, a renowned Kyogen theater master, wrote in an essay in the book. “My grandfather felt it wasn't a successful performance unless he had the audience rolling in the aisles with laughter … To interest that kind of audience [back then] he was forced to play broadly with great energy. I would call it overacting.”

Nomura has also spent time teaching Kyogen acting at the University of Hawaii, the University of Washington, and in Tokyo. Though the product of his instruction varies from city to city and by age, the essence of Kyogen remains: “Kyogen changes with the personality of each actor, with each audience, and with each age.”

Another large part of what keeps the vibrant tradition of Kyogen active is the ability to share a universally understood narrative through comedic timing and shtick, rather than prose. Kyogen theater positioned itself in global theater particularly as relations between Japan and the West flourished in the last century.

“For Western audiences, Kyogen is perhaps the most accessible Japanese theater form,” Brandon wrote. “Performances are invariably considered interesting and modern, even though audiences don’t understand the verbal humor of these comedies, while Western reaction to Noh is very different — respectful but muted.”

Though Kyogen is not as rigid as other traditional forms of performing arts, the performances today still maintain a consistent core ethos of “openness and joy” that has existed since its inception hundreds of years ago, Mansaku says.

“Style and reality must be balanced in Kyogen: If there’s too much realism it will stop being Kyogen, if there’s too much style it will be lifeless,” Nomura said. “Balance is essential and the actors who find that balance are truly great artists, I think.”

“Therefore, as I see it, tradition is not fixed.”