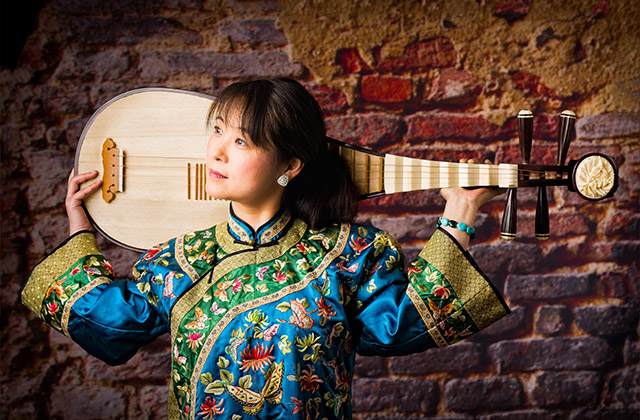 In 1972, six years into China's turbulent Cultural Revolution, nine-year-old Wu Man’s father put a traditional four-stringed instrument known as a pipa in her hands and told her to learn. She quickly excelled, and as China began to open toward the end of the decade, her skill in the instrument placed her in unique position to build bridges between her country and the outside world. In the years since, she’s sought to expose the world to both traditional Chinese music and fuse her distinct pipa sounds with a diverse set of cultural and musical genres. She has collaborated with the likes of Philip Glass and Yo-yo Ma and performed at venues including the White House and Carnegie Hall. In 2013 Wu was named Musical America’s Instrumentalist of the Year, making her the first player of a non-Western instrument to receive the award. Her latest pipa riffs can be heard in the soundtrack to Kung Fu Panda 3.

From April 28-30, Asia Society’s China Learning Initiatives will host its annual National Chinese Language Conference — the largest such event in North America. At this year’s conference in Chicago, Wu Man will be the featured performer and plenary speaker under the theme of cultural ambassadorship. Ahead of the conference, Wu chatted with Asia Blog about learning her craft in Mao’s China, and how she’s come to see music as “the universal language.” This interview has been edited for length and clarity.

What was it like learning a traditional instrument amid the Cultural Revolution?

It was a very simple life then. We only had a radio. There was no TV and not very many movies. It was basically very focused, which in some ways is good for a kid who wants to learn something. There were no distractions. Musically, I remember we played some traditional repertoire quietly at home with the teacher, but publicly, we had to play something very different — revolutionary songs and propaganda songs. During the Cultural Revolution, everything old was basically forbidden. A lot of old temples and old traditions were destroyed, including music.

In concert halls you had to play something like “The East is Red”; we had eight modern theater pieces all based on Communist Party stories, which were like Broadway shows except the storyline was very much propaganda. In private, it was ok to learn traditional music because the pipa is a traditional instrument, so there wasn't much modern music [to play with it]. We sometimes played traditional tunes in public; we just put different lyrics to them — all about worshipping Chairman Mao or the Party. When I started playing in the 1970s, music in China was pretty much like that. There was no Western music — just modern propaganda music or traditional Chinese forms, but with changed lyrics, stories, ideas … everything.

How did that begin to change?

In the 80s we slowly became allowed to play old tunes. The first time I remember doing so was in 1978, when I auditioned for the Central Conservatory of Music in Beijing and I played the keys for the “The Dance of Yi.” The song was composed in the early 1960s by a pipa master, but during the Cultural Revolution it was forbidden to play it publicly. But I learned privately, so when I auditioned in 1978 I played this piece and then the central radio recorded my solo and invited me to play in a stadium and put it on TV throughout the nation. This was a huge deal.

I didn't know it at that time — I was only 12 — but later I realized that we were receiving a message that said, “now we can play something besides revolutionary songs.” “Dance of Yi” had been forbidden because the Yi people live in the mountainous southwest part of China, in Yunnan and Guangxi Provinces, and are very good at dancing and singing. So young people who were dating listened to the music because it was about boys and girls meeting, dating, and dancing together. That kind of love scene idea during the Cultural Revolution was forbidden. You had to love the Party and Mao, not your girlfriend or boyfriend (laughs).

What was it like when you first came to the United States?

That was in 1990, and I came here with culture shock. I was starting from scratch, from zero. I didn't understand the language, had no friends, and nobody knew Chinese music or what a pipa was. A lot of Americans were very unfamiliar with China 25 years ago, and I was a little depressed because nobody knew what I was doing. On the other hand, it was fascinating to me because there was such diversity in New York, and in this one city I could hear so much different music.

When did your music first come under Western influence?

In music school, we learned chords from Western classical music. I think the most recent music we heard was from the 19th century — nothing from the 20th. So of course we knew Mozart, Bach, Beethoven, and Russian-style music. In class we had to listen to those symphonies and analyze them. But the first time I heard a symphony live was when the Boston Symphony Orchestra came to China in 1979 and played Beethoven’s 5th.

The following year, [American violinist and conductor] Isaac Stern came to my school and taught a class. It was packed — people had come from all over China and were standing there. The class also really influenced me. It was so different than my tradition, but there were some things that were very similar. He talked about how you communicate with the audience and asked about how, on stage, you could play for the people in the last row. In my tradition, we never asked that question. But we do teach you to communicate with the audience. When you're on the stage, you suddenly go somewhere else. You're not yourself, and you start talking to the audience when you present your music to them.

How important do you think musical experiences like this are in bridging cultures?

We always say music is a universal language that bridges the east, west, south, and north. When my English was very bad in the early 90s, I played with musicians in New York, with jazz musicians and quartets, and worked with a composer. I barely spoke because my language was bad, but through music we understood each other. Later on, I worked with the Silk Road Ensemble and there were so many different languages and people from different cultural backgrounds. We didn’t talk, we just played. So music is a bridge. It connects us. And the bridge also connects us with the audience.

That's why I started working with composers to create new pieces that are in a new form, not only with Chinese traditional instruments, but also with Western classical instruments, African instruments, jazz musicians, and electronic music — and with different genres like theater and dancing. This is not only to bridge different sides, but also to really work together and create something new, something kind of modern, with a more current language to reach audiences.

What made you want to get involved with Kung Fu Panda 3?

First of all, I'm a huge fan of Kung Fu Panda. When I got an email from them offering to have me record, I said, “Of course, of course, yes, I'm a big fan!” I think the film contains a lot of Chinese traditional musical and cultural elements — the kung fu, pandas, chopsticks, food, and the village — but the sense of humor and the story are very much American. So again, it bridges two cultures, two traditions, and becomes something else — a very modern story. You know, the panda's father is a duck in the movie. Chinese people would never have thought to do that (laughs). So for me, even though it's a small role just to play pipa in the soundtrack, I’m very glad to be a part of this creation.

In the below video, watch Wu Man perform at Asia Society in New York in 2013.