Can Aung San Suu Kyi Follow in the Footsteps of Walesa, Havel and Mandela? | Asia Society Skip to main content

Can Aung San Suu Kyi Follow in the Footsteps of Walesa, Havel and Mandela? 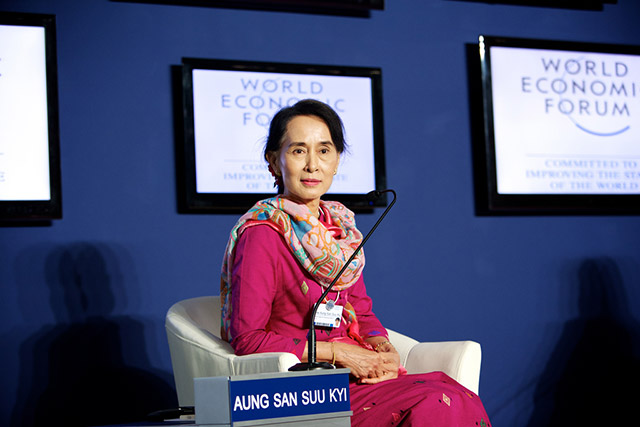 Aung San Suu Kyi wants to be president. What not long ago would have seemed a distant dream, or fantasy, is now an utterly understandable aspiration. "There are those who say I shouldn't say I would like to be president," Suu Kyi told a World Economic Forum panel in Myanmar Thursday. "But if I pretended that I didn't want to be President I wouldn't be honest, and I would rather be honest with my people."

Suu Kyi has never been seen as less than honest, never less than steadfast in her resolve. Today the woman who spent the better part of two decades in various forms of detention is free and a member of parliament, but she is ineligible for Myanmar's highest office; the constitution says the president cannot have a child who is the citizen of a foreign country, and Suu Kyi's two sons are British nationals. But constitutional changes are in the offing. A change to the presidential rules might be among them.

So it is altogether possible that Aung San Suu Kyi will soon march in the footsteps of other remarkable dissenters-turned-rulers. Lech Walesa in Poland. Vaclav Havel in Czechoslovakia. Nelson Mandela in South Africa. Three very different men — though, like Suu Kyi, all three passed long years as prisoners of conscience, all were awarded the Nobel Prize for Peace, and all three led movements that brought tyrants to their knees.

Such comparisons of nations and individuals are difficult, of course. Walesa could be gruff and obstinate — traits better suited to the dissident than the head of government. Havel was, above all, a thinker, in many ways a revolution's poet. And Mandela's 27 years in a cell constituted a trauma and ordeal almost without parallel in modern times.

Their nations are different, too. Race hung over Mandela's presidency — though a magnanimity towards past oppressors served him well. In Walesa's and Havel's central Europe, the two men had the benefit of geography, sitting as they were in the heart of a prosperous continent.

This week, Coca-Cola CEO Muhtar Kent suggested a historical parallel, saying that Myanmar's opening was "a great moment in history … just like it used to be when we opened up our business in east and central Europe after the fall of the Berlin Wall." True enough, but Suu Kyi's nation is emerging not only from a dark tyranny, but from an era of extreme economic isolation as well. Myanmar starts its democratic era with a per capita GDP of $1,400, 205th in the world, with huge deficits in infrastructure and capacity.

I first met Aung San Suu Kyi in her pre-prisoner time, nearly a quarter century ago. It was the spring of 1989 and she was testing the ruling junta, traveling the country, speaking to large anti-regime crowds when even small gatherings were strictly forbidden.

A few months before, soldiers had shot and killed hundreds of student demonstrators, and when we met in her lakeside villa, Suu Kyi said she could not "remain indifferent" to the crackdown. She also preached a peaceful opposition, sprinkling her speeches with references to Gandhi and Martin Luther King.

"I certainly don't want any more people to be shot," she told me. "But this does not mean we are going to sit back weakly, and do nothing."

Twelve days later, Suu Kyi's villa was cordoned off by soldiers. It was the beginning of a two-decade-long repression.

Suu Kyi said later she kept in touch with the outside world, and maintained her sanity, thanks to radio broadcasts of the BBC World Service. There she could hear, in her first year of house arrest, about Central Europe's revolutions, and the breaching of the Berlin Wall. A few months after that, Nelson Mandela made his memorable walk into sunlight, and freedom.

It would be more than 20 years before Myanmar's turn. And it was only last year that Suu Kyi was able to travel to Oslo to claim her Nobel Prize. "We have been waiting for you for a very long time," the Nobel Committee Chairman Thorbjorn Jagland told Suu Kyi.

For her part, Suu Kyi insisted that despite all her struggles, she carried no appetite for revenge. "What I want most," she said, "is reconciliation and not retribution."

It had been her long-time message — much like the words she had chosen in the interview in her home, 23 years before. "Civil disobedience has a great history," Suu Kyi said then. "That is why I mention Mahatma Gandhi, and Martin Luther King. Martin Luther King said to the people, 'I have a dream.' Well, in a way it is the same with us. We just want to bring our dreams to reality."

Now Suu Kyi dreams of running her country. The people of Poland, the former Czechoslovakia and South Africa might caution: the qualities and skills required of national leaders are nothing like those that produce towering figures of conscience.

Somehow, though, it seems foolish to bet against the woman in Myanmar who has come this far.

Visit Asia Society headquarters in New York on June 26 for Myanmar in Transition: Opportunities & Obstacles, a panel discussion that will launch a new Asia Society report.