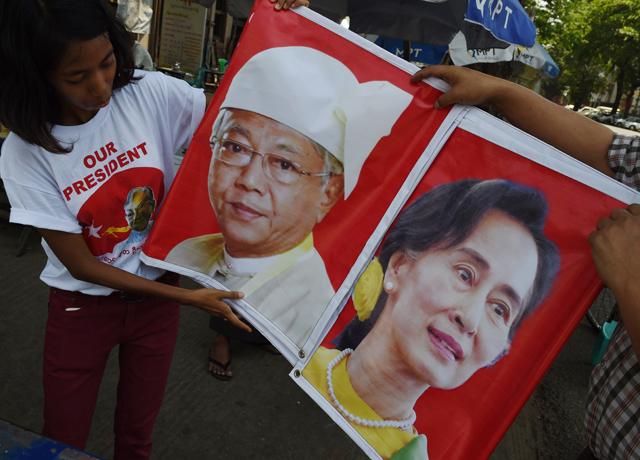 Myanmar’s historic general election last November brought a landslide victory to the Aung San Suu Kyi-led National League for Democracy (NLD), and punctuated the significant strides made in the democratic transition in the past few years. Myanmar’s parliament elected NLD’s Htin Kyaw as President in March, marking the first peaceful and democratic transition of power in more than 50 years. With the new administration's political cabinet finalized, questions remain regarding the Nobel laureate's new roles and future responsibilities. What are the new administration’s key priorities? What can we expect for the relationship between the new administration and Myanmar's military?

Priscilla Clapp, Senior Advisor to the Asia Society Policy Institute, served as the U.S. Chief of Mission in Myanmar in 1999-2002. She authored the recent Council on Foreign Relations report, Securing a Democratic Future for Myanmar. On April 22, she delivered a briefing on Myanmar’s political transition as part of ASPI’s AsiaConnect series. Below are condensed and edited excerpts from her remarks. A full recording of the briefing can be heard using the audio player below.

On Aung San Suu Kyi’s role in the new government

The parliament, undoubtedly at Aung San Suu Kyi’s direction, created a position of State Counselor. The NLD took a provision in the constitution and formed it into a position that allows Aung San Suu Kyi very wide authority to work across both the legislative and the executive branches, something that wasn't possible in the last administration, the Thein Sein administration. I think it will help a lot to have much better coordination between parliament and the executive.

Aung San Suu Kyi is also the Foreign Minister. This position gives her two advantages: First, she sits in the National Defense and Security Council, where major foreign policy and security decisions are made. She's one of the civilians on the council. Civilians are actually a minority, but I think with her leadership, the minority will have a large voice in that council. And secondly, it puts her in charge of the country's foreign policy. By choosing her first meeting to be with her Chinese counterpart, she has already made it clear to both the Chinese and the military that she will be the one managing this relationship.

And the third position she has is Minister of the President's Office, which gives her wide latitude in directing and coordinating all of the ministries in the government. She’s clearly in a very powerful position, probably the most powerful, on par with the commander-in-chief, and that's good.

On leadership in the parliament

It’s clear the new leadership wants to make the government much more effective, much more efficient, and far less corrupt. They have reduced the number of ministries drastically, from around 30 down to 21. President Thein Sein had six ministers in his own office, who were sort of "super ministers." That's been reduced to one — Aung San Suu Kyi. Other ministries have been combined. So they have streamlined the ministries already.

Apparently they've decided to keep the permanent secretary that was set up under the last government towards the end of the five-year period. The permanent secretaries are designed to create a decision-making layer that hasn't existed below minister-level in order to streamline decision-making and get it closer to the working level, where people can make informed decisions. The ex-military ministers that had been running the ministries for so many years often didn't know what they were doing. I think that the NLD is trying to make the decision process better-informed and more efficient.

On the new government’s priorities

Pursuing the peace process is another objective — Daw Suu made that very clear in her public remarks. She addressed it recently in her New Year’s speech, saying that she was going to more or less keep the current ceasefire process and that she appreciated what the previous government had achieved. I wouldn't be surprised if she focuses particularly on the political dialogue, which started in January. The structure of the political dialogue no longer makes sense because it includes blocs of people that are no longer in the government. The dialogue has to be restructured. I think that she will want to empower the political voices in the peace process, and not leave it strictly to military voices.

There will be a heavy legislative agenda with the NLD. They are a majority in the parliament, they have very wide leeway for passing new laws and removing old laws. I think we're going to see them trying to clean up the legal basis for their country, and particularly get some of the laws that are hangovers from the colonial period off the books, because these are the laws that have been used for repression. There will be a lot of emphasis on sustainable development, not just for the sake of building big projects. I think they'll try to make development work for the people, with the least disruption to the people.

Click below to listen to the full Priscilla Clapp briefing on Myanmar:

Molly Bradtke is a Program Associate with the Asia Society Policy Institute in Washington, D.C. and assistant to ASPI Vice President Wendy Cutler.