Asian Athletes Are Turning In Historical Performances at the Olympics 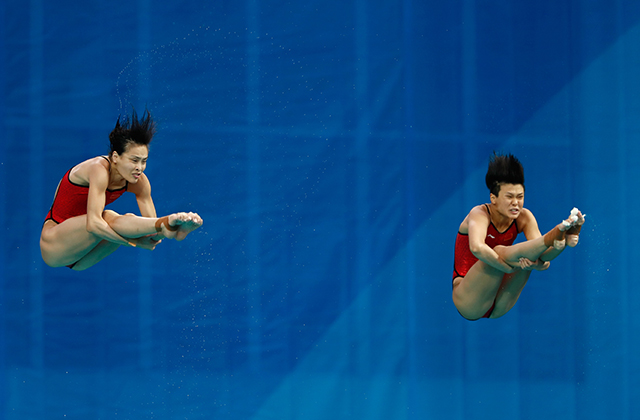 With the 2016 Summer Olympics in Rio de Janeiro in full swing, spectators have witnessed historic performances from athletes from all over Asia.  Here are some highlights:

Appearing at her fourth Olympic Games, the 30-year-old diver Wu Minxia broke several records when, alongside diving partner Shi Tingmao, she took the gold in the women’s synchronized three meter springboard event on Sunday afternoon. The pair finished a comfortable 31.77 points ahead of Italy, who took the silver.

China also has a chance to take gold in all eight diving events, which would be the first time a country would do so during the Olympics. On Monday, 20-year-old Chen Aisen and 25-year-old Lin Yue brought home the gold for their country in the men’s 10-meter synchronized event.

Dmitry Balandin brought home the landlocked country's first medal in Olympic swimming, taking gold in the men's 200 meter breaststroke event. Along with the win, the 21-year-old Balandin is now also the national record holder with the time of 2:07.46.

Additionally, 23-year-old weightlifter Nijat Rahimov also contributed to the central Asian country's medal count in Rio, winning the gold in the 77 kilogram weight class with a world-record setting clean and jerk at 214 kilograms.

The 25-year-old weightlifter Hidilyn Diaz became the first ever woman to medal in the event for the Philippines, taking the silver in the women’s 53 kilogram weight category.

South Korea’s women’s archery team has dominated the sport since it was first introduced as an Olympic event in 1988, earning the gold medal in eight consecutive Olympic Games, including Rio. This year Ki Bo-Bae, Choi Mi-Sun, and Chang Hye-Jin are the athletes that have continued that legacy.

Singapore's Joseph Schooling won the first Olympic gold medal for the country during the men's 100 meter butterfly event. In addition to setting an Olympic record, at a stunning 50.58 seconds, the 21-year-old swimmer upset the Olympic great Michael Phelps in the competition. Phelps tied for the silver medal with South Africa's Chad le Clos and Hungary's László Cseh.

Weightlifter Sukanya Srisurat took home the gold for the women’s 58 kilogram weight class, obtaining an Olympic record snatch at 110 kilograms, before lifting 130 kilogram in the clean and jerk. The 21-year-old Srisurat is appearing in her first Olympic Games.

Gymnast Oksana Chusovitina had already accomplished so much prior to arriving in Rio — she won gold medals in the vault at the 1991 and 2003 World Championships, the 2002 Asian Games, and earned a team gold medal from the 1992 Olympics in Barcelona while representing Germany. In Rio, Chusovitina qualified for the vault finals, which will take place on August 14.

Though she did not medal in the vault final, coming in seventh place, she has already made history — the 2016 Games will be the 41-year-old veteran gymnast’s seventh Olympic competition, becoming the oldest female gymnast to ever compete.