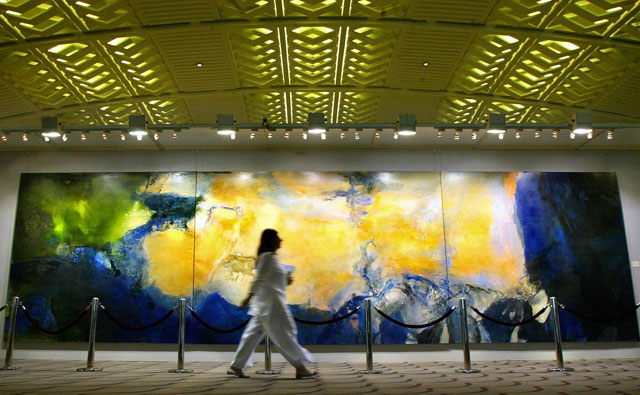 A woman walks past the world's largest triptych ever, produced by painter Zao Wou-ki and displayed at the Christie's Hong Kong Spring Auction preview in Hong Kong on May 26, 2005. (Philippe Lopez/AFP/Getty Images)

This Tuesday, November 20, Asia Society Hong Kong gives audiences an opportunity to become acquainted with one of the major figures in contemporary Chinese art, when panelists will discuss the life and career of Zao Wou-ki.

Born in Beijing in 1921, Zao has lived almost exclusively in France since 1948. His oils and ink paintings are in the collection of the Guggenheim, among many other museums worldwide, and have sold at Christies for as much as $5.89 million U.S. A 2009 Hong Kong exhibition of Zao's recent work led the New York Times to call him "arguably China's most important living artist."

One of the featured panelists at Asia Society Hong Kong tomorrow evening is art historian and curator Melissa Walt, the author and co-author of several monographs on contemporary Chinese art and currently a Visiting Scholar at Colby College in Maine, who is also collaborating on an exhibition of Zao's work. Reached via email, Walt explained some of the traits that make Zao's art so distinctive:

I believe Zao Wou-ki to be one of the giants of modern and contemporary painting. Nurtured in the cosmopolitan atmosphere of pre-war Shanghai and post-war Paris, Zao's artistic development has drawn on a rich variety of inspirations and friendships, from Lin Fengmian and Wu Dayu, to Paul Klee and Henri Michaud.

His oil painting style evolved through stages, each revealing the strong, clear vision with which he approaches his work, whether experimenting with signs and written forms, or exploring the dynamic possibilities of gesture and broadly applied color fields. The breadth of Zao's experimentation in different media and techniques (lithography, oils, ink) further distinguishes his artistic achievements.

In Walt's view, Zao's cosmopolitanism also makes him an exemplar for a later generation of border- and boundary-crossing artists.

Zao Wou-ki's fame, quite deservedly, lies in his reconciliation of the visual poetry of Chinese ink painting with 20th-century modernist idioms. Extraordinary for his time, place, and generation, Zao, his career, and his work refute the usual boxes into which we place artists. Instead, he can be seen as preceding by nearly a half-century, a phenomenon that today seems commonplace — that of the trans-global artist.