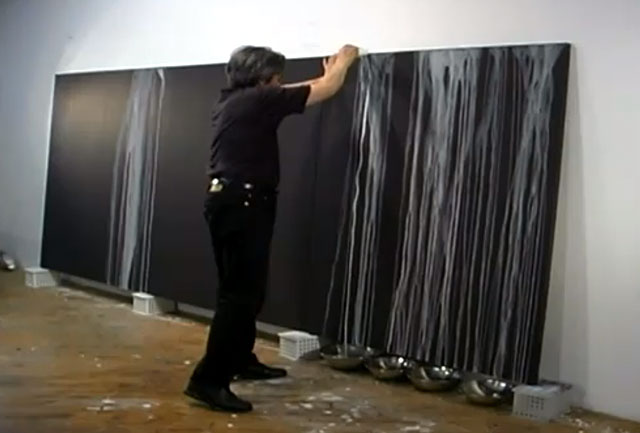 Painter Hiroshi Senju at work, from his video profile.

One of the most well-regarded and highly original painters in Japan today, Senju was featured in Asia Society Museum's group exhibition The New Way of Tea in 2002. "He has pioneered and redefined a new era of modern Japanese painting," announced a press release for the Sundaram Tagore Gallery to mark the opening of a 2008 group show that included Senju. "His vision is modern, created with a thousand-year-old Japanese traditional method of painting."

A great deal of Senju's work contends with the depiction of nature and conveying its evanescence in a rapidly developing urban world. He makes his own paints from scratch, with pigments derived from seashells, minerals and corals that are then held together by animal-hide glue. The pouring of the paint is then carefully orchestrated to slide down the canvas in a manner that emulates the flow of water across a surface — hence, his famous "waterfall" series. Senju's epic canvases of sinuous, undulating paint are reminiscent of the expansive drip paintings of Morris Louis and Jackson Pollock, though Senju works entirely in his own idiom, rooted partly in his experience and background in Japanese art history.

"I would like people to feel close to my paintings," Senju said in an interview. "I use nature as a theme for my paintings because everyone can relate to it in some way. It completes my idea for art. Through my works, the audience will think about their roots, as if the painting were a mirror to their memories. This shared memory defines art as a power to break any boundaries between people."