How North Korea Is 'Evolving' to Dodge Sanctions 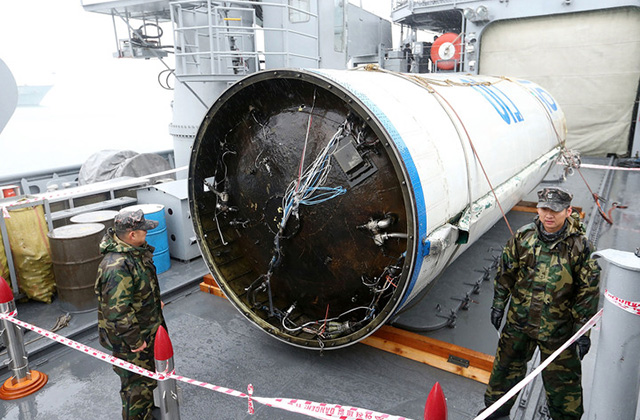 The wreckage of a North Korean rocket is seen at the Second Fleet Command's naval base on December 14, 2012 in Pyeongtaek, South Korea. The debris is the first stage of a long range rocket that launched on December 12, 2012. (Yeong-Wook/DongA Daily/Getty)

Earlier this year, the United Nations Security Council slapped increased economic and trade sanctions on North Korea in response to repeated nuclear and ballistic missile testing. But even as international punishments against Pyongyang have escalated in recent years, the country’s weapons programs have only grown more sophisticated.

“That is an inconvenient fact if you're a policymaker in Washington,” said John Park, an adjunct lecturer at the Harvard Kennedy School and researcher at MIT. “Because frankly, financial sanctions and other targeted sanctions are the only foreign policy tool that you have left.”

On September 19 at Asia Society in New York, experts will discuss tensions between the major stakeholders in the North Korean nuclear issue, and what the outlook is for a peaceful resolution on the Korean peninsula. Learn more

Park, who was speaking at Asia Society in Hong Kong, has done extensive research on the effects of sanctions on North Korea. He noted that rockets from the country recovered at sea from failed tests have been found to contain numerous components from Western countries. “So the question is, how did North Korea get these sophisticated items that the international community, through sanctions and other supplier groups and export regimes, was supposed to block?”

Park says that private Chinese companies, which have been able to procure dual-use equipment and serve as middlemen between Western suppliers and North Korea, have been a major reason. He cited a high-level Chinese delegation that visited North Korea in 2009, which included then-Premier Wen Jiabao and other senior officials. The visit was widely interpreted as an attempt to mend strained ties. “What was missed were the agreements that were signed,” Park said, pointing to innocuous-sounding deals related to economic development, tourism, and education that actually ended up boosting North Korean revenue-raising opportunities in China. “In China, the message from the senior party leadership to all of their business interests was that it's legal to do business with North Korean entities. So they essentially opened their market to the North Koreans.”

Since that visit, trade volume between the two countries has increased nearly three-fold, providing significantly more opportunities for obtaining weapon supplies. According to Park, in the past, North Korean procurers would come into China under the pretext of business trips, then return home. Now, there are many more long-term expatriates better equipped to forge business ties and develop skills to dodge obstacles created by sanctions. Increasing restrictions have also pushed “bad actors” into closer collaboration, while hindering positive engagement between North Koreans and the outside world.

“The increasing application of sanctions as it relates to denial [of procurement] strategies has led to the strengthening of North Korean capabilities,” Park said. “What we’ve been able to piece together is almost an organism that is evolving. In terms of sanctions, even if you get it right, the North Korean regime is very good at figuring out new ways to do things. It's a function of survival, as opposed to a luxury.”

Watch Park’s full remarks on how North Korea is evading sanctions in the below video.

John Park assesses the use of sanctions against North Korea, especially as they relate to its ongoing nuclear and missile programs. (1 hr., 28 min.)