Asia Society at the Movies: A Conversation on ‘Ascension’ | Asia Society Skip to main content

Asia Society at the Movies: A Conversation on ‘Ascension’ 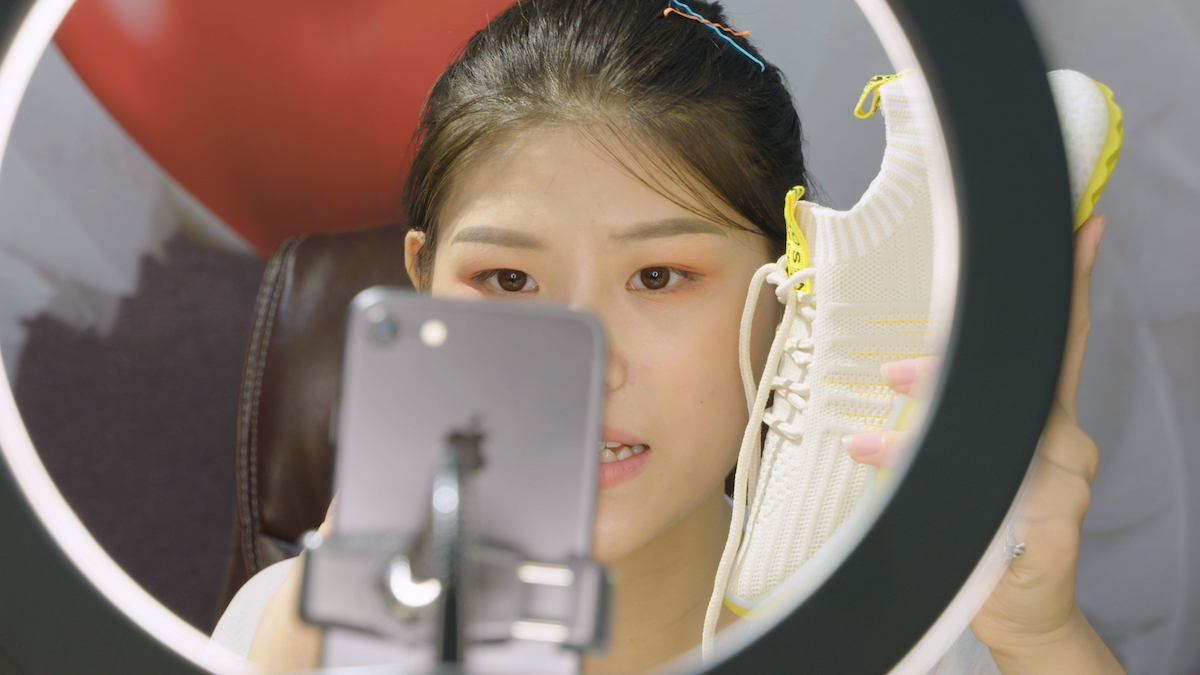 A user livestreaming to sell her product on the Chinese shopping website Taobao.com, as seen in Ascension, directed by Jessica Kingdon. Image courtesy of MTV Documentary Films.

On December 13 at 8 p.m. New York time, join a free conversation about Ascension.

Mesmerizing in its imagery and shot over four years in 51 locations across the country, Ascension is a cinematic exploration of China’s industrial supply chain that reveals the country’s growing class divide through staggering observations of labor, consumerism, and wealth. The film ascends through the levels of the capitalist structure: workers working on the factory floor, the middle class selling to aspirational consumers, and the elites reveling in a new level of privileged hedonism. In traveling up the rungs of China’s social ladder, we see how each level supports and makes possible the next while recognizing that the contemporary “Chinese Dream” remains an elusive fantasy for most. Moments of dignity and humanity serve as counterweight to the dizzying excess of production and consumption.  At this year’s Tribeca Film Festival, director Jessica Kingdon won the Albert Maysles Award for Best New Documentary Director and Ascension was named Best Documentary Feature.

Join us for a conversation about the award-winning film with director Jessica Kingdon and producer Kira Simon-Kennedy, moderated by Emmy Award-winning filmmaker Stephen Maing.

Jessica Kingdon is a Chinese-American director/producer who is based in New York. She was named one of “25 New Faces of Independent Film” by Filmmaker Magazine and selected for the 2020 DOC NYC “40 Under 40” list. Her award-winning short Commodity City (2017) is an observational documentary about the world’s largest wholesale mall in Yiwu, China. It was shortlisted for a Cinema Eye Honor and has played at over 50 film festivals including Rotterdam, True/False, and Sheffield. She co-directed the short It’s Coming! (2020), which was supported by Rooftop Films, and is currently playing festivals, and Routine Island (2019), which is included in The Eyeslicer Season 2. Jessica’s producer credits include Tania Cypriano’s Born to Be (NYFF 2019), Ian Bell’s 808: How We Respond (Sheffield 2019), Nathan Truesdell’s The Water Slide (True/False 2018), and Johnny Ma’s Old Stone (Berlinale 2016). She is a member of the Brooklyn Filmmakers Collective.

Kira Simon-Kennedy is the co-founder and director of China Residencies, a multifaceted arts nonprofit that has supported over 70 different international creative exchanges to China since its inception in 2013. She has been a fellow at NEW INC, the New Museum’s incubator for art, design and technology, as well as the IFP Made in NY Media Center, creating Rivet, a platform to connect creative people with opportunities worldwide. Her first feature film as a producer was on her older sister Ani Simon-Kennedy’s 2013 debut Days of Gray, live-scored by the Icelandic orchestral band Hjaltalín, which played festivals worldwide. Kira has produced over 50 short documentaries about China’s underground music scene for the Beijing-based record label Modern Sky, and is producing a documentary series for the British Council on the creative scenes in China’s 2nd and 3rd tier cities. She produced Jessica Kingdon’s award-winning short documentary Commodity City, and splits her time between China and the US.

Stephen Maing (moderator) is an Emmy-award winning filmmaker based in Brooklyn, New York. His recent documentary Crime + Punishment, is a highly cinematic look at police corruption and criminal justice dysfunction through unprecedented access to a group of minority whistleblower cops. Crime + Punishment was shortlisted for a 2019 Academy Award for Best Documentary, received a Special Jury Award at the Sundance Film Festival, and an Emmy Award for Outstanding Social Issue Film. Stephen’s previous feature, High Tech, Low Life, chronicled the gripping story of China's first citizen-journalists fighting a new era of state-monitored censorship and received a Grierson Award among many others. His short, The Surrender (Field of Vision), produced with Academy Award winner Laura Poitras, documented the destruction of a talented State Department analyst under the Espionage Act. It received a 2016 World Press Photo Award for Best Documentary and was nominated for a 2016 Emmy Award for Outstanding Short Documentary. Stephen is a Sundance Institute Fellow, a John Jay/Harry Frank Guggenheim Reporting Fellow and recipient of the IDA's prestigious Courage Under Fire Award. He is a member of the Academy of Motion Picture Arts and Science and a frequent visiting artist and lecturer of filmmaking and cinematography.

For those located in the United States, Ascension is currently available to stream on Paramount Plus. Visit AscensionDocumentary.com for further information on upcoming in-person and online screenings.

For those in other regions, you can search for the film via Google or another search engine to check the film’s local availability.

This program is made possible by MTV Documentary Films.