Asia Society at the Movies: Ascension 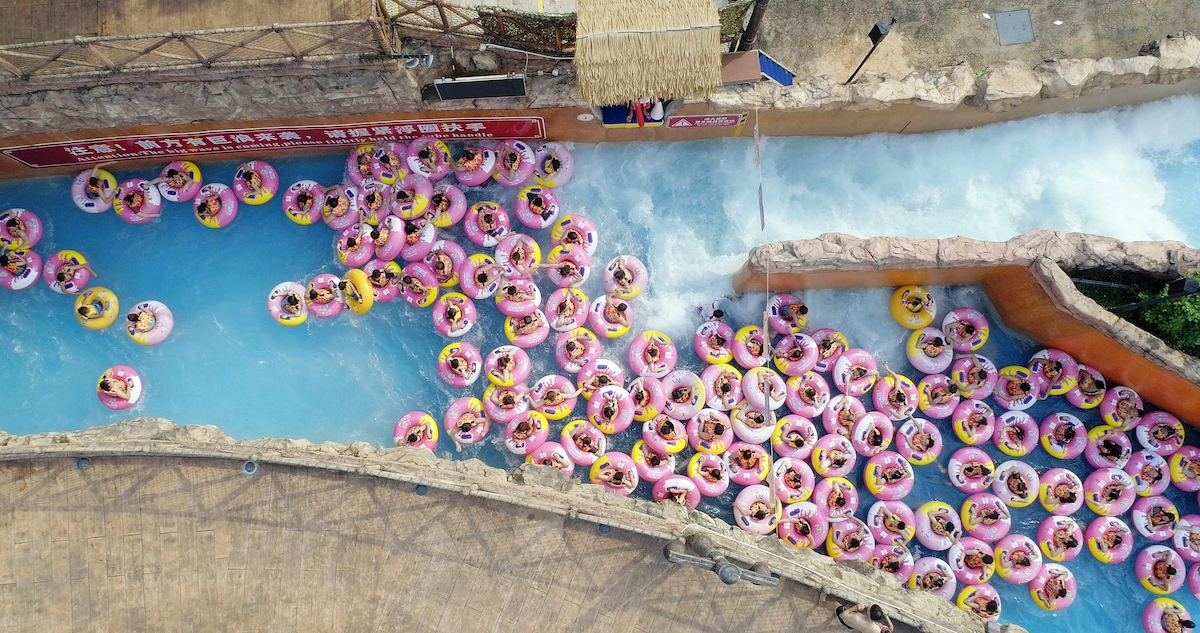 The lazy river at the Chimelong Waterpark in Guangzhou, China, as seen in 'Ascension,' directed by Jessica Kingdon. Image courtesy of MTV Documentary Films.

On January 24 at 8 p.m. New York time (January 25 at 9 a.m. Hong Kong time), join a free conversation about Ascension with the filmmakers. Register below or watch live via YouTube or Facebook.

Register for the Conversation

Since Asia Society’s successful in-person screenings of Ascension in New York and Los Angeles in December 2021, the accolades for director Jessica Kingdon’s documentary continue to grow. The critically-acclaimed film about China’s class divide is now shortlisted as one of 15 films in the Documentary Feature category for the 94th Academy Awards.

In response to popular demand, Asia Society at the Movies is excited to present Ascension once again with a special weekend-long virtual screening available to our global network. With its growing popularity in the United States, how is the film being received in Asia? Get a fresh perspective on the film with a live post-screening Q&A, hosted with the Asia Society Hong Kong Center, that explores the film’s reception in Asia, new insider insights, and more. Asia Society Hong Kong Center Executive Director S. Alice Mong moderates the conversation with director Jessica Kingdon and producers Maggie Li and Kira Simon-Kennedy.

Mesmerizing in its imagery and shot over four years in 51 locations across the country, Ascension is a cinematic exploration of China’s industrial supply chain that reveals the country’s growing class divide through staggering observations of labor, consumerism, and wealth. The film ascends through the levels of the capitalist structure: workers working on the factory floor, the middle class selling to aspirational consumers, and the elites reveling in a new level of privileged hedonism. In traveling up the rungs of China’s social ladder, we see how each level supports and makes possible the next while recognizing that the contemporary “Chinese Dream” remains an elusive fantasy for most. Moments of dignity and humanity serve as counterweight to the dizzying excess of production and consumption.  At this year’s Tribeca Film Festival, director Jessica Kingdon won the Albert Maysles Award for Best New Documentary Director and Ascension was named Best Documentary Feature.

Jessica Kingdon is a Chinese-American director/producer who is based in New York. She was named one of “25 New Faces of Independent Film” by Filmmaker Magazine and selected for the 2020 DOC NYC “40 Under 40” list. Her award-winning short Commodity City (2017) is an observational documentary about the world’s largest wholesale mall in Yiwu, China. It was shortlisted for a Cinema Eye Honor and has played at over 50 film festivals including Rotterdam, True/False, and Sheffield. She co-directed the short It’s Coming! (2020), which was supported by Rooftop Films, and is currently playing festivals, and Routine Island (2019), which is included in The Eyeslicer Season 2. Jessica’s producer credits include Tania Cypriano’s Born to Be (NYFF 2019), Ian Bell’s 808: How We Respond (Sheffield 2019), Nathan Truesdell’s The Water Slide (True/False 2018), and Johnny Ma’s Old Stone (Berlinale 2016). She is a member of the Brooklyn Filmmakers Collective.

Maggie Li, co-producer of Ascension, is a Shanghai-based producer, simultaneous interpreter (EN-CN), and business magazine editor (Value Index China). Her production work in documentary includes Plastic Watch by the BBC, China Exceptional Changes by PBS, Basketball Love by NBA China, the Power of Conversation for the UN’s 75th anniversary, and more. She has also helped to produce company videos for corporate clients such as Deloitte, Bain&Co, Colliers, and JP Morgan.

Kira Simon-Kennedy is the co-founder and co-director of China Residencies, a multifaceted arts nonprofit that has supported over 100 different international creative exchanges between China and the rest of the world since its inception in 2013. She has been a fellow at NEW INC, the New Museum’s incubator for art, design and technology, as well as the IFP Made in NY Media Center, creating Rivet, a platform to connect creative people with opportunities worldwide. Kira has produced over 50 short documentaries about China’s underground music scene for the Beijing-based record label Modern Sky, as well as a documentary series for the British Council on the creative scenes in China’s smaller cities. She produced Jessica Kingdon’s award-winning short documentary Commodity City, and is currently producing two other feature documentaries directed by Shelley Cheung Claudron and Jiayu Yang, as well as several documentary shorts.

S. Alice Mong (moderator) became the executive director of Asia Society Hong Kong Center (ASHK) in August of 2012. Prior to ASHK, she worked in New York for almost a decade in senior management positions in the non-profit sector. She served as a consultant to ASHK in preparation for the February 2012 opening at its new home in Admiralty at the former British explosives magazine. While in New York, Mong was the director of the Museum of Chinese in America (MOCA) from 2009 until 2011, overseeing the entire expansion project of the 30-year-old organization. Mong stepped down as the director of MOCA in July 2011 after successfully transforming the museum from a New York Chinatown institution to a leading national museum. Mong also served as the executive director for the Committee of 100 in the United States, a Chinese-American non-profit membership organization founded by architect I.M. Pei and cellist Yo-Yo Ma. Mong is a graduate of the Ohio State University and serves as a member of the board of directors of The Ohio State University Alumni Association. She received her EMBA from Kellogg and Hong Kong University of Science and Technology.

Outside of the above viewing window, Ascension is currently available to stream on Paramount Plus. Visit AscensionDocumentary.com for further information on in-person and online screenings or search for the film via Google or another search engine to check the film’s local availability.

This program is made possible by MTV Documentary Films.

About Asia Society Hong Kong Center
As an affiliate of the Asia Society global network, Asia Society Hong Kong Center was established in 1990 by a group of Hong Kong community leaders, led by the late Sir Q.W. Lee, honorary chairman of Hang Seng Bank. In February 2012, the Hong Kong Center established its new home in Admiralty at the former Explosives Magazine of the old Victoria Barracks. Steeped in history, cultural significance and natural beauty, the 1.3 hectares site, which houses a group of four former British military buildings, was originally built by the British Army in the mid-19th century for explosives and ammunition production and storage. Through careful conservation, restoration and adaptive re-use, this heritage site was successfully transformed into a cultural, artistic, and intellectual hub in Hong Kong in 2012 and offers a broad variety of programs in the form of lectures, performances, film screenings and exhibitions to the community.