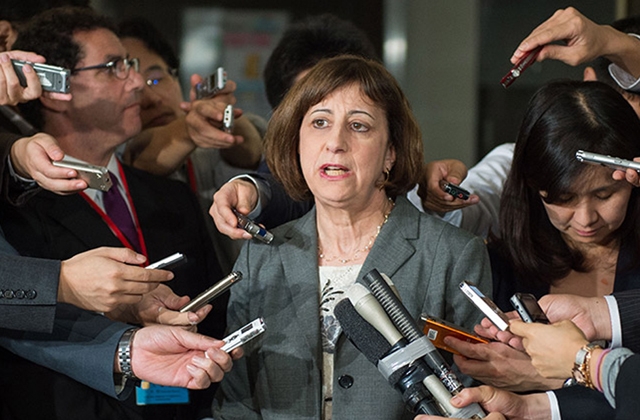 NEW YORK, October 9, 2015 — Asia Society announced today the appointment of Wendy Cutler as head of its Washington, D.C., office and Vice President of the Asia Society Policy Institute (ASPI), a think tank that aims to bring Asia to the forefront of global policy making.

Ms. Cutler joins Asia Society following a long and illustrious career as a diplomat and negotiator in the Office of the U.S. Trade Representative (USTR). ‎Most recently she served as Acting Deputy U.S. Trade Representative; in that capacity she was responsible for the just-concluded Trans-Pacific Partnership (TPP) agreement, including the bilateral negotiations with Japan. Cutler’s nearly three-decade tenure at USTR focused primarily on strengthening trade ties with Asian partners and recognizing that strong economic relations contribute to peace and prosperity in the region. Her accomplishments — beyond the TPP — have included successfully negotiating the U.S.-Korea Free Trade Agreement, updating the U.S.-China Joint Commission on Commerce and Trade (JCCT), and rendering the trade agenda of APEC more relevant and robust.

“We are delighted and proud to welcome Wendy Cutler to the Policy Institute,” said ASPI President and former Prime Minister of Australia Kevin Rudd. “You will not find many diplomats with a better understanding of global trade and the economic issues so integral to the health of the global economy. She’s known in the Asia-Pacific region as a problem solver, willing to listen closely to the views of her colleagues as she works to develop win-win outcomes."

“Wendy Cutler is a powerhouse,” said Asia Society President and CEO Josette Sheeran. “I had the privilege of working closely with Wendy during my years at USTR. She is one of the most respected trade negotiators in the world. She will bring enormous depth, experience, and energy to the Asia Society, particularly to our presence in Washington. The one-two punch of Kevin Rudd and Wendy Cutler raises our Policy Institute to a very high level, providing great benefit to our members and global network.”

“Asia is like a second home to me,” Cutler said. “Trade negotiations have taken me to nearly every corner of Asia. From these travels and personal interactions, I have gained a deep respect for my Asian colleagues as they open and reform their economies. I look forward to contributing to this work in my new role at the Asia Society Policy Institute.”

In her new position, Cutler will have a broad mandate to engage policy makers and diplomats in the United States and Asia in the Policy Institute’s activities. She will direct Asia Society’s Washington, D.C. office. Cutler will also develop and lead new policy initiatives, particularly those related to international trade policy and governance, and enhancing the role of women in Asia’s economic and social development.

“Women in the region offer the key to future economic vitality,” she said. “I hope to contribute to integrating women more fully into the Asian workforce through my work at ASPI.”