Wendy Cutler: Asia's Rise Closely Tied to the Rise of its Women 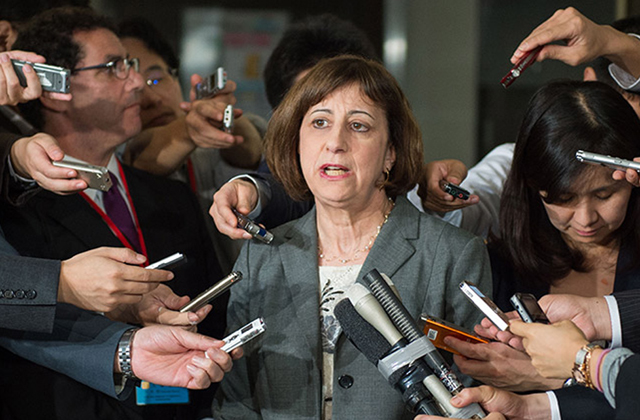 On Tuesday, October 20, at 10 am, the Asia Society Policy Institute will present an AsiaConnect teleconference with Wendy Cutler on economic relations between the U.S. and Asia, including the recently-completed Trans-Pacific Partnership agreement, and on her decision to join ASPI. The call will be held off the record. To register by email, click here.

This week, the United States and 11 other nations announced that they had agreed the Trans-Pacific Partnership, a broad trade pact that will cover around 40 percent of the world's economy. One of the agreement's chief negotiators was Wendy Cutler, the acting Deputy U.S. Trade Representative. On Friday, Asia Society announced that Cutler will be appointed as the Vice President of the Asia Society Policy Institute, a think tank that aims to bring Asia to the forefront of global policy making. Cutler — who will head Asia Society's Washington, D.C., office — officially joins the organization on November 2, 2015.

Cutler spoke with Asia Blog about the passage of TPP, why she joined ASPI, and what she hopes to accomplish there.

Having just wrapped up negotiations for the Trans-Pacific Partnership, you undoubtedly had many options for what to do next. What appealed to you about joining the Asia Society Policy Institute?

First, Asia is the region of the world that feels like home to me, one full of interesting people and dynamic economies, and I wanted my next career move to focus on this important part of the world. Secondly, the problem solving and practical approach of ASPI is especially attractive to me. Throughout my career I’ve really come to appreciate the Asian perspective on issues that I’ve worked on, and I think at times that Americans don’t always really appreciate that perspective. I look forward to serving as a bridge between these different perspectives, while helping to address some key problems facing the region.

I’ve also had the honor of working with [Asia Society President and CEO] Josette [Sheeran] for a number of years when she worked at USTR and the State Department — and the opportunity to work with her again, as well as [Asia Society Policy Institute President] Kevin Rudd, a person whom I've admired from afar for many years, was very appealing.

What are some of the particular issues you’d like to tackle at ASPI? What do you think will define your time here?

This is something that will develop over time, but for now my thoughts are focused in two areas. First is in trade, an area in which I believe I can bring a great deal of expertise and experience to ASPI. I’m looking forward to seeing how TPP will affect the region, how additional countries can be brought into the agreement, and more generally how we can promote deeper economic integration into the region over time.

During my career I’ve also noticed how underrepresented women are in many Asian delegations. Recently, I've seen more younger women entering the workforce in Asia, partly due to demographic reasons and partly to the recognition that women are key to economic prosperity in these regions. But much more progress needs to be made in terms of integrating them more fully into the workforce at all levels, including senior level positions. At ASPI, I hope that I can make a strong contribution in this regard.

TPP has attracted a fair amount of criticism with both liberals and conservatives. What are the main benefits of TPP? How will it improve the economy and the US position in the world?

TPP will bring enormous economic and strategic benefits to the United States. Some of these benefits focus on enhancing market access, eliminating tariffs and non-tariff barriers in TPP countries, leading to more U.S. exports and high-paying jobs in the country. TPP also promotes U.S. values in Asia, including those related to labor, the environment, and open access to the Internet. The accord will also create trade rules for emerging areas like state-owned enterprises, where these rules have not been set.

The strategic benefits, too, are innumerable. TPP is a demonstration that the U.S. is committed to engagement in the economic sphere in Asia and to strengthening ties that will contribute to peace and stability in the region.