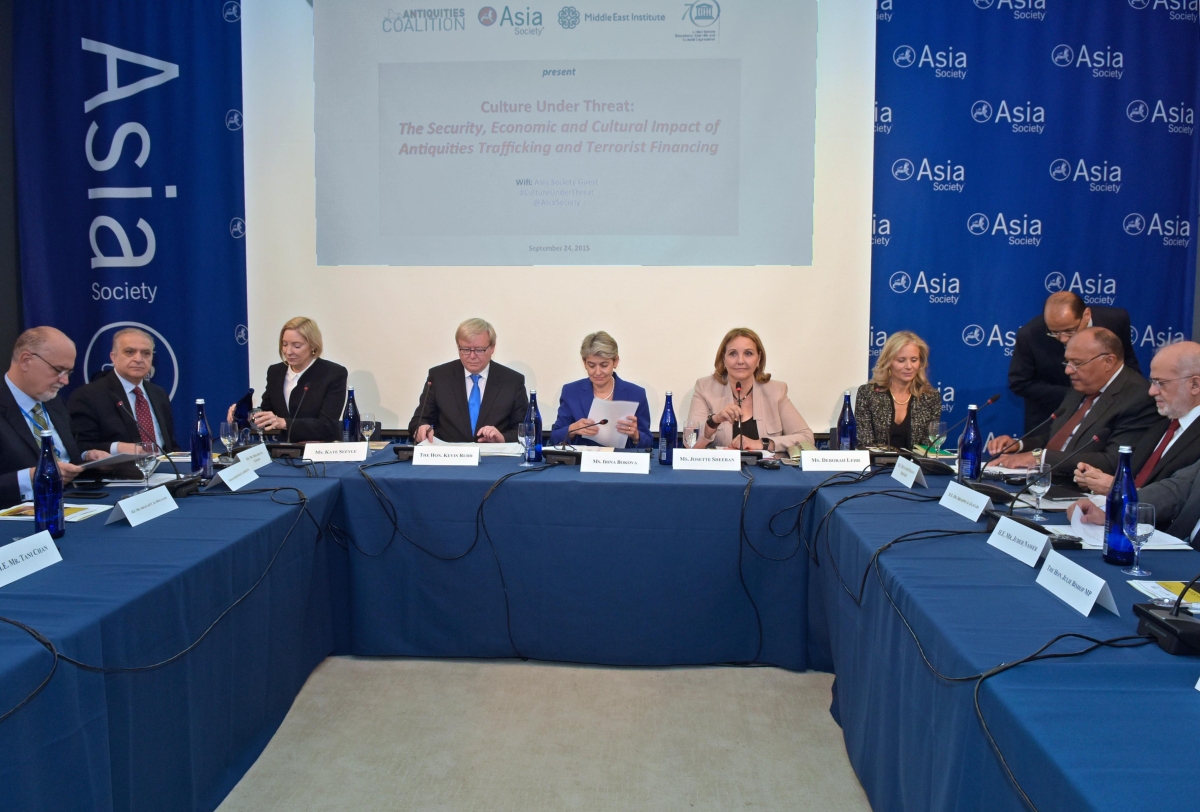 "Call to Action" for international community to end trade in conflict antiquities, shut down key source of terrorist financing.

NEW YORK, September 25, 2015 — At the Culture Under Threat forum held at the Asia Society headquarters in New York, Foreign Ministers and senior government officials from around the world joined leaders of arts institutions, archaeological associations, and experts in terrorism to stop the looting and trafficking of antiquities, and halt a major source of funding for terrorism.

Foreign Ministers of Egypt, Iraq, Jordan and Australia, as well as ambassadors and senior officials from Cambodia, Thailand, Italy, Qatar, and Saudi Arabia joined diverse experts in an unprecedented high-level, multi-sector forum to seek solutions to this black-market trade in “blood antiquities,” which has reached crisis proportions in the Middle East. The group of government, private-sector and NGO representatives, each with distinct roles to play in stemming the illicit trade, was convened by the Asia Society, the Antiquities Coalition, UNESCO, and the Middle East Institute.

“We have to deal with this crisis by uniting,” said Jordan’s Deputy Prime Minister and Foreign Minister Nasser Judeh. “We have to go beyond alarm, shock, and condemnation. The time has come for us to unite towards a more proactive approach and translate words into deeds before it is too late.”

Jordan is coordinating an initiative with Italy to build support for United Nations action to halt the trade in conflict antiquities.

Egyptian Foreign Minister Sameh Shoukry, who has played a leading role in this fight, told the gathering that, “terrorists use the destruction of cultural heritage as a tactic of war to terrify populations, to finance terrorist activities, and to spread hatred.” He added, “the responsibility to confront these terrorist criminal acts lies with the international community, including governments, international and regional organizations, museums, the art market, archeologists, media, and all others who are interested in preserving this heritage for humanity.”

Iraqi Foreign Minister Ibrahim al-Jaafari put it bluntly: "I believe that terrorism is seeking to destroy history,” he said, “and seeking to abolish our future."

The host organizations issued a “Call to Action” for the international community to join forces in a strategic effort to halt the trade in conflict antiquities and, in doing so, cut off potential sources of terrorist revenue.

“We are witnessing not only the murder of people, but the murder of culture,” said Asia Society Policy Institute President and former Prime Minister of Australia, Kevin Rudd. “We must act together, now.”

The coordinated appeal calls for:

• The United Nations to formulate action plans to address “cultural cleansing”
• The International Criminal Court to launch a war crimes investigation against those entities that engage in “cultural cleansing”
• The international community, to support states in protecting, preserving, and documenting items of cultural heritage endangered by armed conflicts
• A global campaign to raise awareness about the purchase of conflict antiquities and terrorist financing
• All governments to take steps to prevent the trade in conflict antiquities
• All actors involved in the cultural property trade to be vigilant when obtaining antiquities from countries in conflict

The participants discussed a range of potential solutions to the crisis, including possible “boots on the ground” to provide site protection; a tightening of national and international laws against looting and trafficking; establishing a moratorium on the trade in conflict antiquities; a so-called “asylum for heritage” plan to safeguard treasures in parts of Syria and Iraq; the creation of national inventories – and, longer-term, a “digital archive” of cultural treasures for the Middle East; and the creation of organizations such as “Archaeologists without Borders” to support countries in crisis with additional resources.

“The presence of such a distinguished group of international experts demonstrates the necessary political will exists to address this crisis,” said Deborah Lehr, chair and cofounder of the Antiquities Coalition and co-chair of the forum. “Our intent is to unite our efforts and seek meaningful, practical solutions that will bring a halt to the trade in conflict antiquities and cut off funding for extremist organizations.”

Josette Sheeran, the Asia Society President and event co-chair, speaking of what she called the trade in “blood antiquities,” added: “These sites are for no one person or group to take, to remove, to destroy, to pillage, to steal, or to covet for themselves, or to use as fuel for death, or terror or destruction.”

The “Culture Under Threat” forum builds on the May 2015 Cairo Declaration, signed by Ministers from ten Middle East and North African countries, that outlined a regional strategy to combat the trafficking of looted antiquities and its links to terrorist financing.

“In tragedy there is opportunity,” added Middle East Institute Senior Vice President Kate Seelye. “This issue allows and even compels east and west to work together to fight for our shared humanity,”

At the start of the session, Director General Bokova, led a moment of silence to remember Khalid al-Asaad, the Syrian archaeologist beheaded by the Islamic State. Bokova noted that “culture today is on the front line of conflict, and it also should be at the heart of all the security, humanitarian and peace building measures.”

For more about this unprecedented forum, see the Asia Society blog HERE.