Can the World Save Antiquities Under Terrorist Threat? | Asia Society Skip to main content

Can the World Save Antiquities Under Terrorist Threat? 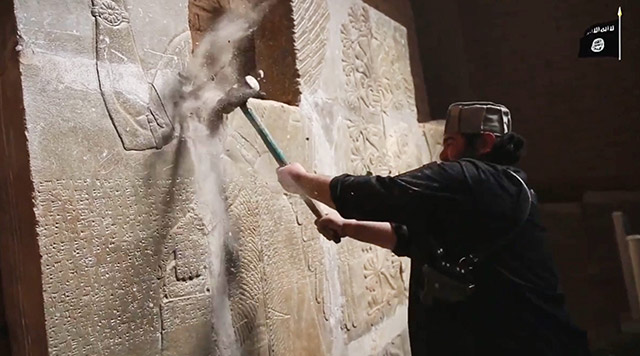 An Islamic State militant participates in the destruction of ancient ruins near the city of Nimrud, Iraq, in a video released by the Islamic State.

Last month, the jihadist extremist group the Islamic State (known locally as “Daesh”) ransacked the ancient city of Palmyra in Syria, looting museums and demolishing millennia-old structures such as the 2,000-year-old Temple of Bel. As militants searched for artifacts, they captured the 82-year-old renowned antiquities scholar Khaled al-Asaad and demanded he lead them to more treasures. Even under torture, al-Asaad refused. For his defiance, he was ultimately beheaded.

“Here we had a scholar, a humanitarian, a person who dedicated his life to the preservation of our common heritage,” said Asia Society Policy Institute President Kevin Rudd, speaking at Culture Under Threat, an event held Thursday morning at Asia Society in New York. “And then in this moment where he became vulnerable in the hands of those who are definitionally evil, he was slaughtered. He has truly become a martyr for our common cultural heritage, and he lives as an inspiration to us all. I think if he were here, he would call us to arms about what we do next.”

Since the Arab Spring of 2011 and subsequent rise of terror groups like ISIS, countries throughout the Middle East have experienced rapidly multiplying instances of cultural destruction and antiquities trafficking, the latter in order to finance terrorism. Egypt alone has seen between a 500 and 1,000 percent increase in looting at major archeological sites and $3 billion in losses to cultural racketeering, according to the Antiquities Coalition. Rudd joined a gathering of high-level foreign ministers, such as Ibrahim Al-Jaafari, Iraq's Minister of Foreign Affairs, Nasser Judeh, Jordan's Deputy Prime Minister and Minister of Foreign Affairs, and Sameh Hassan Shoukry, Egypt's Minister of Foreign Affairs, as well as cultural preservationists to discuss the worsening threat.

Bokova used the term “cultural cleansing,” calling the destruction of antiquities a strategy to spread hatred and deepen sectarian violence. “It is no longer only a cultural emergency, it is a security issue,” she added.

Australian Foreign Minister Julie Bishop agreed, citing the 1951 book The True Believer by American philosopher Eric Hoffer, which argued that fanatical mass movements break down existing group ties as part of their strategy to find new recruits. “There’s an established link between extremist ideologies, such as that of Daesh, and the destruction and trafficking of antiquities,” Bishop said. “Destroying a group’s heritage and history weakens traditional communal bonds, leaving individuals ‘orphaned and empty in a cold world,’ which makes them ideal potential converts for a movement like Daesh ... Hence, Daesh ransacks and destroys ancient sculptures and artifacts and burns priceless manuscripts that tie the people of the Middle East to their real and extraordinary histories.”

Inigo Lambertini, Italian deputy permanent representative to the United Nations, agreed with attendees pointing out the threat terror groups see in shared cultural heritage. “Terrorists are intimidated by history,” he said. “But they’re also very interested in money. Basically what’s happening in Palmyra is not only the destruction of cultural heritage, but also a boom in illicit trafficking of historic artifacts.”

This “cultural racketeering” of historical artifacts, many of which can fetch millions of dollars on the international black market, is a major source of funding supporting groups like Daesh. According to the Antiquities Coalition, just $1 million can be enough to supply the group with more than 11,000 AK-47 machine guns or 1,250 rocket launchers.

In the second half of Thursday’s event, a wide-ranging panel discussion moderated by Asia Society President Josette Sheeran and Antiquities Coalition Chairman Deborah Lehr featured extensive remarks from U.S. Col. Matthew Bogdanos, whose work protecting the Iraqi National Museum formed the basis of his book Thieves of Baghdad.  Bogdanos argued that the financial incentives to looting are more powerful than the international community realizes — and that existing methods of prevention are largely ineffective.

"Going back to 2005, when al Qaeda was trafficking in antiquities, it was second only to kidnappings and ransom [as a source of funding]," he said. "ISIS is making tens of millions, and that I am telling you that this is a low figure that is not exaggerated." Bogdanos also discussed the inherent difficulties of halting antiquities trading, and warned against relying on Western military aid as a solution. "Boots on the ground is not a cure all," he said. "It has to be part of an overall strategy."

Vishakha Desai, President Emeritus of Asia Society, remarked that the panel isn't new. In 2001, the Taliban destruction of giant Buddha sculptures in Bamiyan, Afghanistan, stirred international outrage — but no mechanisms were put in place to prevent it from happening again.

"I am reminded of the last time [Asia Society] did [an event] like this, which was called Beyond Bamiyan: Will the World Be Ready Next Time? " she said. "And it's sad, because we have to recognize that the world wasn't ready next time." Noting that valuable objects are often located in areas controlled by "lawless non-state actors," Desai added that "we have to think about what happens when the objects are confiscated, and in fact we might not be able to send objects back to countries who are in the middle of a huge, horrendous war. So we might want to think about whether there's a way to create a way station, an interim museum, where the objects come together."

Ricardo J. Elia, an archaeologist at Boston University, endorsed a moratorium on purchasing items from regions at risk of terrorist activity, saying that "looting is a function of a system that runs on supply and demand. Maybe we can work on the demand side."

"Would it not be possible for museum associations, dealer associations, auction houses, and private collections to say 'Look: this is a horrific crisis. Let's just stop buying things and acquiring things,'" he said. "Would a moratorium not perhaps diminish the demand? And, if, say, another country didn't want to go along, then we'd at least have the satisfaction of knowing we tried to do the right thing."

Matt Schiavenza contributed to this story.

UNESCO Director General Irina Bokova speaks about solutions for cultural racketeering and the importance of outreach to the public, particularly to young people.