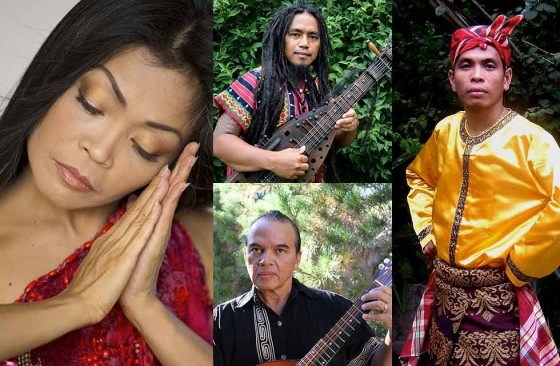 NEW YORK, October 26, 2015 — Asia Society presents Grace Nono, one of the Philippines’ most renowned female vocalists, on October 30. Joined by Charles Wandag, Bo Razon, and Faisal Monal, Grace will give voice to Philippine oral traditional chants with sacred themes that were taught to them directly by elders from Luzon, Visayas and Mindanao. They will perform these chants at a time when these are not taught in schools, or heard over the radio and television, or cultivated actively by most communities, many of them burdened by serious threats to their ancestral domains, militarization, mining and environmental destruction.

In Voicing the Ancestral Sacred, Grace reclaims and revitalizes oral and aural traditional performances of the precolonial Philippines. For her and the ensemble, singing these chants is their contribution to the collective prayer for peace and the survival of the indigenous lands and peoples of the Philippines.

This trans-tribal concert will include the laud (a long-necked guitar); skin drums; gangsa or Cordillera brass gongs; tongatong or stamping tubes; and kulintang or row of small, horizontally laid gongs.

The Philippine islands—home to hundreds of ethnolinguistic groups and subgroups with cultural links to other Southeast Asian peoples—have ancestral sonic landscapes that emanate from the continual acts of relations, exchange, conflict, negotiation, and celebration, between humans, ancestral spirits, earth deities, animals, birds, winds, rivers, and other elements of creation. These sonic worlds have become increasingly muted over the last six hundred years. With the coming of new sonic economies introduced by Islam in the 14th century; Spanish Catholicism in the 16th century; and American Protestantism, rapid industrialization, and contemporary globalization in the 20th century, came the gradual receding of these ancestral sounds and voices—even in their hybrid forms—to underground spaces.

Today, a growing number of younger generation Filipinos and Filipino descendants in the Philippine diaspora are revisiting and reconfiguring fragments of these ancestral sonic landscapes. They are also reclaiming the sacredness of these sounds and voices as points of communion between spirits and humans, ancestors and offspring, and between peoples from different ancestries.

The performance is presented in conjunction with the exhibition Philippine Gold: Treasures of Forgotten Kingdoms, which runs from September 11 to January 3, 2016, at Asia Society New York. Most objects in the exhibition trace back to the Kingdom of Butuan — a still scarcely understood civilization that rose to prominence in the 10th century before mysteriously declining in the 13th. Grace hails from the area in the Southern Philippines where the Butuan kingdom was located.

Founded in 1956 by John D. Rockefeller 3rd, Asia Society is a nonpartisan, nonprofit institution with headquarters in New York.

Media Contacts:
Members of the press interested in more information about the programs, or in complimentary tickets should email pr@asiasociety.org.