Letter From Kashmir: Between the Great Divide | Asia Society Skip to main content 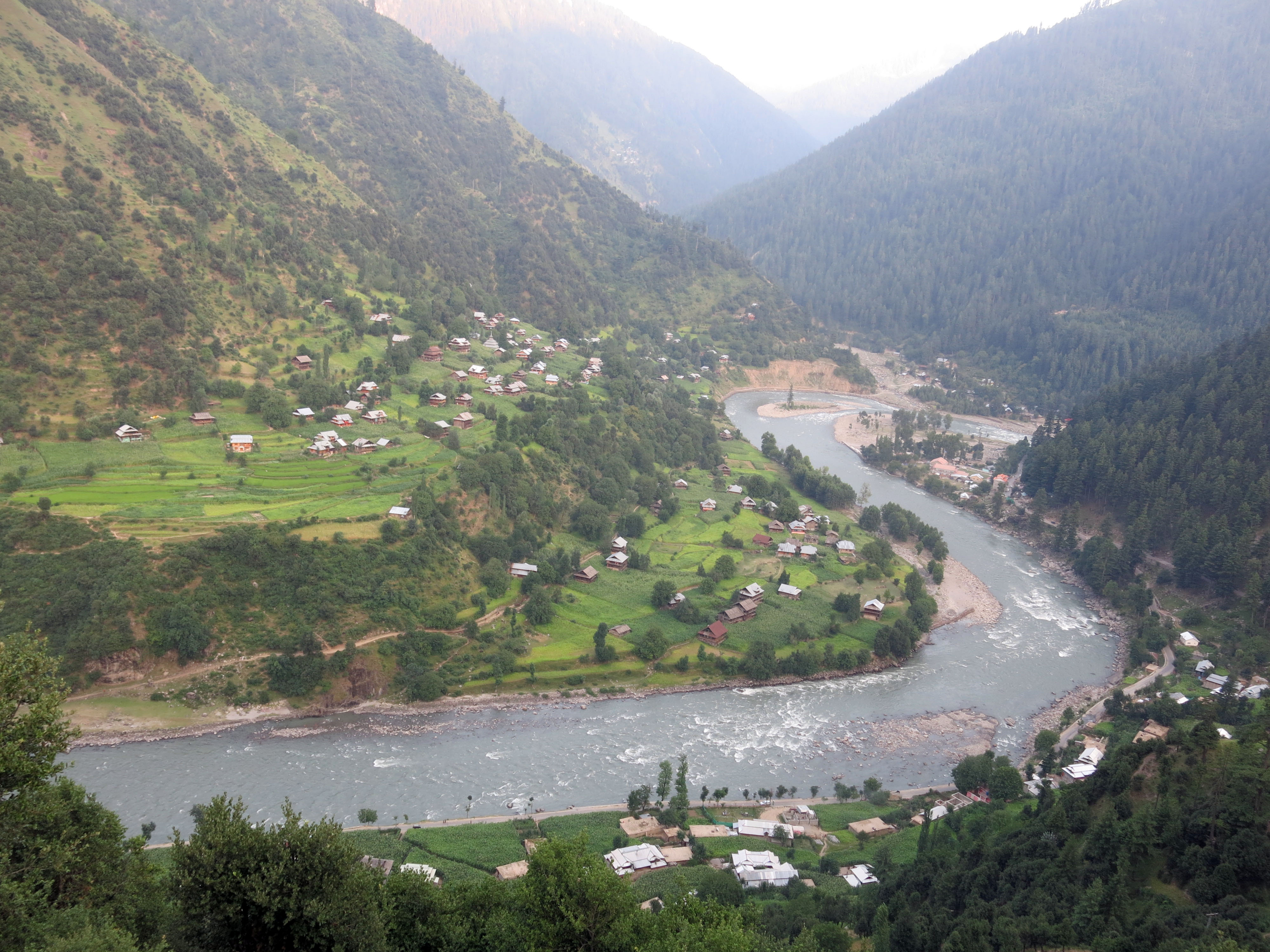 Letter From Kashmir: Between the Great Divide

For decades, the former princely state of Jammu and Kashmir has sat at the heart of the struggle between Pakistan and India. Cleaved during the 1947 partition of the two nations, the western portion of Jammu and Kashmir is an Indian state and the eastern portion is administered by Pakistan. While much has been written about the Indian side, far less is known about Azad Kashmir, as the Pakistani side is often referred to. In Between the Great Divide, Pakistani journalist and member of the Asia 21 Young Leaders iniative Anam Zakaria traveled across Azad Kashmir, exploring the untold stories of those caught in the middle of one of the world’s longest ongoing conflicts.

That great divide came into especially sharp relief in 2019, after New Delhi revoked the special status of Jammu and Kashmir — a constitutional guarantee that provided the state with a nominal level of autonomy. With political arrests, curfews, and a steep curb on communications, the region has plunged further into uncertainty, and tension between neighboring Pakistan and India has spiked once again.

In this lightly edited excerpt, Zakaria describes traveling with her husband, Haroon, and Kashmiri friend, Sharjeel, to visit Manakpayan Refugee Camp in Muzaffarabad, the capital of Azad Kashmir. Located just past the Line of Control (LoC) dividing the Indian and Pakistani sides, the camp is just one of two dozen — housing tens of thousands of refugees in total. 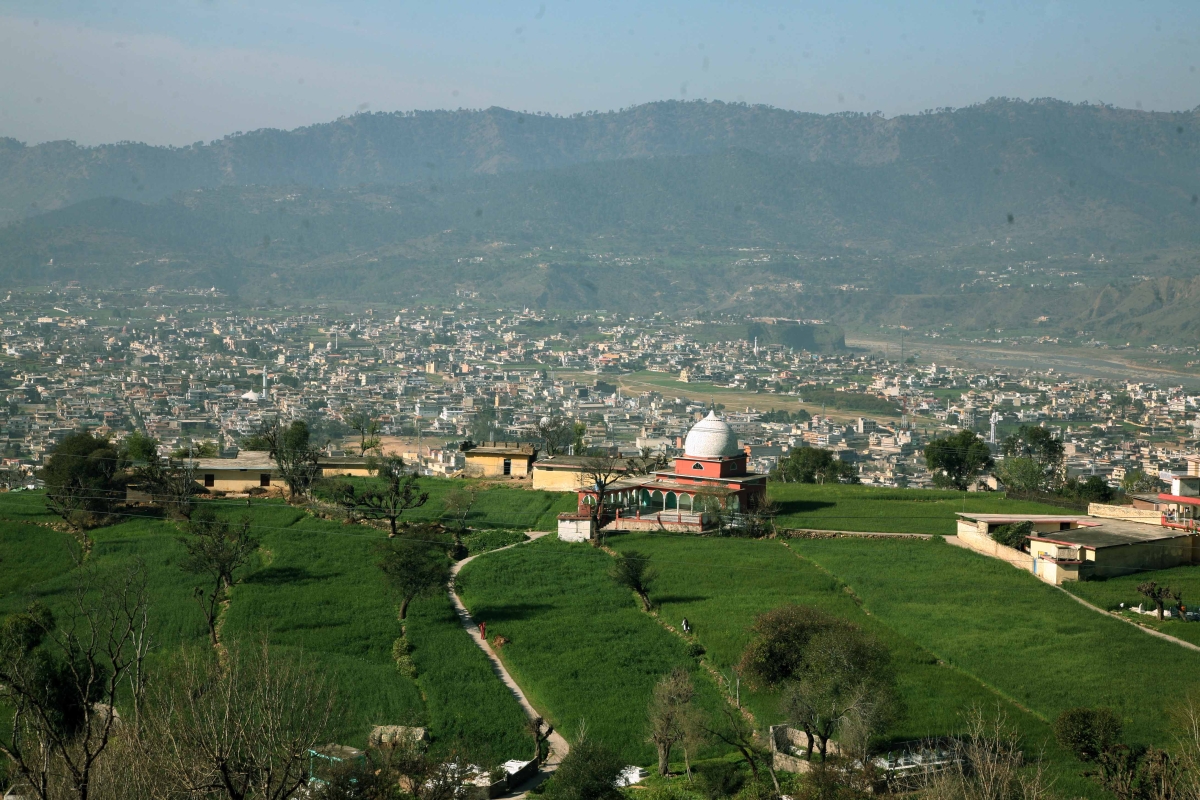 The district of Kotli faces cross-LoC firing despite a 2003 ceasefire agreement in place between India and Pakistan.

Today, thousands of refugees live in camps set up by the Pakistani government in cities like Muzaffarabad, Bagh, Kotli, and Mirpur in Azad Kashmir. They are issued Pakistani identity cards, like all other Kashmiri citizens, and are given Rs 1,500 ($9.70) per person per month by the Azad Kashmir government to survive on. (The government has since increased the allowance to Rs 2,000.) “The government also provides land for the 24 refugee camps that it operates, housing 22,773 people. The rest live in various areas and cities across AJK,” noted a report in Al Jazeera. Electricity, gas, and tuition fees are also subsidized for them. 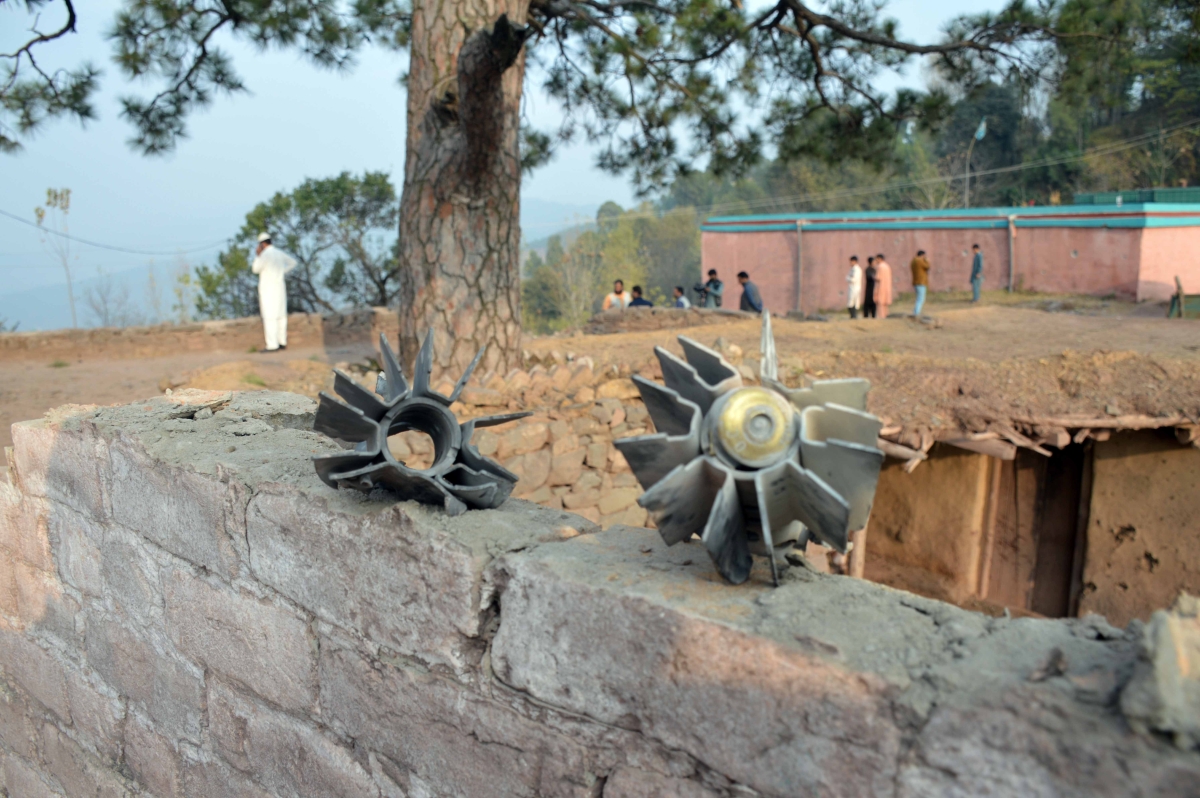 Splinters from a mortar shell in Kotli.

In some ways, the refugees are culturally and linguistically different from those who belong to Azad Kashmir. While several of the refugees also speak Pahaari and Gojari, which makes it easy to converse with the locals (many of whom speak Pahaari and Pahaari-Pothwari as well as Gojari), others only speak Koshur (commonly referred to as Kashmiri). Since Koshur is only spoken by a minority in Azad Kashmir, it can be problematic for some of the refugees to fit in. Moreover, politically too, the refugees stand out. Many of them are secular nationalists, opposing Kashmir’s unification with Pakistan. They stand for an independent Kashmir. A lot of locals, however, at least on record, state that they would like to side with Pakistan. According to Human Rights Watch, the establishment identifies and discriminates against anyone who is perceived as a nationalist, and therefore anti-Pakistan. Reportedly, refugees have been picked up for interrogations, arbitrarily arrested and beaten up because of these nationalist sentiments. The report also mentions that “though torture is not commonplace (in Azad Kashmir), it is threatened often,” and when carried out, enjoys impunity. 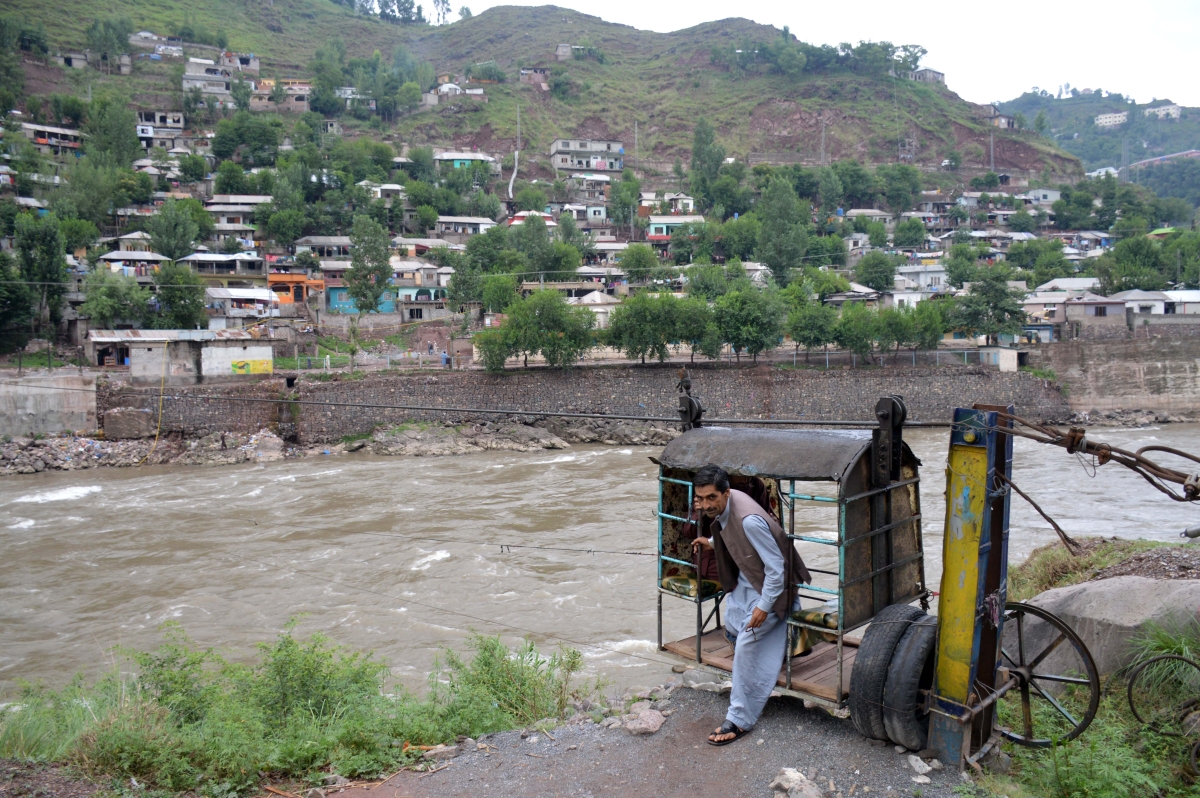 A refugee gets out of a chairlift at the Manakpayan camp in Muzaffarabad.

As we wait for the chairlift to make its way to our side, Haroon points towards our right and says, “Srinagar [the capital of the Indian side] is right in front of us. This road would take us there directly.” “Yes it would,” Sharjeel chips in. “In fact, the point at which we are standing is where the bus connects people from both sides of the LoC. Azad Kashmiris sit on the bus that goes from here to the border village of Chakothi (approximately 32 miles from Muzaffarabad). It serves as the check-post for the India-Pakistan bus service. Then they cross over by foot to Indian-administered Kashmir to meet family and relatives they have been separated from. Similarly, Kashmiris from that side walk over to Chakothi after acquiring the required permit and the bus brings them to this part of Muzaffarabad. Trade trucks between both sides also come here, right where we are standing.”

Perhaps that is what happens when one is a refugee not for a couple of months or a handful of years but for decades to come.

This bus service between Muzaffarabad and Srinagar was launched in 2005. It was seen to be an instrumental step in bridging the physical and political divide between the two sides. Yet I am told it is not easy for everyone to get on the bus. One must have a “real enough” reason to want to visit the other side. Countless forms have to be filled at one end and verified at the other.

Additional documents and proof of family across the LoC is often required. For most Kashmiris like Sharjeel, the bus remains just a dream. I am told that the refugees who came during the 1990s are also unable to use the bus service, despite the fact that almost all of them belong to divided families. Many of them have the militant label associated with them, and even those who don’t would be unable to travel across without being arrested and interrogated first to explain why they had left and whether they were associated with militancy in any way. This is the case despite a rehabilitation policy initiated by the Indian state in 2010, which encourages militants who went across the LoC for training to return to their homes in Indian-administered Kashmir.

As the chairlift arrives, I notice that it is hanging by a thin cable, the wind rocking it left and right over the flowing Jhelum. My excitement of sitting in it fizzles out. I am scared to step inside, a fear only made worse when a fourth man, a policeman from the area, joins us. He also needs to get across. Haroon enters first and I am about to follow him when Sharjeel asks us to switch sides. He explains that the wind is very strong and it is better if I sit on the right side, which is covered. The left side has no protection. He thinks Haroon will be safer there than I would. I listen to him and move over, trying not to let my apprehension show as we dangle about 20 feet above the Jhelum. I know Haroon is concerned too, for he is much more scared of heights than I am, and I begin to deliberate whether the small chairlift can carry the weight of all four of us. And as I fret, I wonder whether little children who must use the same chairlift to get out of the camp would be safe in it if four of us adults were at risk. Fortunately, the ride lasts less than a minute and before I can worry any more, we are already on the other side of the river, at the foot of the mountains that host hundreds of refugees. 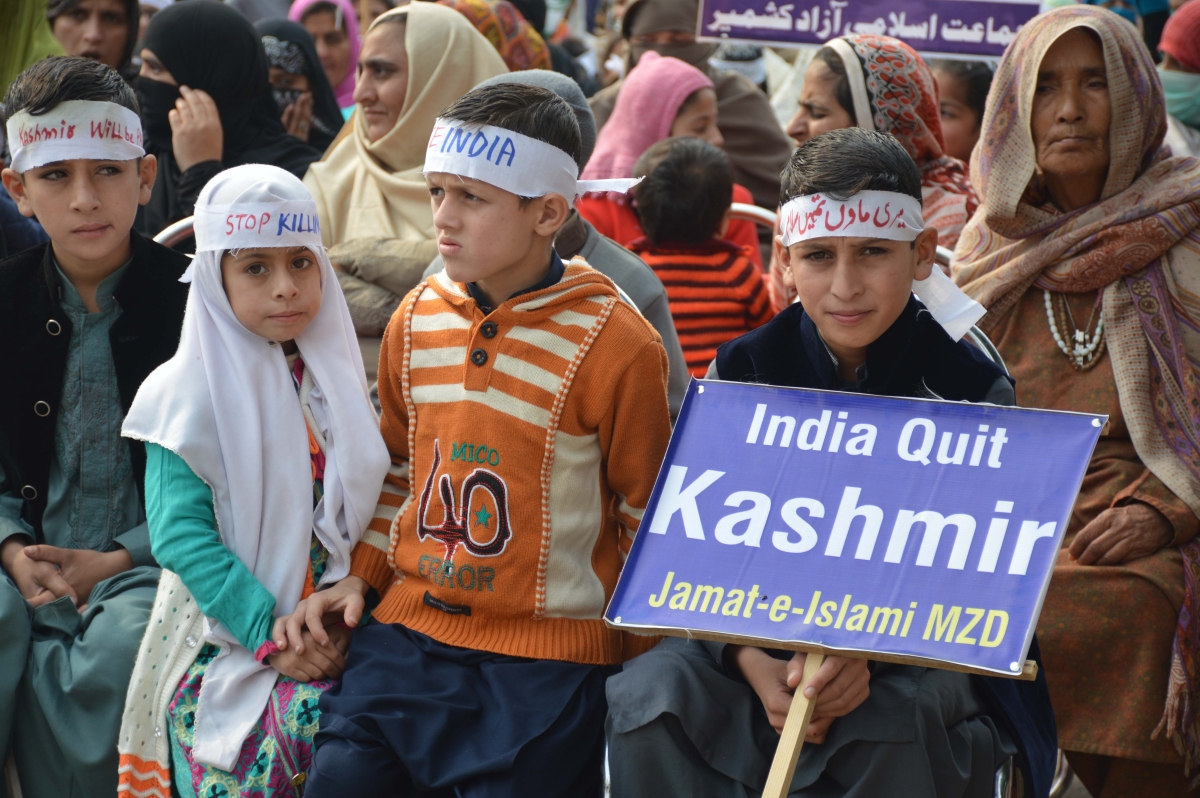 Children join a protest against the pellet wounds inflicted on Kashmiris in Indian-administered Kashmir.

Sharjeel pays 10 rupees to two young boys taking care of the chairlift. “This is the camp,” he says, pointing towards a maze of makeshift shelters, and I try to take it all in. These are mostly small shacks, some made of mud, some with corrugated iron, and others with brick. Clothes are drying on thin wires or on tree branches outside. Graffiti marks the concrete, with names like Mughal House and Arshad’s Home. Young boys stand outside, playing with sticks and stones, and pause when they see us, staring for a while before going back to their game. I have only ever seen photographs of refugee camps set up at the time of Partition in cities like Lahore, or the refugee camps set up by the United Nations High Commission for Refugees. From those snapshots, I had always imagined refugees to reside in big tents but the camp we stand at seems to resemble more of the cramped settlements the Kashmiri journalist Rahul Pandita writes about. They spread over miles of mountainous land. Perhaps that is what happens when one is a refugee not for a couple of months or a handful of years — but for decades to come.

Excerpted from Between the Great Divide by Anam Zakaria. Copyright © 2018 by HarperCollins India. All rights reserved. No part of this excerpt may be reproduced or reprinted without permission in writing from the publisher. 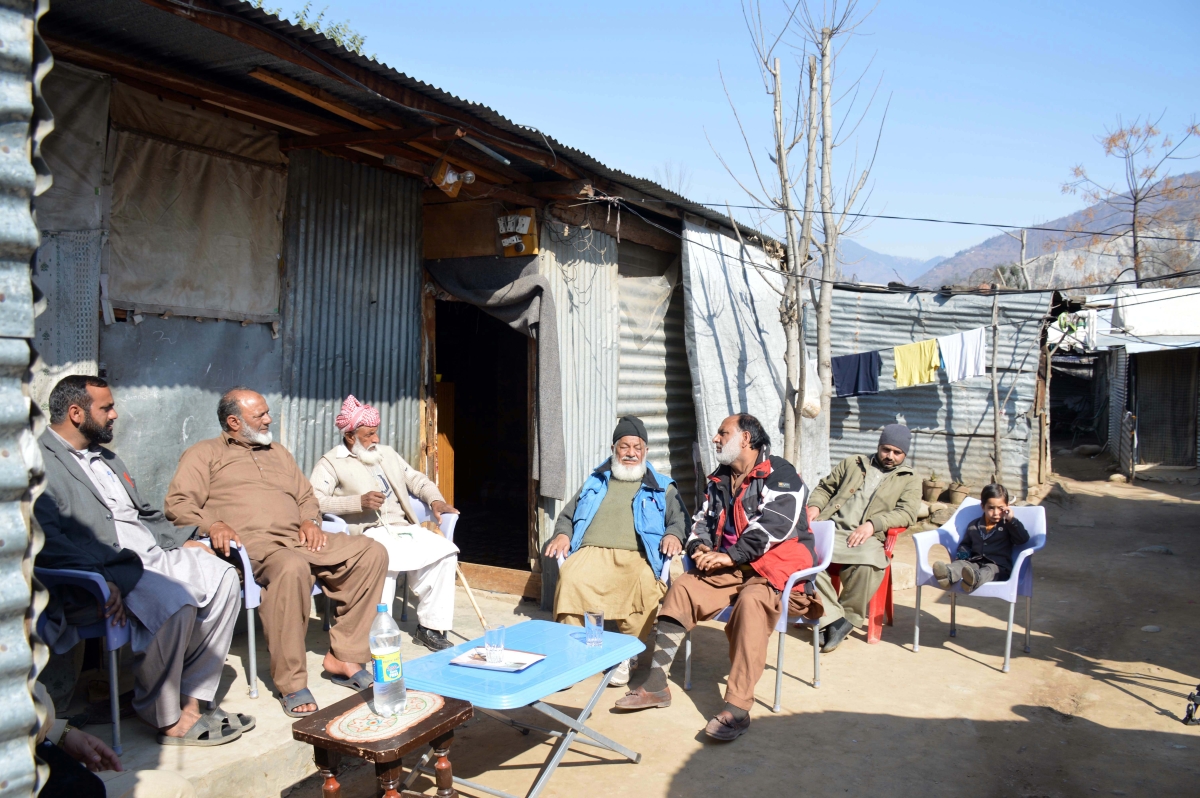 Refugees from Indian-administered Kashmir soak in the sun in makeshift camps at Muzaffarabad. 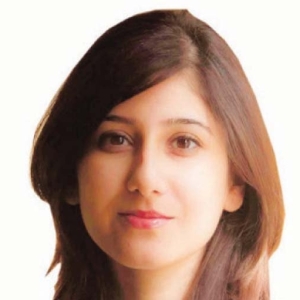 Anam Zakaria is an independent oral historian, researcher, author, and cultural facilitator. She previously led The Citizens Archive of Pakistan's (CAP) Oral History program, conducting hundreds of oral histories with Partition survivors and religious minorities. She frequently writes on issues of conflict and peace in South Asia for various news outlets and peace-building platforms. Zakaria has a degree in international development from McGill University and a certification in counseling with a special interest in trauma and healing in conflict zones. She is a member of the Asia 21 Young Leaders initiative. 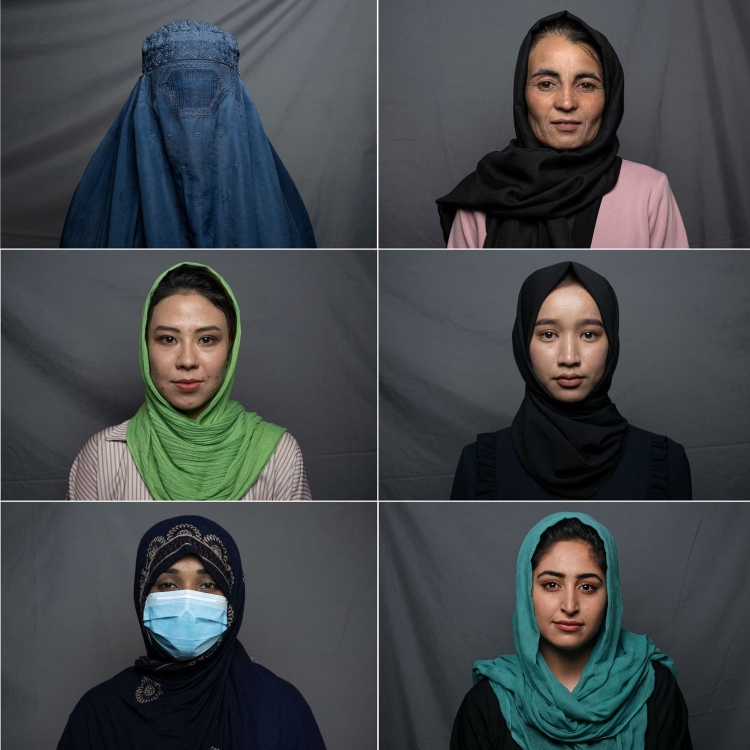 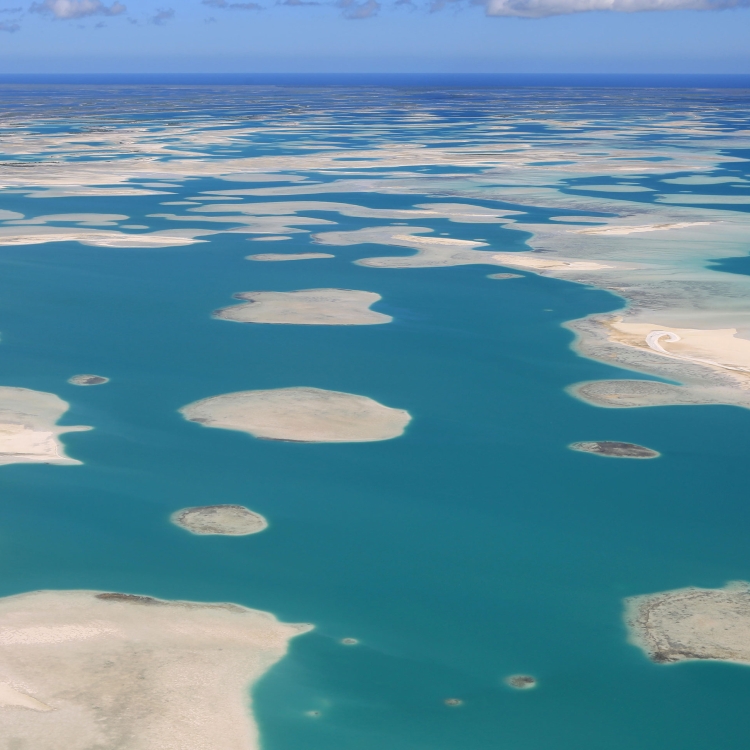 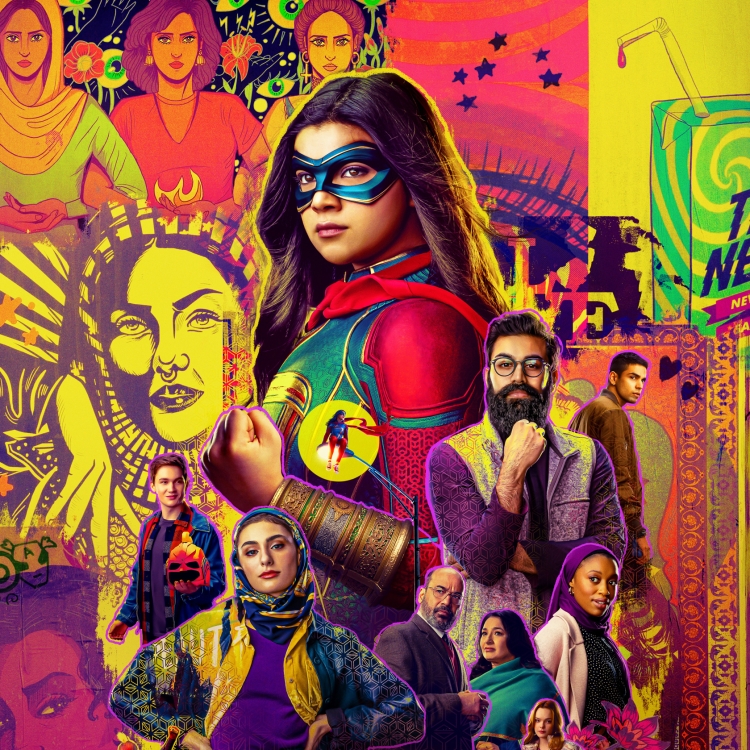