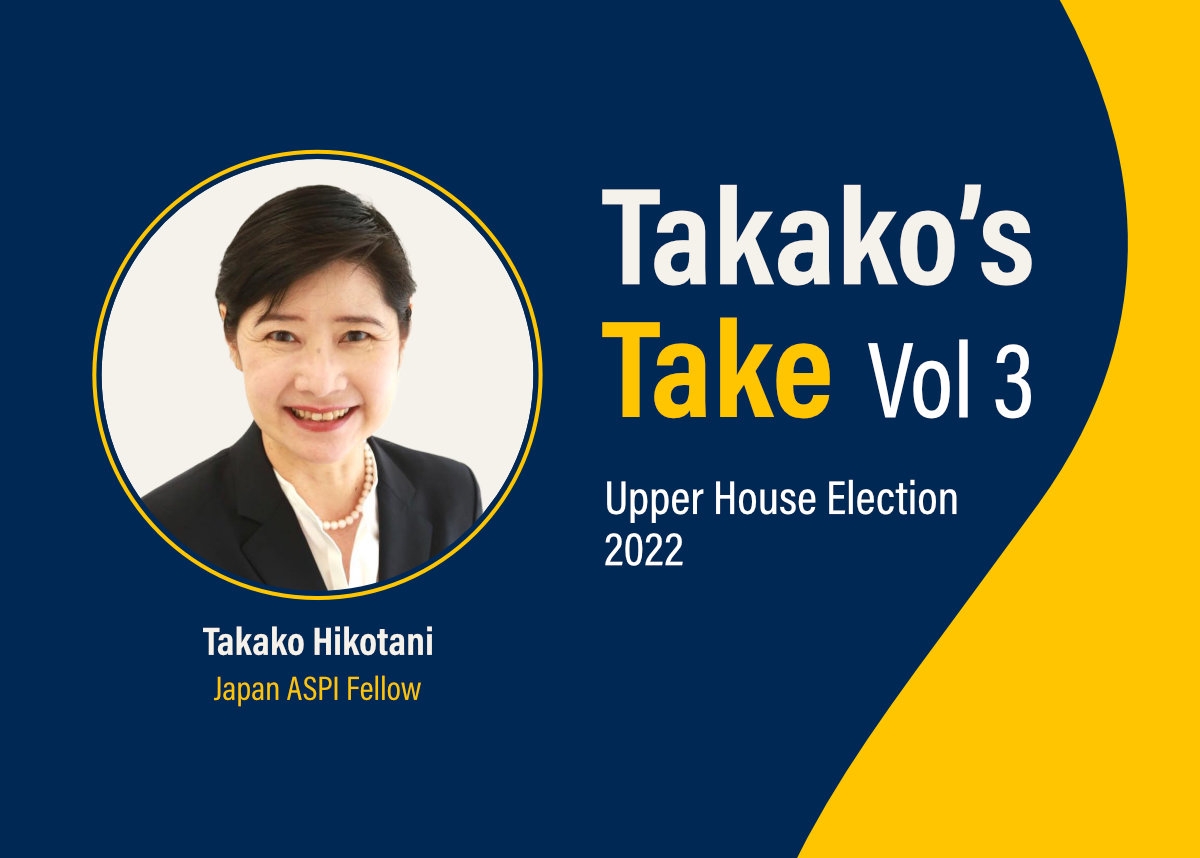 Amidst the scorching heat, another election is underway in Japan; with quirky candidate posters and loud campaign cars calling out candidates’ names. While some individual races are close and competitive, we are not expecting a surprising outcome at the national level. The Liberal Democratic Party is expected to win more than their stated goal, which is for the ruling coalition to comfortably win enough seats to maintain a majority (56 out of 125 contested seats) in the Upper House, including the seats that are not up for election this time (69 seats).

Still, there are some interesting points to look out for: let me suggest to you what they are, and why they are important.

First, let us look at the candidates. Japan is notorious for its low ratio of female members in the Diet (9.7%), ranking 147th place out of 156 countries in the World Economic Forum’s Global Gender Gap Index in 2020. This year we are witnessing a record-high percentage of women among the candidates, at 33.2%. While this is below the stated goal (35%) in the Cabinet decision in 2020 to increase women candidates in national elections, it is still notable that more than half of candidates running from the Constitutional Democratic Party are women (51%), as well the Communist Party (55.2%), with the Democratic party for the People following at 40.9%.

Would these women get elected? There is an interesting social media drive to make that happen. In the Upper House election, voters get to vote twice, once to vote for a candidate running in your prefecture and one for the proportional representation portion, where you can either vote for a party or an individual candidate. The campaign on Twitter and Instagram, led by Tae Amano, advocates using the second vote to vote for a women candidate. This will help in raising the percentage of women, regardless of what your party preference might be. Obviously, this is not a quick fix, but we can be cautiously optimistic that there is finally a growing momentum towards gender equality in the political field: let’s see what the percentage of women would be, among those we get elected.

Second, how about the voters? In the last Upper House election three years ago, only 48.8% of the electorate cast their vote, the second-lowest percentage in post-war history (The lowest was 44.52% in 1995, highest was 74.54% in 1980.). While turnout was low in all age groups, by far the lowest were those in their 20s (30.96%), followed by those who are 18-19 (32.28%). While the turnout rate was highest among those in their 60s (63.58%), followed by those over 70 (56.31%), low youth turnout and the “age gap” phenomena are not unique to Japan. In the United States, 65.5% of those over 60 voted in 2018, compared to 32.6% among those between 18 and 29. However, Japan’s gap is more significant due to the demography with fewer young people. Another problem is the distortional effects on a representative government that age-based gaps in voter turnout tend to bias public policy towards the preferences of older citizens. Early voting and extended hours at the ballot box are some measures to “bring out the youth vote,” but so far, we have seen limited effect. This is a concern, not just for the young, but overall, since turnout for the Upper House election has been mostly on the decline since 2007.

Third, is there anything interesting to look for regarding the outcome of the election? As I mentioned earlier, it is difficult to imagine that the LDP will “lose” in any way. Only half of the seats are contested, and their stated goal is modest. However, there are some interesting numbers to look for. First, if the LDP wins 70 seats, it will secure a majority in the Upper House on its own. Second, 82 seats are required for those who seek constitutional reform to secure 2/3 of the seats necessary to initiate a Diet discussion towards changing the constitution. While there are important differences in the substance of the proposed change, if the sum of the number of seats of the LDP and its coalition partner Komeito, along with the Democratic Party for the People and the Nippon Ishin no Kai (Japan Innovation Party) reaches 82, the political momentum for constitutional reform can be gained. It is important to note, however, that it is not the first time the 2/3 has been met, and the process towards reform, as I described in the last Takako’s Take, is far from automatic.

What is the less-watched but possibly most significant number to watch is which opposition party wins the most seats. If the Nippon Ishin no Kai (Japan Innovation Party) wins the second-most votes after the LDP, it would mean that a party that is more “conservative” than the LDP will be the largest opposition. While Ishin as a party is not easy to pin down, the pre-election survey of candidates has generally positioned Ishin to the right of the LDP, in defense spending and constitutional reform. They are also more growth oriented (less distribution oriented) and favor a smaller government.

This is significant for three reasons. One, in the intra-Diet procedure for constitutional reform, the “first among all opposition parties” customarily plays a crucial role. Thus, if Ishin, not CDP, becomes the largest opposition, it could serve as an accelerator, not a brake, on constitutional reform. Second, Ishin’s hawkishness on defense and foreign policy could constrain Kishida’s position, if he seeks a more nuanced and liberal foreign policy. This will matter both in debates over Japan’s own defense posture, with three important defense-related policies (National Security Strategy, National Defense Program Outline, and Mid-term budget plan) to be determined by the end of 2022. Finally, while the younger voters, especially those in their 30s and 40s seem to support Ishin for its pragmatism and growth-oriented policy, Ishin’s conservative position on social issues may be at odds with what they believe. Since there may be no election for the next three years, the results of the Upper House election may lock in a conservative shift in Japanese politics, which may make it difficult for the progressive social agenda to be pushed forward.