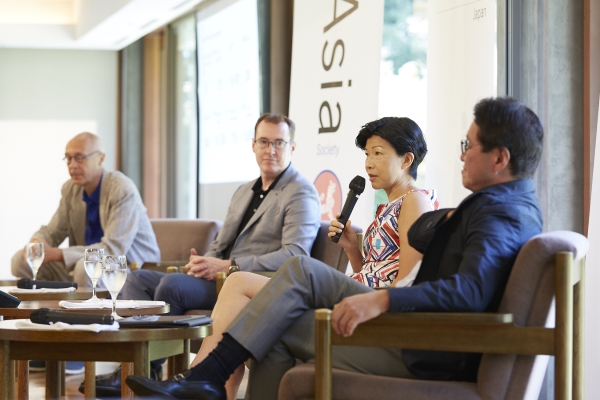 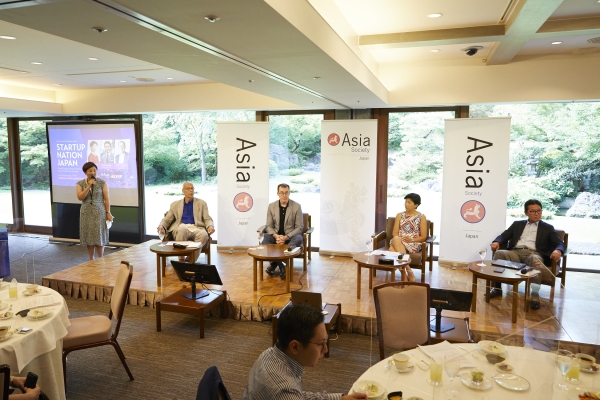 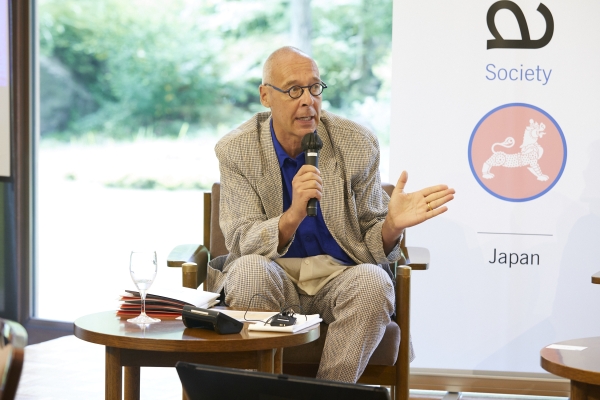 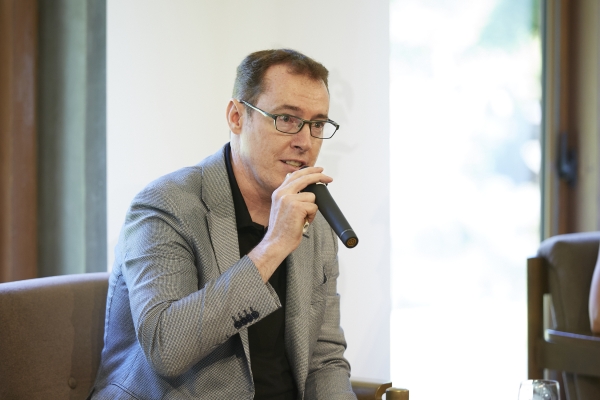 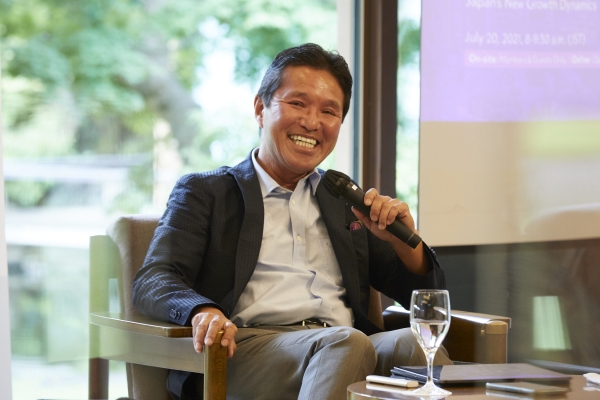 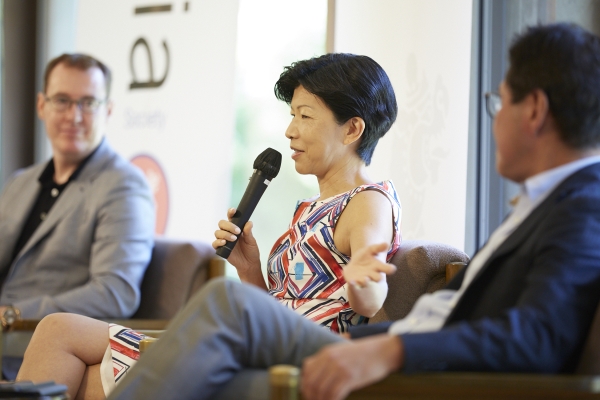 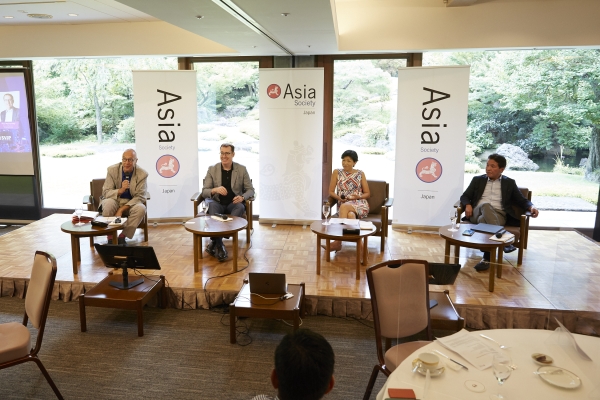 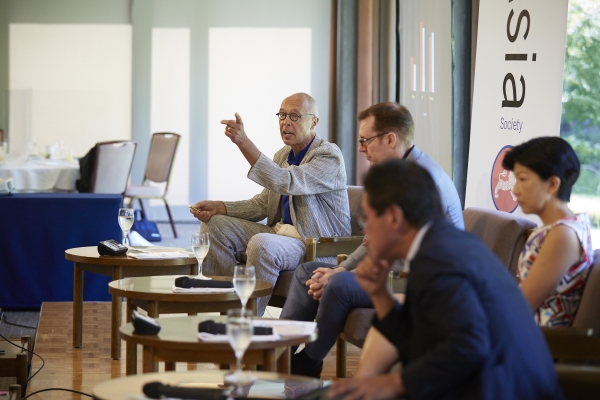 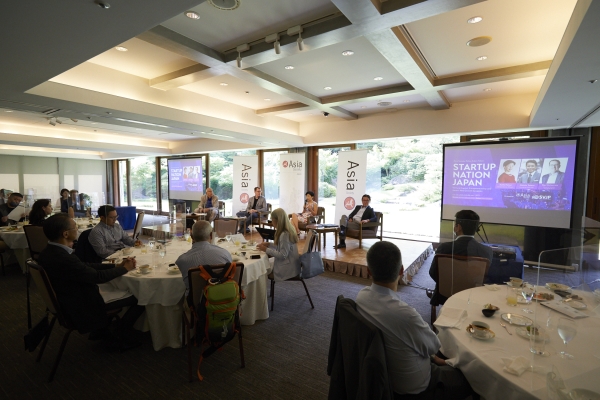 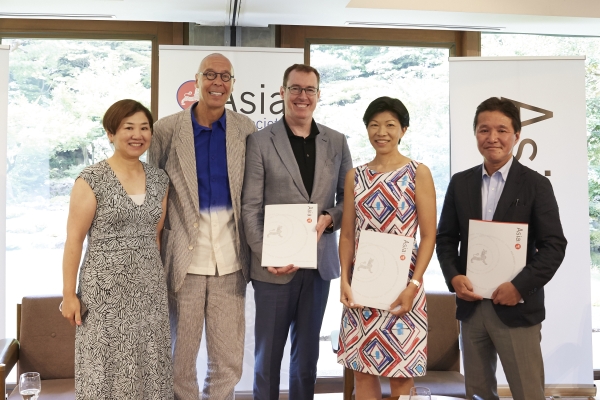 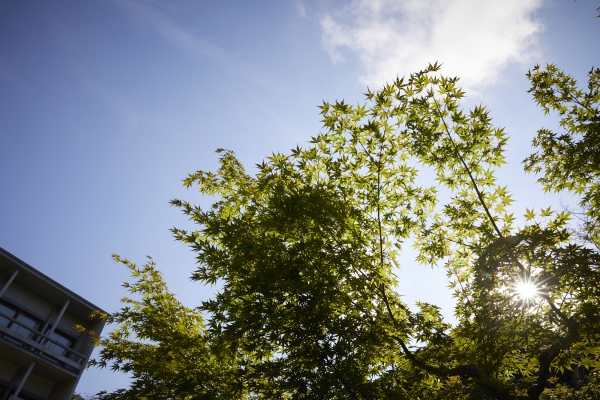 Setting the stage: the startup ecosystem in Japan 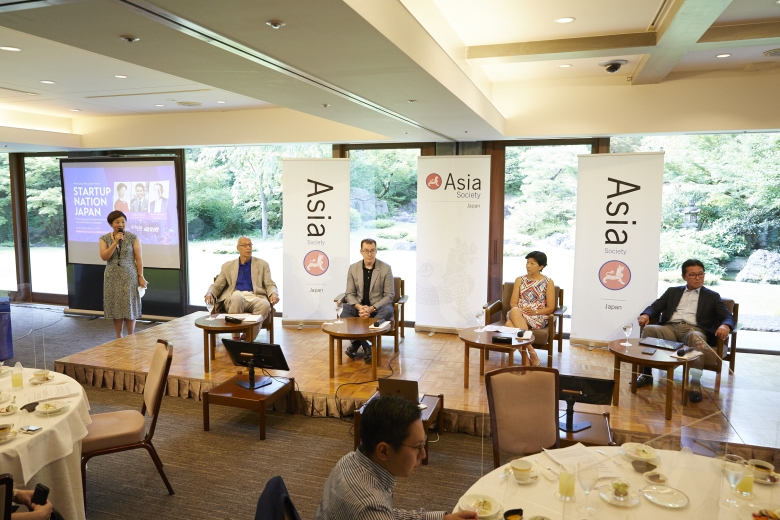 Mr. Jesper Koll began by pointing out that it is not monetary or fiscal policy but entrepreneurship that gets an economy going. The bigger the share of entrepreneurs in a national economy, the bigger the potential growth rate. The U.S. and Israel have been successful. A government should create a better environment for entrepreneurship. During the past decade in Japan, young companies under 5 years old have created two million jobs. Last year, 1,900 new startups were invested in by venture capital (VC) firms while in the US the number was 12,000. Although a gap remains between Japan and international trends, there has been movement, which three speakers were invited to speak about.

Mr. Paul McInerney, who has just joined Incubate Fund in March, a leading Japanese seed stage venture fund, gave a macro picture of the Japanese ecosystem. Total capital invested in venture companies over the past year was 4.3 billion dollars in Japan against 164 billion dollars in the U.S., where investments have been accelerating at a higher pace during the first half of this year. However, Mr. McInerney expects accelerated capital committed involvement in Japan from overseas as there has been much positive interest globally in the Japanese ecosystem. The number of initial public offerings (IPOs) in the U.S. are larger only by about a factor of two or less compared to that of Japan., Even with a much smaller scale, Japan has high-quality exits through IPOs. Going forward, Japanese startups are experiencing an increasing inflow of talents and capital. Japan is known to have few unicorns but counting post-IPO first-day pop brings Japan to a level comparable to the EU. These companies cover healthcare, deep tech, AI, social gaming and SaaS. 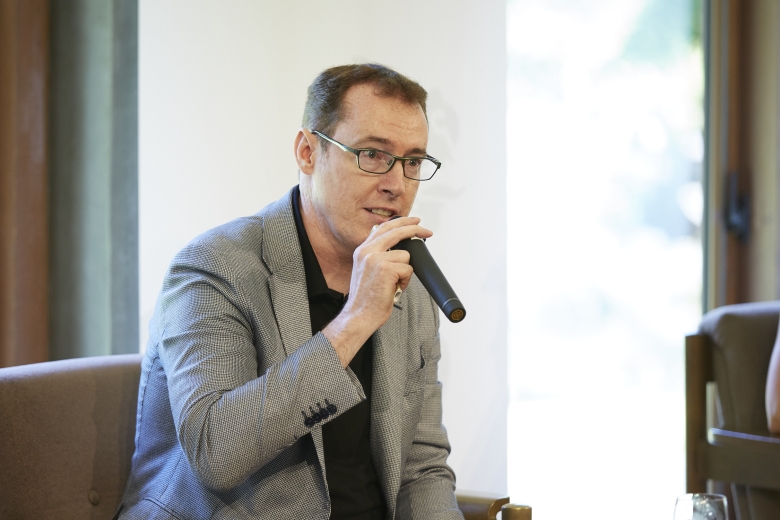 Ms. Kathy Matsui finds the evolution of Japan’s venture market standing at an exciting inflection point today, but that this is unknown to the world. MPower Partners Fund L.P. is ESG-focused and seeks to help its portfolio companies genuinely strengthen their environmental commitment, social impact and good governance, avoiding greenwashing. The fund is successfully approaching its goal to raise 150 million dollars, and is in full investment mode, having closed one deal on the day it launched. There are several other deals in the pipeline. The fund is investing in middle to later-stage startups in Japan and early-stage startups overseas particularly from the angle of entering the Japanese market.

Mr. Makoto Takano founded Forbes Japan in 2014, developing an ecosystem for startups in Japan. He established D4V (Design for Ventures) which seeks to support Japanese start-ups on a global scale. He is also focused on supporting NGOs and NPOs and founded Endeavor Japan, the world’s largest start-up support NPO in 2016. Mr. Koll commented that the Forbes ecosystem established that it is “cool” to be young and successful. Mr. Takano added that Forbes is committed to positive journalism, which does not make a lot of money, but has led to successful branding.

Diamonds in the rough? 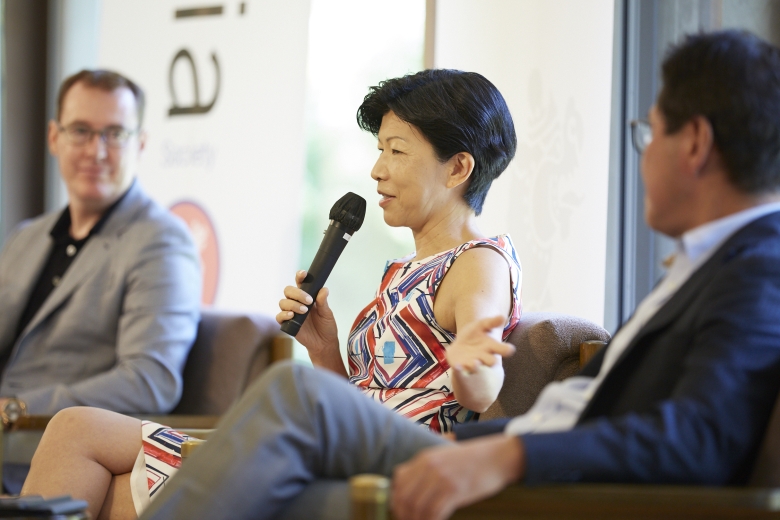 According to Ms. Matsui, the market in Japan for venture investing has grown seven-fold in seven years. She finds the recent shift of human capital to ventures to be a healthy sight. Mr. McInerney pointed out that at McKinsey & Company, for whom he worked for over a long period of time, around 150 people leave every year, with roughly half going into venture companies, which is evidence that the talent pipeline is growing, importantly with a diverse international background. Role models have accelerated this trend. He referred to Japanese entrepreneurs as “hidden diamonds.” While the ecosystem in Japan remains fairly domestic, Japanese VCs are actually world-class, with returns on venture funds in the top quarter globally. It is an opportune time for limited partners (LPs) in the US and Europe to invest in Japan and for Japanese startups to start with a global footprint.

Mr. Takano mentioned that in order for VCs to have successful access to investors, they need to be in the inner circle. This is very different from the asset managing industry in general, where competitors tend to be more open. However, as Ms. Matsui mentioned, venture investment is growing and it is not a boom but a trend. 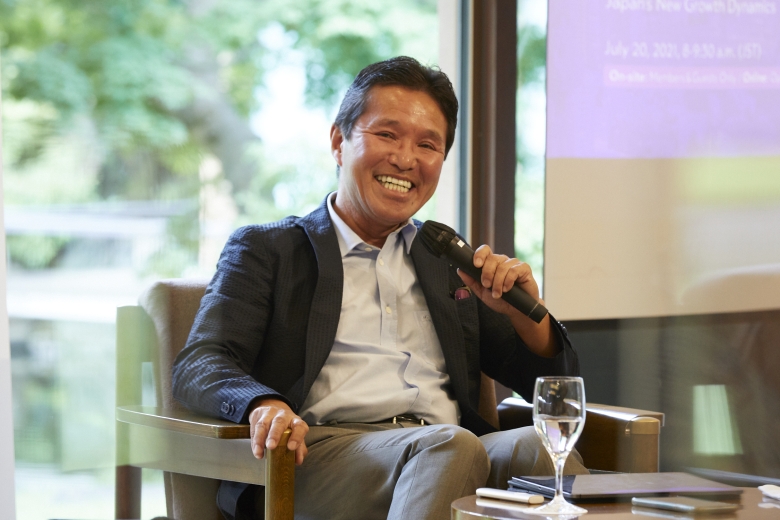 It has been pointed out that the Japanese entrepreneurs lack ambition – that many people want to be king of Shibuya but not conquer the world. Ms. Matsui pointed out that there is much opportunity in the Japanese market due to its immaturity and lack of diversity. It is true that many entrepreneurs are domestic in both thinking and scale, often because they feel that they have enough demand in Japan. She believes that many startups could scale up if entrepreneurs could be coached and supported to think bigger and connected with people in overseas market that they could partner with. One of the reasons that Japan’s venture industry has remained as small as it is that providers of later-stage capital are limited, compared to providers of early-stage venture capital. This has tempted many start-ups to go public prematurely. MPower targets later-stage startups in order to help them mature their business, gain more market traction, develop more customers and be a real company before they go public on an IPO, as well as to support them on the ESG front as well.

Mr. McInerney agreed that the level of diversity is very low in the Japanese market. He has observed a shift of investment to deep tech, which has more avenues for global expansion compared to SaaS, which can be country-specific depending on how it is architected. He seeks to coach and enable international connections. More European and American investment in Japan will lead to more support for Japanese companies to expand globally.

Design thinking is a powerful tool to develop startups. D4V is focused on design thinking, which is not yet as popular in Japan as it is in Silicon Valley. It has invested in 43 companies through the first fund and has provided design thinking services to around twenty companies. Mr. Takano highlighted that D4V is also unique in the sense that while it invests in domestic startups, it is a global company whose operations are conducted in English.

Following the initial conversation among the speakers, questions were taken from the floor. One participant feared that Japan has lost its ambitions and was skeptical of the country being intensively focused on compliance and avoiding risk. 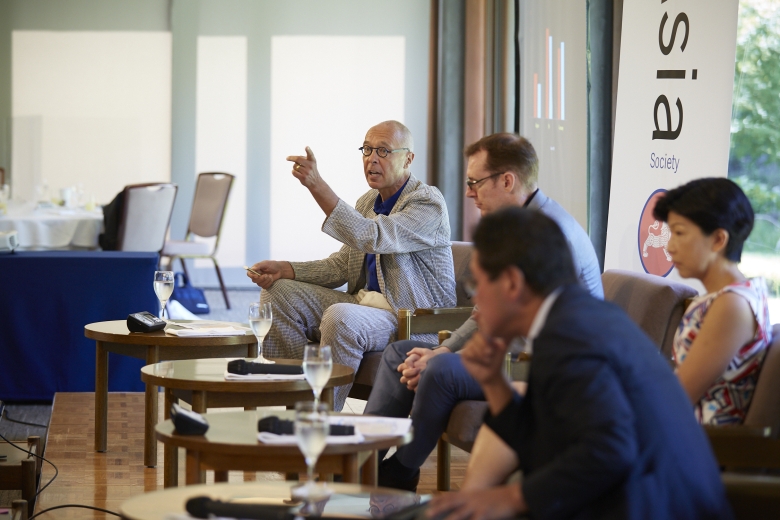 Ms. Matsui pointed out that after almost twenty years of stagnation and deflation, the economy has hit an inflection point. It is a sellers’ market in Japan and some younger generation in their twenties and early thirties who have little baggage, and therefore have little risk, have the ambition to pursue something new, instead of continuing their status quo job and waiting to rise to a higher position in the corporate hierarchy. The tide has just begun to turn.

Mr. McInerney has been frustrated in the decline in the number of students pursuing overseas studies. However, it has been encouraging to see an evolution of more people willing to take the risk of a dramatic pay cut when leaving their status quo jobs. He sees the “elite” profile changing, with the conventional equation balancing monetary flow with experience, work-life balance and high aspiration flipped.  Mr. Koll added that we are seeing the first generation of post-bubble self-made millionaires wanting to give back, not just by becoming angel investors but by mentoring next-generation founders and innovators. 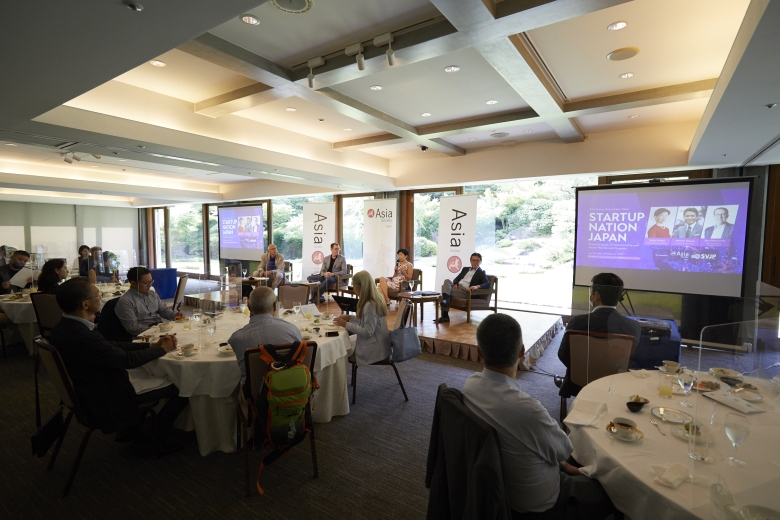 How can we redirect Japanese entrepreneurs to real problem solving and tackling the grand challenges of humanity and how can we make this a profitable game for investors as well? Mr. McInerney believes that coaching helps because many entrepreneurs tend to be confined to their experiences and observations.

It was also pointed out that Japanese companies do not empower their employees early in their careers and rather train them to be bag-carriers for a long time and thus, people are not trained to be entrepreneurs. Mr. McInerney agreed that that has been a challenge in Japan. Yet, he has found that many Japanese people who come to McKinsey, often from the government, have high aspirations and are highly competent, with the potential to make a gear change in 36 months. Mr. Koll added that intrapreneurship, is another recent trend that should not be underestimated.

Ms. Matsui explained that MPower will not only look at companies that are in ESG-related businesses but will also work with entrepreneurs that simply believe that integration of ESG principles will enhance their growth potential. To make sure that ESG is core to their business strategy, they hold multiple interviews with the leadership team to ask them what they believe are the most material ESG factors, then work with them to draw an ESG roadmap, which they will help implement through training and resources.

Globalization of the startup ecosystem in Japan 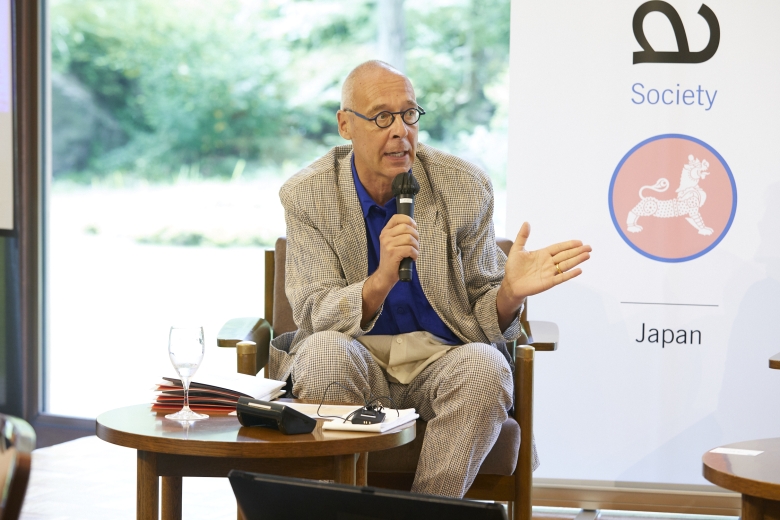 There are three aspects to globalizing a company – its market, its organization and its capital. Where should a startup begin in order to globalize effectively? Mr. McInerney commented that key management is a good place to start. Bringing on board at least two or three bilingual high-level executives who can lead the international business, including the hiring and the creation of the organization overseas, would be easier than transforming the entire company overnight. Starting early is also key.

Mr. Takano indicated that offering global support for entrepreneurs consisted of three elements: products, distribution and capital. D4V harnesses its network of IDEO designers around the world to help startups brush up their products. The company also introduces distribution networks to entrepreneurs who seek expansion into overseas markets. In terms of fund-raising, it is important to offer appropriate advice regarding who to approach. Mr. Koll encouraged the audience that increased LP participation in the venture capital firm sponsoring a startup would help them use the network of LPs.

Mr. Koll wrapped up the discussion by highlighting that there was much value among Japanese entrepreneur ecosystem to be unlocked. There are great opportunities for global arbitrage and engaging in one of the most undervalued asset classes in the world.