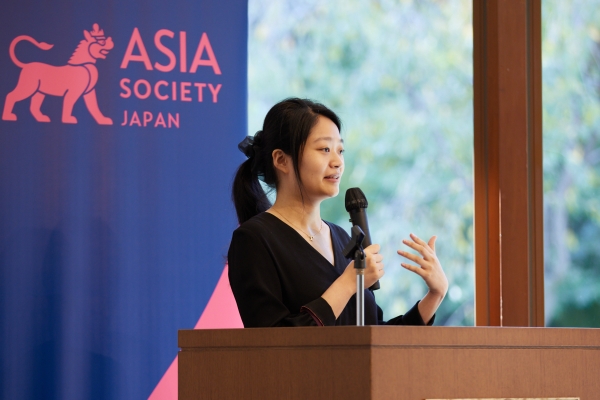 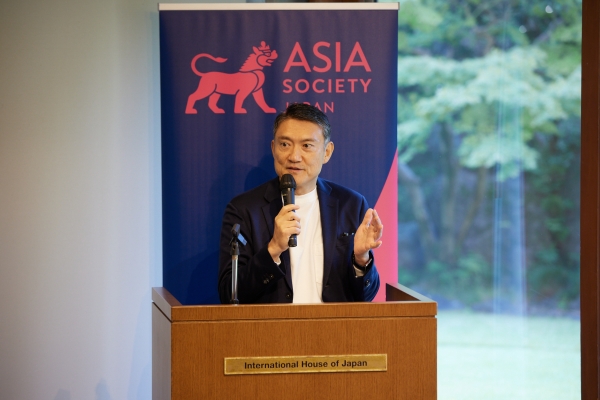 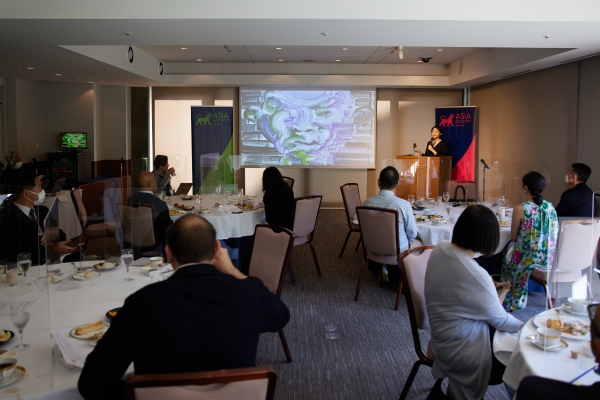 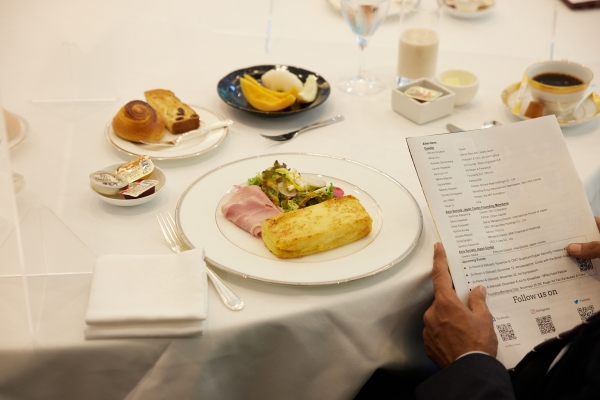 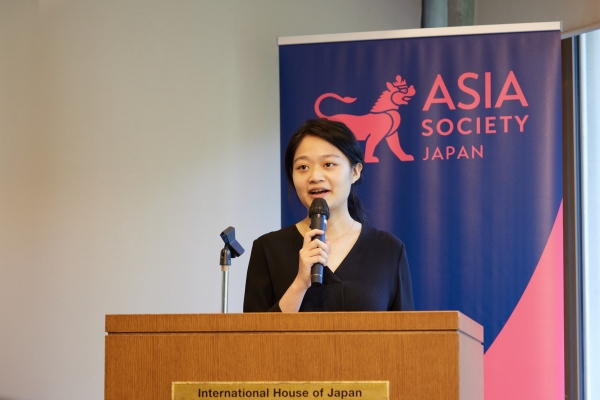 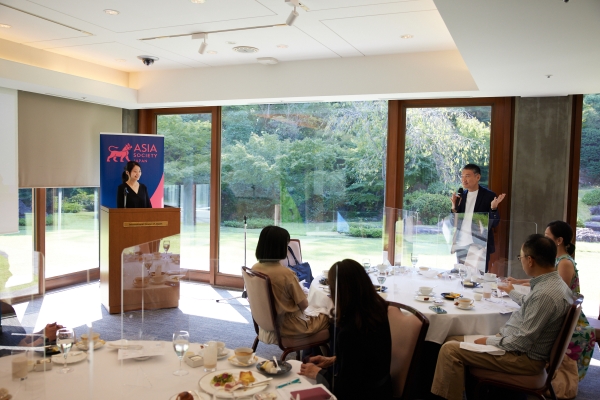 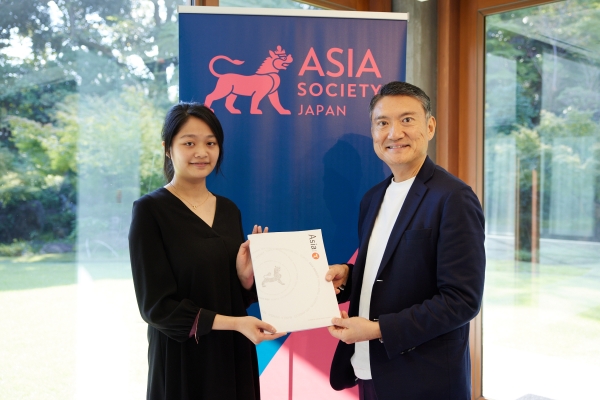 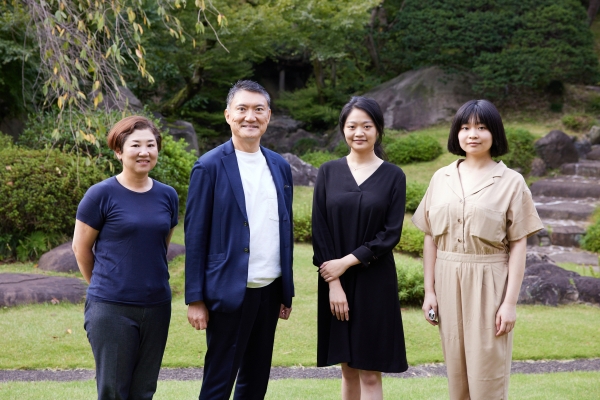 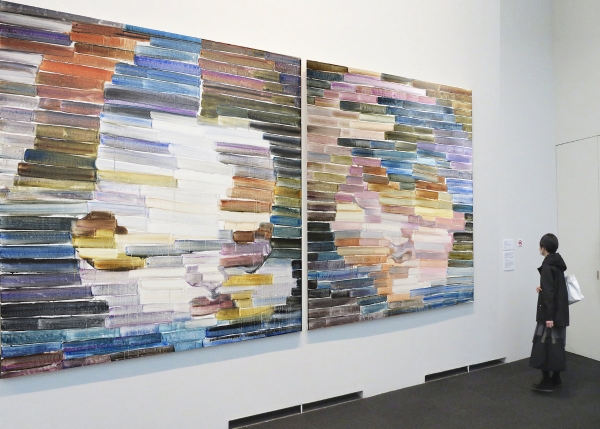 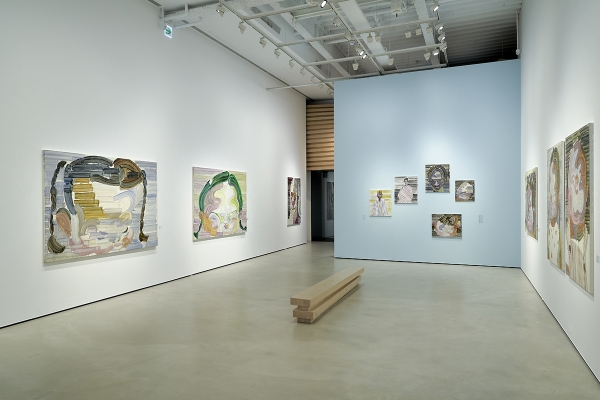 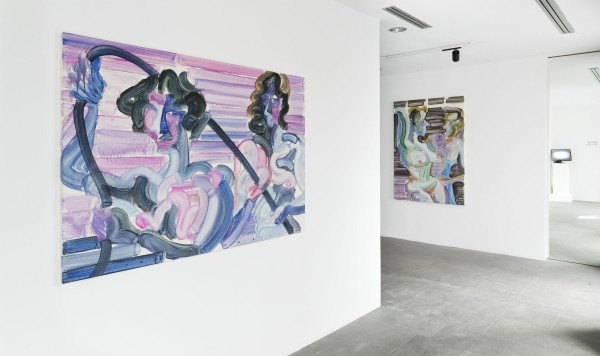 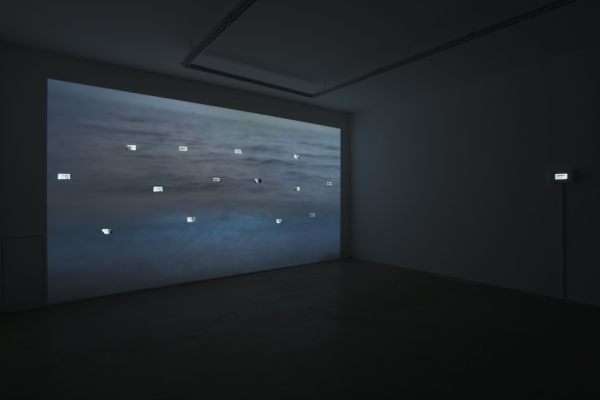 TOKYO, October 5, 2021 — Etsu Egami, an international artist, introduced her work and the process in which she explores the essence of communication through mishearing and misunderstanding. She also discussed what characterizes the third generation of the postwar Japanese artists by comparing them to the previous two generations. Yoshihiko Kawamura, arts committee member at Asia Society Japan, hosted the program.

Ms. Etsu Egami is an artist based in Tokyo and Beijing. Born in Japan, she has studied in Germany, as well as at the Central Academy of Fine Arts in Beijing, China. She has been listed as Forbes Asia 30 UNDER 30 2021 and was dispatched to New York by the Japanese Agency for Cultural Affairs. 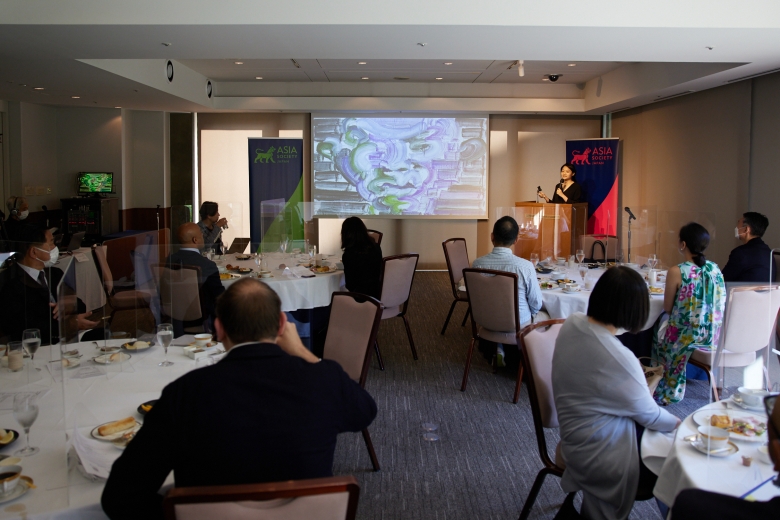 People have different interpretations of Ms. Egami’s paintings. One person my think it is a landscape; another person may think it is a portrait. This is indeed the concept of her artwork –communication. Ms. Egami seeks to visual the process of miscommunication to explore the essence of communication. She makes big brush strokes using oil paints. Composed of parallel lines and distortion, her works have no clear outline. She often paints faces, which constantly changing with emotional and spiritual connections, represent a form communication.

“A bowl of rice”: the beginning of her journey

How did Ms. Egami arrive at her unique art style? Born in Japan, she has lived in many countries growing up. Studying oil painting at the Central Academy of Fine Arts in Beijing, she hit the wall of communication. On many occasions, she would experience misunderstandings by people who she had been sure understood her words, or would be surprised that someone who had felt that she had failed to communicate with understood her perfectly. She found it fascinating that although China and Japan shared the same Chinese characters, they represented different sounds. The sound of her name pronounced in Japanese would mean “a cup of rice” in northeast China. This experience marked the beginning of her journey to explore the mysteries of language and communication. 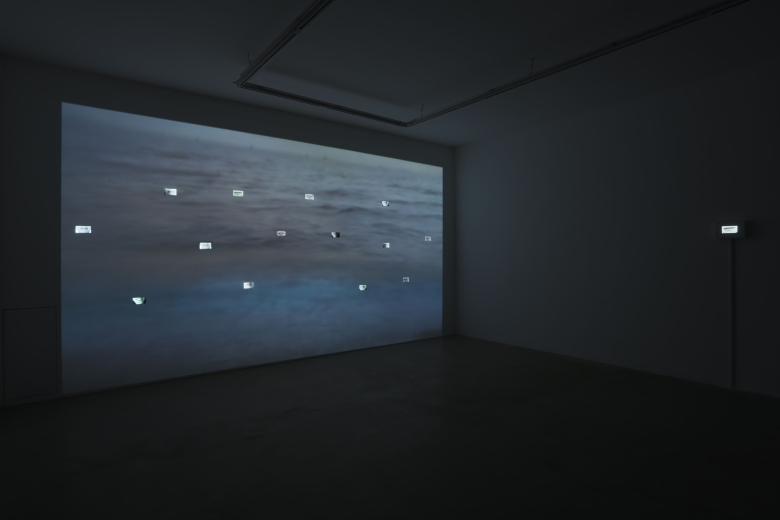 This is how she started her “mis-hearing game,” asking hundreds of people in different countries over six years to listen to a sound and immediately write down on a piece of paper what they recognized it to mean their language. She would make a record of the paper and  take a photo of the respondent. This is what Ms. Egami calls a “process of active mis-hearing and misunderstanding,” or intuitive and unconscious active misrecognition.

In Beijing, she showed “This is not a Mis-hearing game,” an interactive sound and video installation exploring the origin of language and human instinct. Recording the respondents’ voices, she would continue her dialogue with them through drawing their faces. This project became her graduation work: “Back and forth between sound wave and light wave.”

Then, she proceeded to study in Germany, where she found many hospitals with artwork hanging on the walls. She was introduced to art therapy in terminal care and studied the relationship between humans and community. Her research led to her solo show: “Into the light…”

At the Chiba City Museum of Art, she produced the “Acorn Project” to connect with local people. She played the “mis-hearing game” with visitors and drew their portrait to visualize the project. She asked them to choose an acorn on which to write their name and message. Symbolizing the conversational process that took place and the memory of it, each acorn represents a new beginning of communication that may someday sprout and grow into a tree.

In an international forum at Ms. Egami’s exhibition at the Chiba City Museum, Ms. Julie Champion, the curator of the Pompidou Art Center Paris, commented that “what is beautiful in her works is that she sees all these specificities as a source, not only of misunderstandings but also of creation and richness in people’s relationships.” 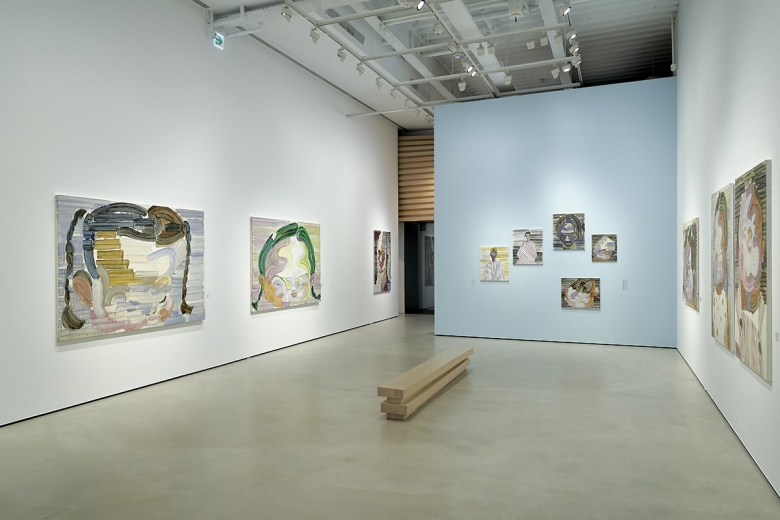 Following her overseas experiences and exploration of multi-media and installation, she returned to her starting point of painting. The “Shape of Communication” was shown at the Ueno Royal Museum and became her turning point. She discovered her approach of visualizing communication using oil paints. Through her experiments with communication, Ms Egami has found that the rainbow, in which each beautiful color shines and coexists with others, represented her perception of communication. A symbol of dreams and hope, rainbows have become her painting language.

Her solo exhibition “Rainbow” was shown at the Whitestone Gallery in Taipei and the Karuizawa New Art Museum. Her works constitute a part of the public collection at the He Art Museum. Other recent shows include “Social Distancing” in Paris, “Star Time” in Tokyo, and “Facebook” in New York.

Ms. Egami was dispatched to New York by the Japanese Agency for Cultural Affairs. While in New York, Ms. Egami went to see various art shows, receiving the impression that the New York art scene was more focused on the minorities. She was invited to talk at Museum of Fine Arts Boston, where she was appraised for her global style, which were not superficial tags of Japanese contemporary art. Her strong rush strokes represented Asian calligraphy, connecting to her concept of communication and to her reading about Asian modernity. Yet, her art bears a completely novel style. Meeting many curators in New York, she felt that they were increasingly interested in diverse origins of art.

As a Third Generation artist

In conclusion, Ms. Egami shared her views of where she stands in the Third Generation movement. First-generation artists have experienced World War 2 and the message conveyed in their works tend to represent heavy topics or Oriental philosophy, including Gutai or Monoha. Second Generation artists are have super-flat style and feature a superficial symbolization of Japanese features. Manga and otaku subculture has emerged from this generation. Third Generation are free of these superficial elements and many artist already have an international background when they start as an artist. Based on genuine experiences, they tend more to explore humanity and international commonalities.  otaku – superficial symbolization of Japanese features.

Third Generation is not an art movement limited to Japan. It is an emerging international movement with increased focus on women and other minorities. We are at a turning point for moving beyond post-colonialism and superficial national identities. Ms. Egami wishes to contribute to the contemporary art world as a Third Generation and Asian female artist. 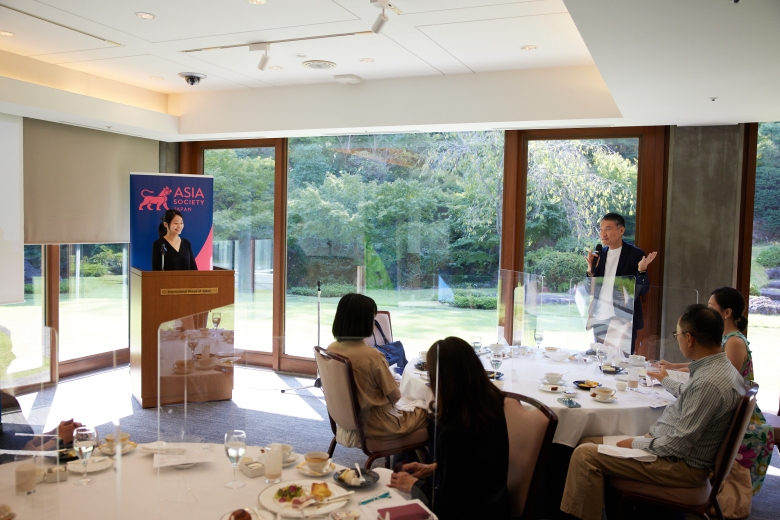 Following her initial comments, Ms. Egami took questions from the floor. Discussions covered her choice of the rainbow as her language, what makes a Third Generation artist, her future visions, aspects of her artwork that represent her Japanese identity, her Third Generation peers, and human and philosophical influence.