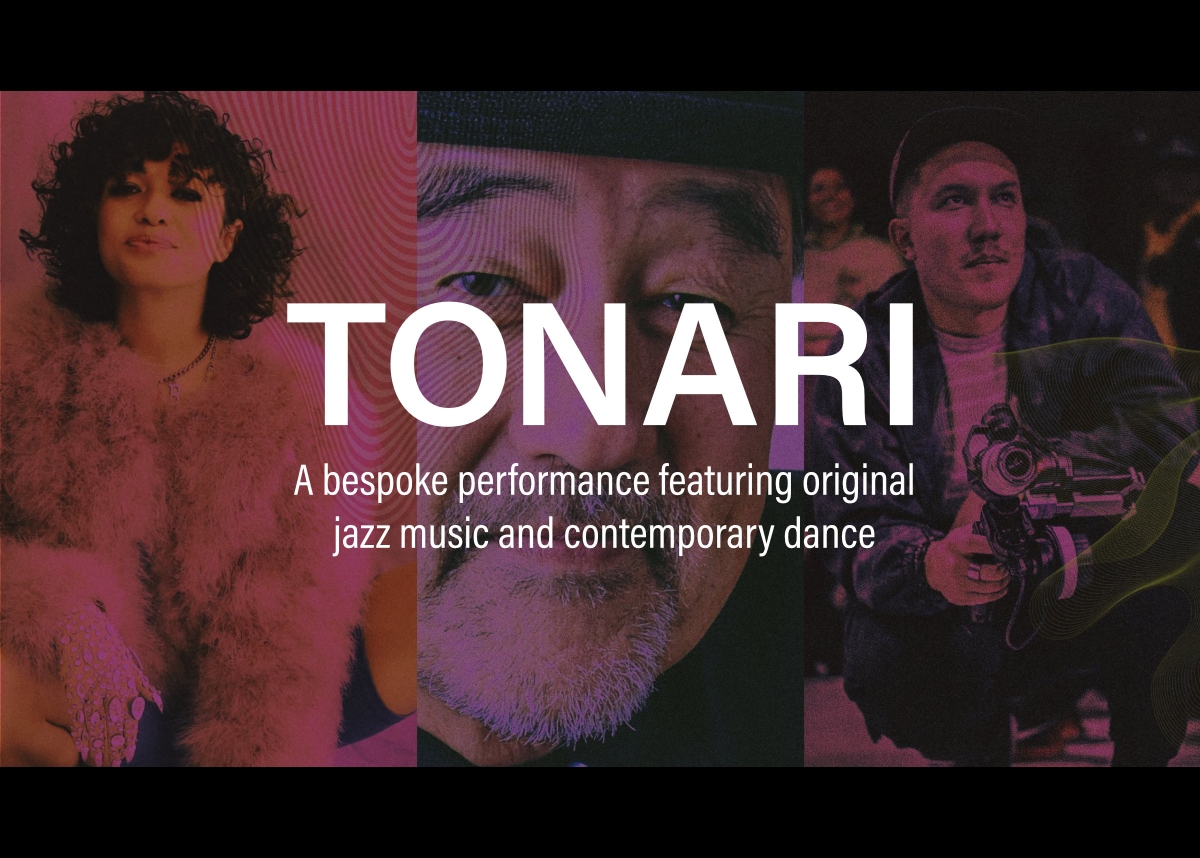 “When her mirrored reflection comes to life, a lonely dancer caught between Tokyo and San Francisco must embark on an epic chase to find herself.”

Asia Society Japan is excited to collaborate with the TONARI project not only connecting both sides of the Pacific but connecting film, dance, and music. Please join us to kick off 2023!

What is TONARI? TONARI is a short film and live performance in one, a cross-cultural, cross-generational, storytelling experience through contemporary dance and jazz music. Following the show will be a live Q&A hosted by the Asia Society with Executive Producer Sophia Noel and Band Leader Akira Tana.

This piece seeks to explore new ways for performing arts to connect cultures and people together for learning and creation by merging physical with digital culture, fusing traditional with contemporary art forms, and forging a pathway for Tokyo, San Francisco, Black and Japanese art exchange for the first time. 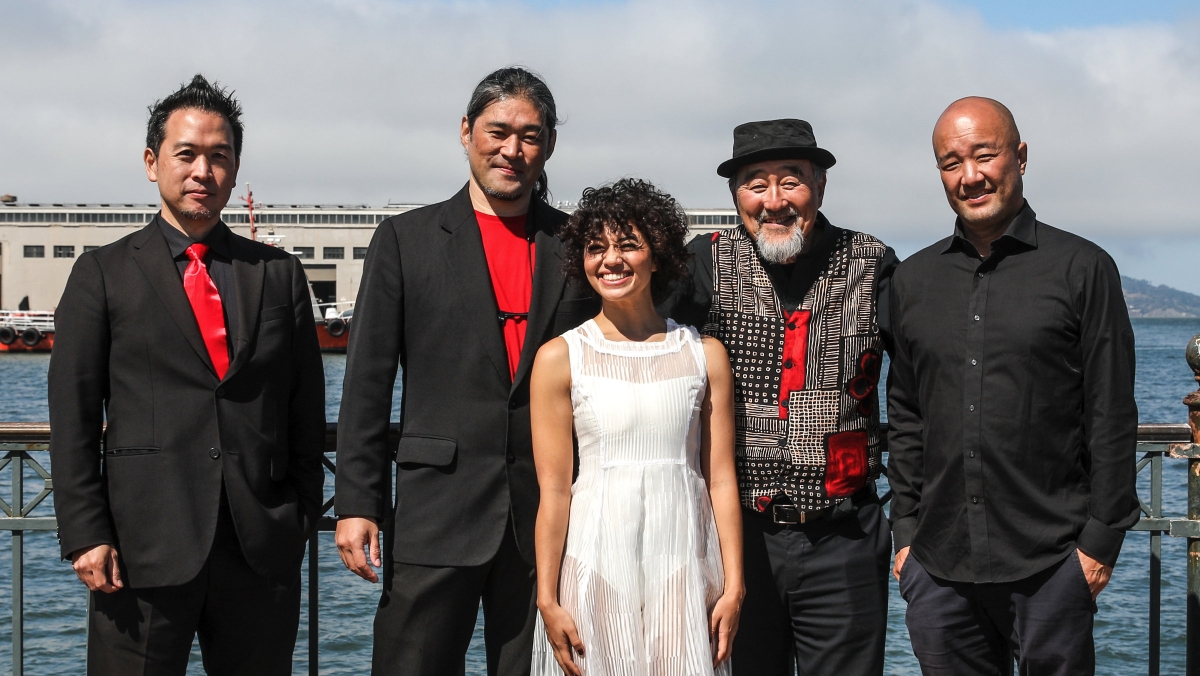 Sophia Noel is a contemporary dancer based in Tokyo with Hip-Hop, Salsa, Swing, and Ballet in her repertoire. Graduating from Columbia University, she joined the marketing team at Airbnb headquarters and in addition served as the director of the internal dance program, teaching classes, choreographing and producing performances. In 2019, curiosity around the Japanese language sparked the idea to book a one-way ticket to Tokyo where she now performs, choreographs, teaches, and more.

Born and raised in California, Akira Tana earned degrees from Harvard University and the New England Conservatory of Music. There he performed in both classical and jazz idioms, playing with the Boston Symphony Orchestra and student ensembles as well as with musicians such as Helen Humes, Milt Jackson, Sonny Rollins, George Russell, and Sonny Stitt. Tana recorded frequently as a sideman in the 1980s and began releasing albums as a leader in the 1990s. Currently he is a professor at the San Francisco Conservatory of Music.

In America’s hyper-sensitive racial climate, art forms and energies tend to be landlocked. Often public reactions confine artists and audiences by their backgrounds: your identity becomes a barrier of what you can create and what you can enjoy. Sentiments of gatekeeping, “Black music is only for black people” or “Only Japanese people can wear kimonos” are pervasive. Meanwhile, Japan’s physical borders have been closed from the rest of the world for over two years which has created challenges for artists in Japan to exchange and showcase Japanese culture on the global stage. Akira and Sophia have come together to break open these borders. Uniquely having the perspective of feeling native and foreign in both places, the two came together to craft a piece to highlight this shared experience and joy of each other’s cultures. This is not cultural appropriation, this is unabashedly pushing forward culture, together.

In Akira’s Words, “Having studied the sociological implications of an art form introduced to Japan from America that has its roots in African American culture and also culturally raised in the United States as a Japanese American whose family had experienced the WWII internment of Japanese and Japanese Americans, it is a valuable and timely endeavor to combine dance and the rhythm of drums to express a diplomatic convergence of influences to create unity and contribute to the continuum of the effort through art to achieve successful cross-cultural understanding. For an African American dancer to dance in Tokyo with a Japanese American jazz percussionist in America, live and through the medium of film, is a reversal of roles. This meeting of two different disciplines nevertheless demonstrates the unlimited potential to help close and heal the deep divisions in our present-day society through art, specifically dance and music.”

The creation of this piece has been rooted in collaboration between countless artists connecting the worlds of Black and Japanese art:

Ben Tarquin, the director of the film, “TONARI” is based part of the year in Japan and part of the year in his hometown Oakland, CA, Tarquin is an international videographer, photographer and editor, at the intersection of the classical arts, documentary, and street dance. Tarquin grew up to the sounds of the Oakland underground before studying architecture at La Villette in Paris, France. His experience in design led him over the last decade to help build YAK Films into an internationally acclaimed video production company capturing new forms of street dance emerging from the United States, Europe, and Asia.
https://www.instagram.com/bzwax510/

Reiko Sudo, costume designer, is managing director of NUNO and one of Japan's most influential textile designers. Her textiles have been exhibited around the world, including the Metropolitan Museum of Art and the Museum of Modern Art in New York.
https://www.nuno.com/en/

Maud Arnold, Artistic Director of the film “TONARI” is a world-renowned tap dancer. Maud Arnold is a member of the female tap band, the Syncopated Ladies, widely known for viral videos that have accumulated over 70 million views, is the co-director and producer of the critically acclaimed DC Tap Festival pioneering new experiences for dancers and artists worldwide, and has taught dance in Dubai, Brazil, Japan, Spain, Haiti, United Kingdom, Mexico, Canada, Croatia, Ukraine and Russia.
https://www.maudarnold.com/

Sayuri Hirayama, co-choreographer of the live performance “TONARI” is a Tokyo-based dancer and choreographer specializing in ballet, jazz, and contemporary house. After graduating from Keio University, she joined Recruit, where she works both as an office worker and as a dancer. Since dedicating her life to being an artist, she has expanded to piano, modeling and acting, both on film in commercials and on the event stages.
https://www.sauri55.com/

Yanghee Oh and Myongsuk Ri, producers of the live performance “TONARI”, are based at Avex, a Japanese entertainment company and have experience putting together many live shows for Korean and Japanese pop artists across Asia. Avex believes in making impossible entertainment possible.
https://avex.com/jp/ja/

For event details visit https://asiasociety.org/japan/events/tonari International House of Japan B1