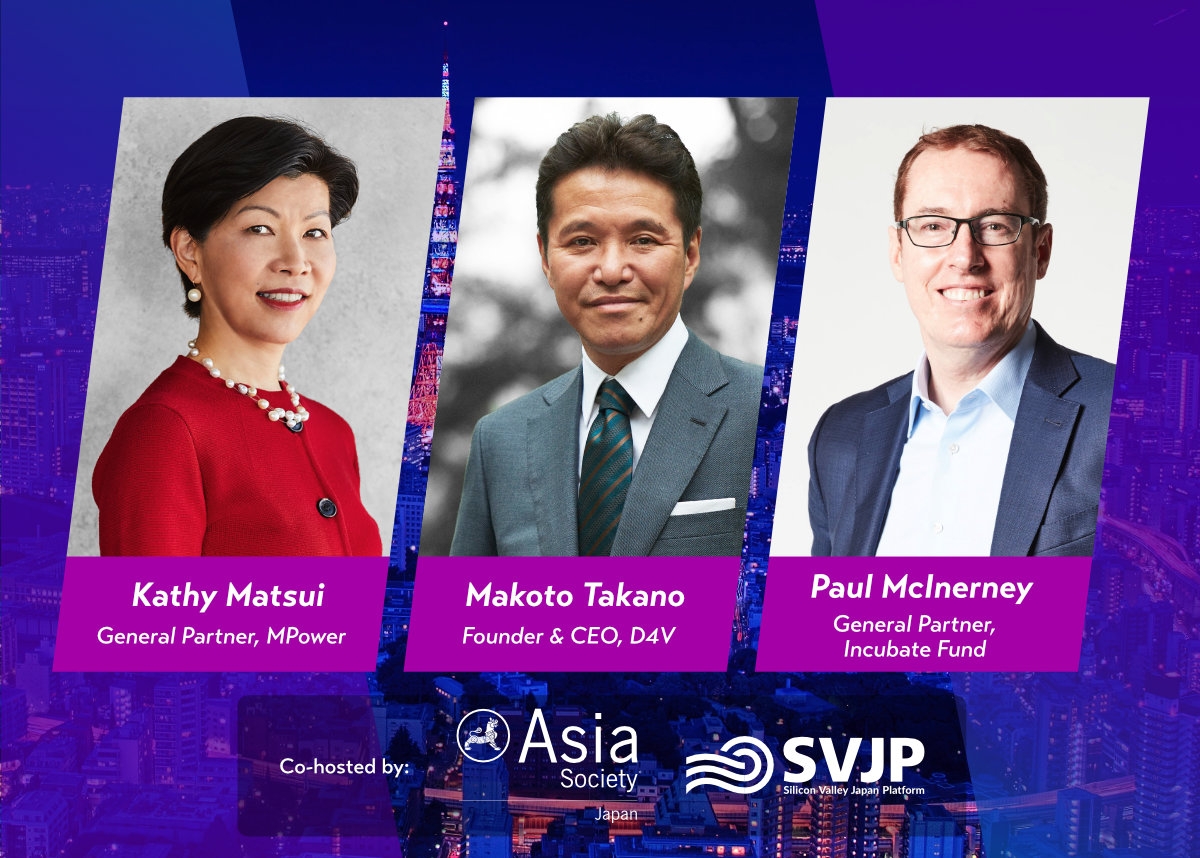 In this new series, Asia Society Japan aims to introduce and promote to our members the forces of change now shaping Japan’s new growth dynamics. Slowly but surely a self-sustaining ecosystem around start-ups is emerging in Japan, with domestic-funded venture capital now beginning to force local startups and entrepreneurs to raise their game; to think bigger, beyond just Japan; and to professionalize teams and business plans.

Clearly, Japan is far from Sillicon Valley or Israel, but, for the first time since the high-growth period of the 1960s, the innovation and commercialization drivers are shifting away from the proud establishment players of Japan Inc. towards new entrants and challengers. Our new program —Startup Nation Japan— seeks to stimulate our members by introducing in regular sessions different players and social forces now shaping the future of Japanese business and society. We trust that, as usual, the exchange of ideas and opportunities between upcoming movers and shapers with our Asia Society community is poised to become a catalyst for a better future.

For the kick-off session, we are honored to introduce you to some of the thought- and action leaders in Japan’s emerging venture capital scene. The session will leave you with a real-world perspective of both the opportunities and the challenges in Japan’s journey to become a Startup Nation from a Venture Capital perspective.

The session will be moderated by Jesper Koll, Chair of Asia Society Japan Center Policy Committee,  with ample time for audience interaction.

For future sessions will feature leading actors from different parts of the ecosystem, e.g., from entrepreneurs, regulators, tax agencies, politicians, universities, big-business incumbents, etc. We also aim to have some Asian insights to help put Japan’s dynamism into a global context.

Kathy Matsui
General Partner, MPower
Kathy is the former Vice Chair of Goldman Sachs Japan and Chief Japan Equity Strategist. Her groundbreaking ʻWomenomicsʼ research spurred the Japanese government to promote gender diversity, and she has advised corporations on governance and diversity best practices. She has an MA from Johns Hopkins School of Advanced International Studies and an AB from Harvard.

About MPower
MPower Partners Fund L.P. is to empower entrepreneurs providing tech-enabled solutions to societal challenges and drive sustainable growth through ESG (Environment, Social, Governance) integration, a type of fund not present in Japan’s VC industry until now.
The fund will focus on investments into growth- to late-stage Japanese startups, and the remainder into earlier-stage overseas startups, in industries such as healthcare/wellness, fintech, next-generation work/education, next-generation consumer, and environment/sustainability.

Makoto Takano is Founder & CEO of D4V, where he oversees all investments and operations. Mr. Takano is also Chairman of linkties where he is Chairman and Publisher of Forbes JAPAN. Prior to founding linkties, he was Managing Director and President of PIMCO Japan and head of marketing at Goldman Sachs Asset Management. Mr. Takano’s extensive experience in financial services also includes work at Daiwa Securities where he was head of the strategy team at Daiwa Institute of Research and published extensively on the capital markets. He is Founding Board Member of Endeavor Japan, Senior Managing Director of Japan Venture Capital Association, Board Member of GHV Accelerator and Asia Pacific Initiative as well as on the Editorial Board of Tokyo Financial Research. He holds an MS and BS in engineering from Waseda University.

Paul joined Incubate Fund as a General Partner in March 2021.

Paul has authored articles in the Harvard Business Review, Nikkei Business, Toyo Keizai and has been a speaker at multiple industry events. Paul grew up in Australia and has been a resident of Japan for the past 30 years. He is a co-founder and board member of UWC ISAK Japan.

About Incubate Fund
Incubate Fund is a leading Japanese seed stage venture fund with over $700 million in assets under management. Through our five flagship funds we have invested in over 175 companies over the past ten years, and our investment returns rank in the top quartile of all global venture investors.

We are an energetic contributor to the growth of venture capital in Japan. Tohru Akaura chairs the Japan Venture Capital Association and we have a unique program for the development and support of first time venture capitalists - providing them with a five year apprenticeship program and funding for their first fund.

(On-site: Members & guests only / Online: Open to the public)