[Leaders Shaping the Future of the Indo-Pacific] Equal Rights and Same-sex Marriage for LGBTQ in Asia: How to Create an Inclusive and Kind Society | Asia Society Skip to main content

[Leaders Shaping the Future of the Indo-Pacific] Equal Rights and Same-sex Marriage for LGBTQ in Asia: How to Create an Inclusive and Kind Society 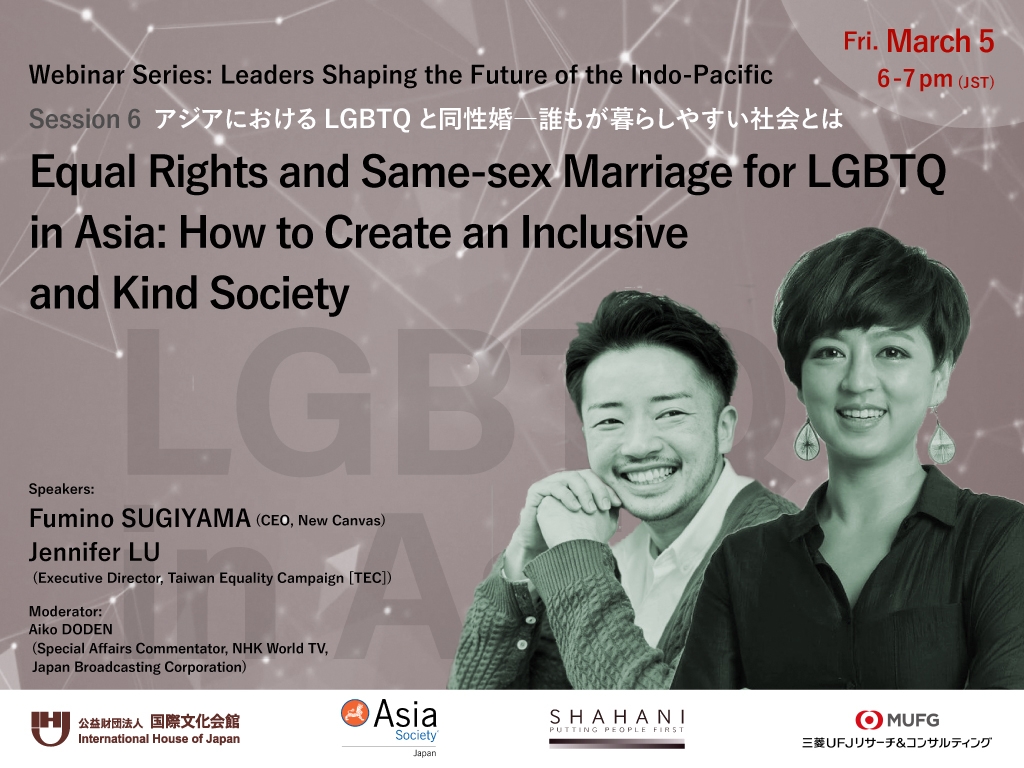 Taiwan is among the 29 countries in the world, and the first in Asia, to have legalized same-sex marriage. In Japan, efforts to guarantee the legal rights of LGBTQ individuals have been made at the local level, as was first seen in Shibuya Ward in 2015, and today more than 60 local governments recognize same-sex partnerships. Yet there is a lack of understanding toward sexual minorities, and obstacles facing the LGBTQ community seem to reflect the overall rigidity of society.

In this session, we will think about how we can make society inclusive and kind for all, including LGBTQ groups and anyone feeling a lack of empowered in the current world—with two leading LGBTQ activists in Asia: Jennifer Lu, who led the campaign for same-sex marriage legalization in Taiwan, and Fumino Sugiyama, who was deeply involved in the enactment of the same-sex partnership ordinance in Shibuya.

Born in Taipei, Jennifer Lu is an activist, feminist, and social worker devoted to LGBTQ rights and political reform movements for over 15 years. After earning a bachelor’s degree in social work from National Taiwan University and a master’s degree in policy studies from Sydney University, Lu focused for a decade on establishing an LGBT community support system and services and gender equality education. In January 2016, she represented the Social Democratic Party and ran for a parliamentary seat in the general election as one of the first lesbian candidates in Taiwan. Prior to her current position, Lu served as Chief Coordinator of the Marriage Equality Coalition Taiwan and Senior Fellow at the Taiwan Tongzhi (LGBTQ+) Hotline Association, during which she organized several successful rallies; one was attended by over 250,000 people supporting marriage equality and pushed the whole of society to achieve such a social milestone. Following the legalization of same-sex marriage in 2019, Lu and her team launched the Taiwan Equality Campaign to keep on fighting for equality and human rights for a better Taiwan.

Born in Tokyo, Fumino Sugiyama is a transgender activist and leading campaigner for a better understanding of sexual minorities in Japan—based on the idea that addressing the needs of minorities will also help resolve the issues faced by the majority. After earning a master’s degree from Waseda University in 2007, Sugiyama spent two years backpacking around the world, visiting over 50 countries and the Antarctic, during which he faced various social issues. He became actively involved in awareness-raising activities for LGBTQ issues in the early 2010s, and took part in the effort to make Shibuya Ward become the first municipality in Japan to recognize same-sex partnerships in 2015. Sugiyama currently serves as a member of the Shibuya Ward Gender Equality and Social Diversity Promotional Committee as well as a co-chair of Tokyo Rainbow Pride. Publications include Daburu hapinesu (Double Happiness; Kodansha, 2006) and Moto joshi kokosei, papa ni naru (A Former High School Girl Becomes a Papa; Bungei Shunju, 2020). He is a former member of the Japan women’s national fencing team.

Aiko Doden has expertise in reporting on a wide range of global issues from hard security to human security. As a commentator, she covers Southeast Asia, Japan-US relations and Japan’s foreign policy. Doden is a popular face on TV, having anchored key news programs such as NHK Good Morning Japan, NHK News at 9 PM, NHK World Network, and NHK Asian Voices. She was a correspondent based in Thailand extensively covering ASEAN countries. She holds an MA from Columbia University and translated I Am Malala: How One Girl Stood Up for Education and Changed the World into Japanese (Iwanami Shoten, 2014). She has served as Trustee at the International House of Japan since 2018.

*The webinar series Leaders Shaping the Future of the Indo-Pacific was launched in January 2021 with the aim to “contribute actively to future peace and coexistence in the Indo-Pacific by strengthening networks in the region.” Since Covid-19 became a global pandemic, there has been a concern that the continuing restrictions on the movement of individuals may strengthen the global trends of anti-globalism, nationalism, and racism, which can result in a growing sense of division among people. Cooperation and solidarity across Asia as a whole are all the more important in order for us to recreate a world that instead connects people. In this webinar series, we will invite leaders and experts from the Indo-Pacific region as speakers to share knowledge and insights with others and to examine the current challenges accentuated by Covid-19 through various perspectives such as governance, education, diversity, the smart city, and architecture. From there we will explore how we can cooperate and stand together in these unprecedented times.

Click for directions
Register Now
20210305T180000 20210305T190000 America/New_York Asia Society: [Leaders Shaping the Future of the Indo-Pacific] Equal Rights and Same-sex Marriage for LGBTQ in Asia: How to Create an Inclusive and Kind Society In this session, we will think about how we can make society inclusive and kind for all, including LGBTQ groups and anyone feeling a lack of empowerment with two leading LGBTQ activists in Asia: Jennifer Lu and Fumino Sugiyama.