Co-hosted by Asia Society Japan and International House of Japan 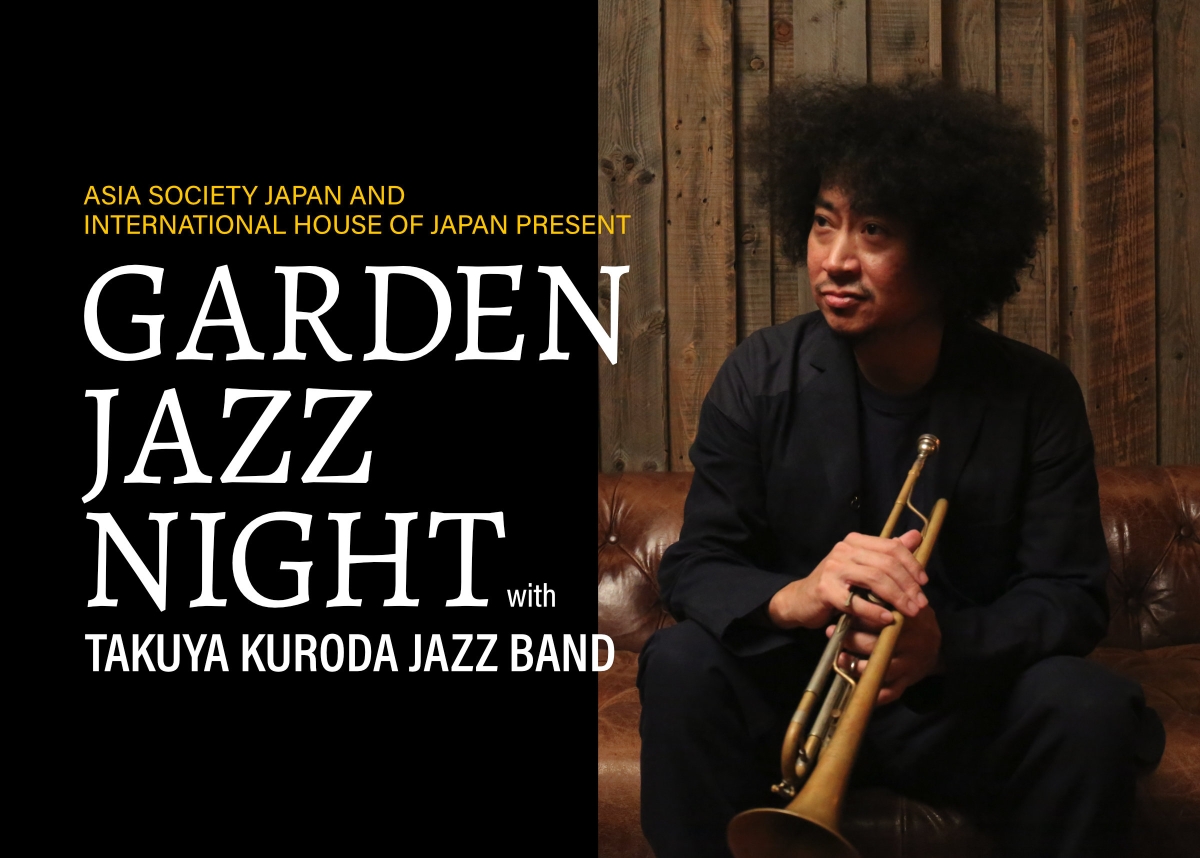 Celebrating early summer, good music, and friends, we invite you and your guests to a live jazz performance at the I-House Gardens. Jazz trumpeter, Takuya Kuroda and his band will play for us in the 200-year-old Japanese garden! There will be jazz standards, oldies but goodies, and some of Takuya’s newer pieces. It’s an evening not to be missed.

Collaborating with jazz legends like Jose James, Takuya spends time in both New York in Japan. “Kuroda is the next Dizzy Gillespie” is what NPR (National Public Radio) noted upon the release Edge, his second album in 2011. His music goes beyond musical borders collaborating with artists like DJ Premier, JUJU, Cero, and Misia. No stranger to Asia Society, after his major debut in 2014 from the Blue Note Label, he performed at our New York headquarters. Please join us for a jazz evening!

Cocktails and finger food will be served, but no dinner!

Takuya Kuroda
Jazz trumpeter Takuya Kuroda is a forward-thinking musician with a bent toward mixing post-bop and adventurous soul-jazz. Born in Kobe, Japan, Kuroda followed his older trombonist brother into the local music scene, playing in big bands. After studying music in Japan, Kuroda relocated to New York and enrolled in the New School Jazz Contemporary Music program, graduating in 2006. While at New School, Kuroda befriended upcoming jazz vocalist José James, who invited Kuroda to record with him. Kuroda appeared on James' 2010 sophomore album, Blackmagic, and later on No Beginning No End – for which he also wrote the horn arrangements.

After graduating, Kuroda quickly ensconced himself in the vibrant N.Y.C. jazz scene, performing with such artists as DJ Premier, Akoya Afrobeat, and a myriad of others. In 2011, Kuroda released the independently produced album Edge, followed by Bitter & High and Six Aces in 2012. In 2013, Kuroda signed with Blue Note Records and recorded his third solo album, the José James-produced Rising Son. Released in 2014, Rising Son featured a strong soul-jazz and hip-hop influence exemplified by the presence of several Roy Ayers compositions including “Everybody Loves the Sunshine,” which featured James on vocals.

David Bryant
Pianist/Composer David Bryant is a world-class artist. Few musicians today match the versatility, originality, and sensitivity that he brings to the music. He combines an extensive knowledge of the jazz tradition and other diverse musical idioms, as well as an individualistic approach and sound. It is no surprise that he is quickly rising to the top of the international jazz scene.

Born and raised in Brooklyn, Mr. Bryant started playing piano at age 4. By age 8, he was competing and ranking in some of the New York area’s most prestigious youth classical piano competitions, such as BACA and the Queens College Festival of Music Competition. Four years later, David also began playing cello and trumpet, performing with youth symphonies and chamber programs on all three instruments. As a result of his dedication, he was accepted to New York’s prestigious LaGuardia High School of Music and Arts. It was here that David became interested in jazz.

While at LaGuardia, David quickly became an integral part of the Senior Jazz Band and combos as well as the All-City Jazz Band. He won the “Outstanding Soloist” award at Lincoln Center’s Essentially Ellington competition, as well as being invited to participate in the Monterey Jazz Festival and the North Sea Jazz Festival. In his senior year, he was selected to the Grammy Foundation’s All-American Jazz Combo. In 2001, he received a scholarship to study at the New England Conservatory. He made the most of the opportunity, establishing himself as a professional musician in Boston while continuing his studies; joining the Boston Jazz Reparatory Orchestra (BJRO), performing weekly at Wally’s Jazz Cafe, while performing with various ensembles at clubs like The Regatta Bar, Scullers, etc. In 2005 he graduated with a degree in Jazz Performance and a distinction in music.

David returned to New York City and pretty quickly established himself in the music scene, performing with renowned musicians such as Roy Haynes, Dave Holland, Christian McBride, Jimmy Heath, Steve Coleman, Kenny Wheeler, Wynton Marsalis, Eddie Henderson, Bob Brookmeyer, Ravi Coltrane, Christian Scott, Thundercat, Esperanza Spalding, Queen Latifah and more. He is featured on records by Steve Coleman, Steve Davis, Myron Walden, Jen Shyu, Marcus Strickland, Jeremy Pelt, as well as the soundtrack for the George Clooney movie Leatherheads (2008). He has performed and can be seen at Venues internationally; such as Umbria Jazz, Stockholm Jazz Fest, La Villette Fest, Nonoichi Jazz Fest, and many more. Currently, David is a regular member of the Louis Hayes Quintet, recording albums Return of the Jazz Communicators (2014) and Serenade for Horace (2017), as well as various ensembles with Henry Threadgill, appearing on Double Up, Plays Double Up Plus (2018), and Dirt...And More Dirt (2018). His much anticipated debut album is due to be released in 2019.

Akihiro Nishiguchi
Born and raised in Japan, Saxophonist and jazz composer Aki Nishiguchi first began playing the saxophone at the age of 11. After studying music in Kobe, Nishiguchi decided to pursue his musical studies overseas. In 2004, he was accepted into Berklee College of Music in Boston on scholarship where he studied with legendary musicians and educators Frank Tiberi, George Garzone, Joe Lovano, and Hal Crook. After graduating from Berklee with honors, Nishiguchi moved to Brooklyn, began playing regularly with various ensembles in the New York City area, and also became active on the international jazz festival circuit, which has taken Nishiguchi and his brand of jazz all through the U.S., Europe, Japan. In 2020, Nishiguchi released the solo album: FOTOS featuring James Macaulay on Trombone, Marty Holoubek on bass, Hakuei Kimon on Piano, Sohta Kira on drums, and Merinda Dias-Jayasinha on vocal. Nishiguchi currently resides in Tokyo and leads his own group, as well as tours as a sideman around the world.

Shin Sakaino
Shin Sakaino is an extraordinary bassist, educator, and composer who has already made a big name for himself on the East Coast and in Japan. He is a markedly versatile musician, performing with equal aplomb on both acoustic and electric bass and in various styles, including Jazz, Gospel, Latin, Brazilian, R&B, Hip Hop, and Funk. As an educator and composer, he has a rich wealth of knowledge in music theory as well as the creativity to break barriers.

In 2007, Shin Sakaino received a scholarship from the prestigious Berklee College of Music and moved to Boston USA to study Contemporary music and World music. Mr. Sakaino received the “Berklee Outstanding Award” in 2010. After He joined the Global Jazz Institute for a one year program, directed by Grammy Award winning musician, Danilo Perez, with a full scholarship.

In 2011, Shin Sakaino moved his activity base to NYC  and deepen exchanges with people all over the world and has performed at Jazz at Lincoln Center, the Kennedy Center and Carnegie Hall, Blue Note NYC, Birdland among many other famous venues.

International House of Japan Gardens and B1

For event details visit https://asiasociety.org/japan/events/garden-jazz-night-takuya-kuroda-jazz-band International House of Japan Gardens and B1