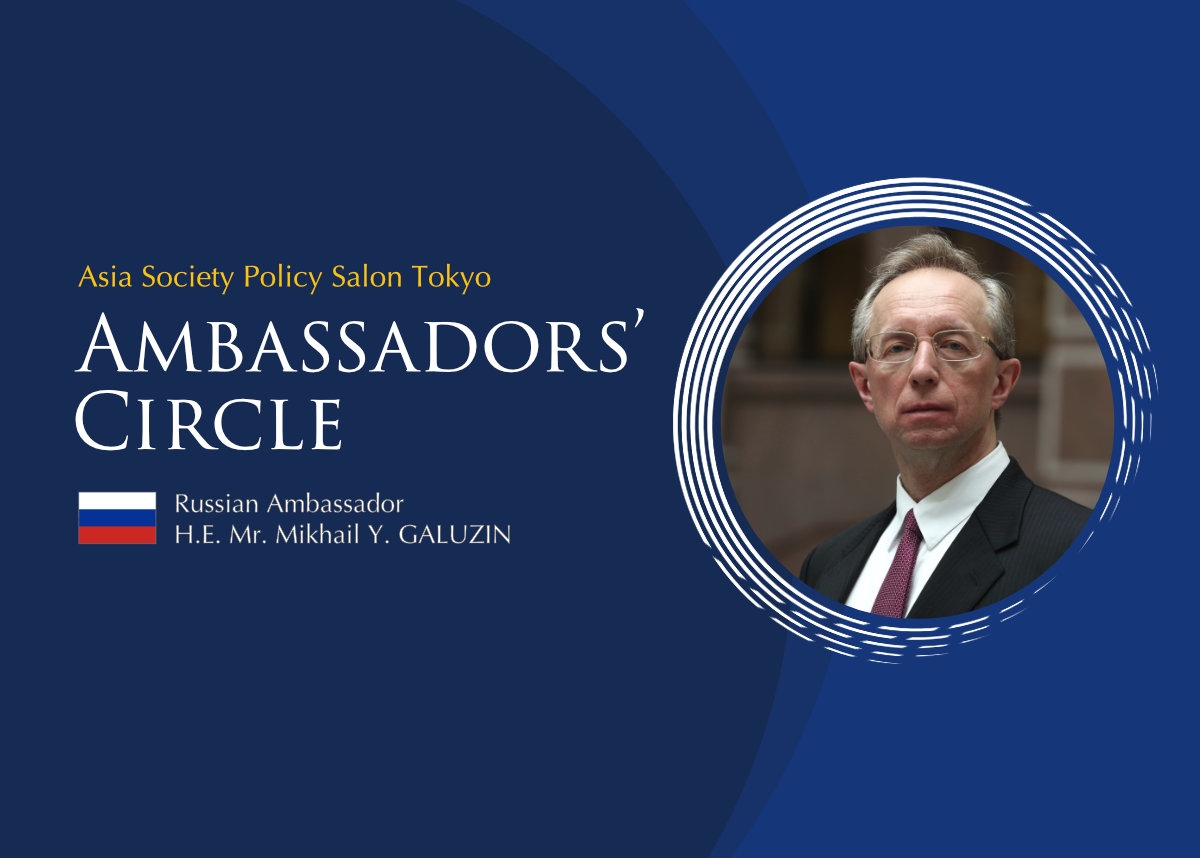 Asia Society Japan Center is honored to welcome His Excellency Mr. Mikhail Y. GALUZIN, Ambassador Extraordinary and Plenipotentiary of the Russian Federation to the Ambassadors’ Circle this August. You may have seen Ambassador Galuzin in official photographs as the official translator for President Mikhail S. Gorbachev and Prime Minister Toshiki Kaifu’s marathon negotiations or President Boris Yeltsin and Prime Minister Morihiro Hosokawa’s negotiations for the Tokyo Declaration. He is part of history when it comes to contemporary Russian-Japanese relations.

This is His Excellency’s fourth tour to Japan since taking his current post in 2018. Previously he was the Ambassador of Russia to Indonesia. Russia is one of the oldest countries for Japan to have formal diplomatic ties when they opened their consulate in Hakodate in 1858. In this program, he will share with us, points on Russian foreign policies in the Asia-Pacific region and in particular the Russian-Japanese relations with the recent dynamic developments we have seen as well as the partnerships between Russia and Japan develop further.

Asia Society Japan Center’s “Ambassadors’ Circle”, is an initiative launched in 2020 to forge deeper links and stimulate exchange between the Founding Members and Tokyo-based Ambassadors. In these turbulent times, a first-hand understanding of how different countries and their leaders interpret the evolving challenges in Asia in general is more important than ever. The “Ambassadors’ Circle” aims to involve you in this mission.

This event will be conducted on-site and online.
Participation is for members and guests only. Registration is required.

Ambassador Extraordinary and Plenipotentiary of the Russian Federation. He joined the Russian Foreign Ministry in 1983 and served at the Embassy of USSR in Tokyo from 1983-1986, Embassy of Russia in Tokyo from 1992-1997, and as Minister-Counsellor of the Embassy of Russia to Japan from 2001-2008. During his time back at the Ministry of Foreign Affairs, His Excellency served as Director to of the Third Asia Department from 2008 to 2012. Previous to his assignment back to Japan in 2018, he was the Ambassador of Russia to Indonesia.