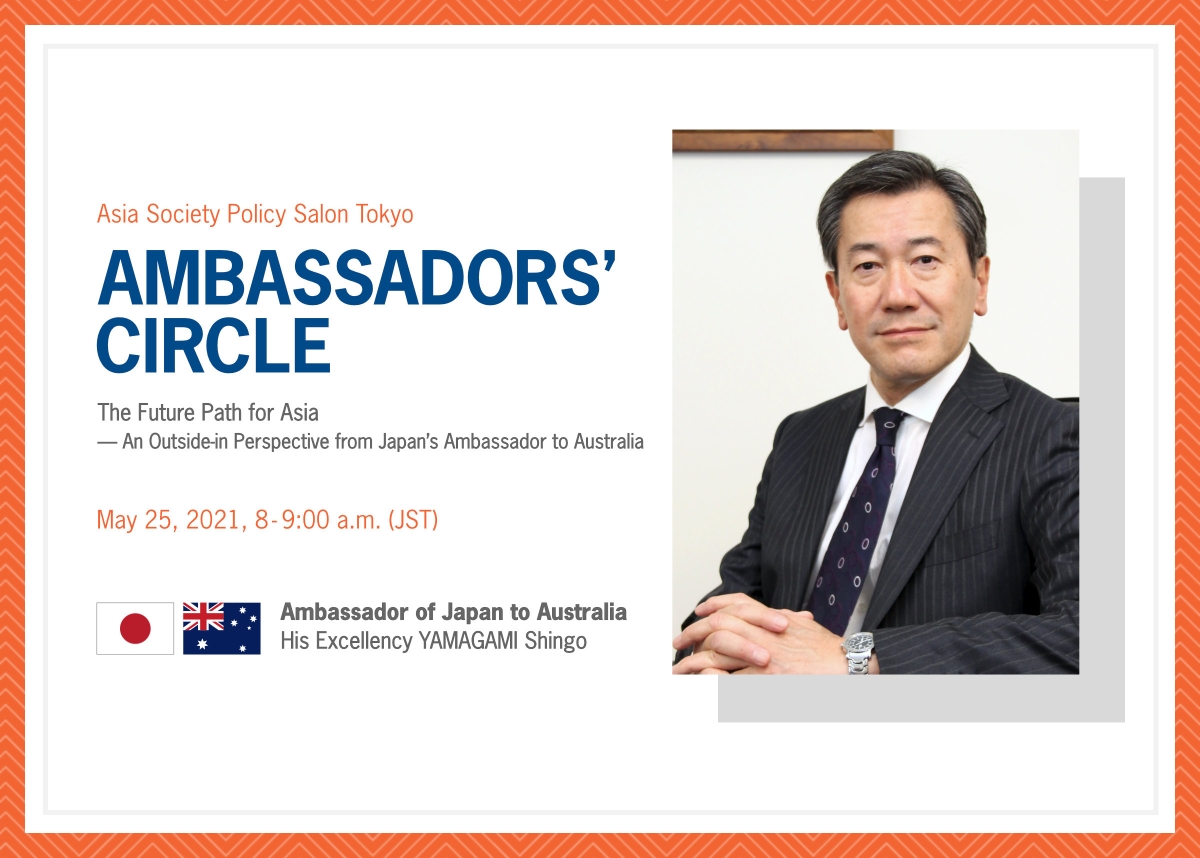 Asia Society Japan Center is honored to invite Japanese Ambassador to Australia, H.E. YAMAGAMI Shingo for May’s “Ambassadors’ Circle”.  Since launching the initiative last year to forge deeper links and exchanges between our Founding Members and Tokyo-based Ambassadors, we’ve gained insights locally.  This time, we have the opportunity to see Japan and the Indo-Pacific from outside-in through the eyes of a veteran Japanese diplomat.

In these turbulent times, a first-hand understanding of how different countries and their leaders interpret the evolving challenges in Asia in general, the US-China dynamics, is more important than ever. The “Ambassadors’ Circle” aims to involve you in this mission.

His Excellency YAMAGAMI Shingo is the Ambassador of Japan to Australia following his appointment in December 2020. Prior his post to Australia, he served as Director-General of Economic Affairs Bureau at the Ministry of Foreign Affairs (2018-2020). Other overseas postings include diplomatic postings to the United Kingdom as Political Minister (2009– 2012), Economic Counsellor for the Permanent Mission to the United Nations and International Organizations (2000–2003) in Geneva, to Hong Kong as Consul (1998–2000), and to the United States as Second Secretary (1987–1990). Within the Ministry of Foreign Affairs, Ambassador Yamagami have previously served as Director-General, Intelligence and Analysis Service (2017 – 2018), and Ambassador for Policy Planning and International Security Policy (Deputy Director-General, Foreign Policy Bureau) (2014 – 2015).

Outside the Ministry of Foreign Affairs, Ambassador Yamagami served as the Director-General (Acting) at the Japan Institute of International Affairs (2015 – 2017). He was also seconded to the National Police Agency as Director of the Police Administration, Ibaraki Prefectural Police (2007-2009).

Ambassador Yamagami has a Bachelor of Arts from the University of Tokyo and studied at the Graduate School of International and Public Affairs, Columbia University.