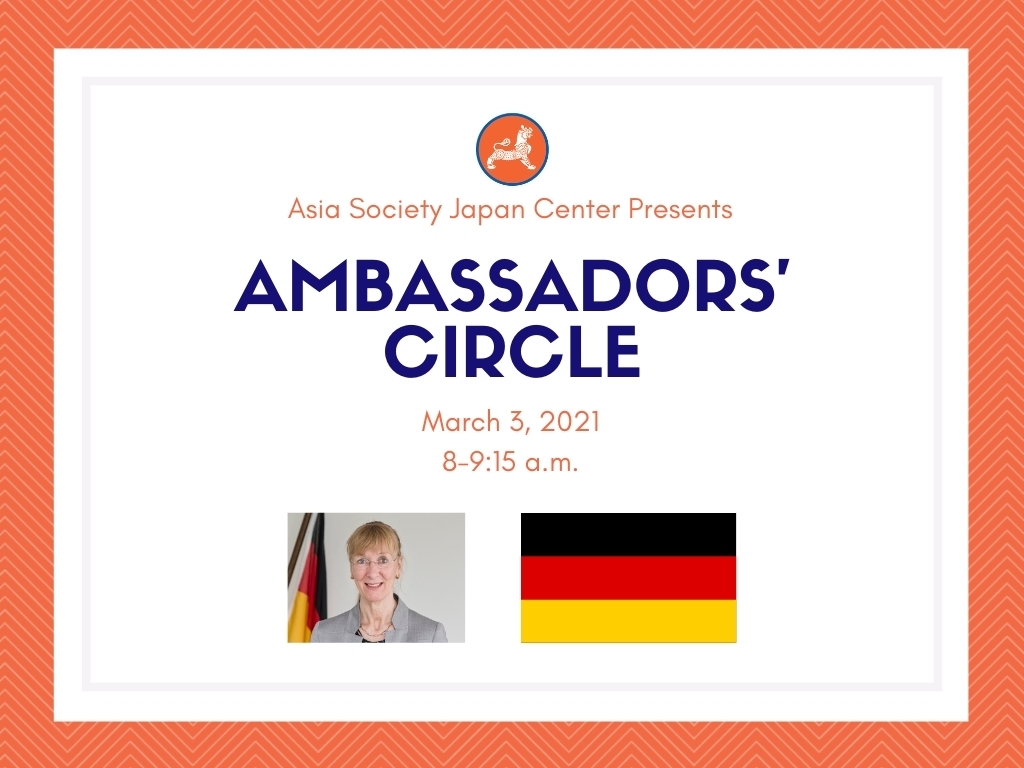 Asia Society Japan Center is delighted to welcome Her Excellency Ms. Ina Lepel, Ambassador of Germany to Japan to the March Ambassadors’ Circle.  Ambassador Lepel’s presentation is titled, “Germany’s New Policy Priorities and Goals for the Indo Pacific – New Impulses for German-Japanese Partnerships”. Ms. Susanne Welter who is the Minister Economics and Scientific Affairs at the German Embassy in Tokyo will also join this program.

Ambassador Lepel assumed her post in Japan in September 2019.  No stranger to breaking new ground, she has served as Germany’s first female ambassador to Pakistan, the first director-general for Asia and the Pacific in Germany’s Federal Foreign Office, and now as Germany’s first female ambassador to Japan. We look forward to hearing how she has had to adapt to Covid-19 but how she sees the partnerships between German and Japanese develop further.

Asia Society Japan Center’s “Ambassadors’ Circle”, is an initiative launched last year to forge deeper links and stimulate exchange between our Founding Members and Tokyo-based Ambassadors.  In these turbulent times, a first-hand understanding of how different countries and their leaders interpret the evolving challenges in Asia in general, the US-China dynamics in particular, is more important than ever. The “Ambassadors’ Circle” aims to involve you in this mission.

Ambassador of the Federal Republic of Germany to Japan

H.E. Ina Lepel launched her diplomatic career when she joined the German Foreign Service in 1988. She has since assumed posts in countries around the world, including Thailand, Georgia, the U.S. and Pakistan. Her current assignment as ambassador to Japan comes off the heels of her post as Germany’s first director-general for Asia and the Pacific.

With more than 30 years at Germany’s Federal Foreign Office, Susanne Welter has had a number of diverse postings, including to countries in Africa, Europe and Central Asia.  She arrived in Japan in August 2019 to take up her post as head of economic and science affairs at the German Embassy in Japan.