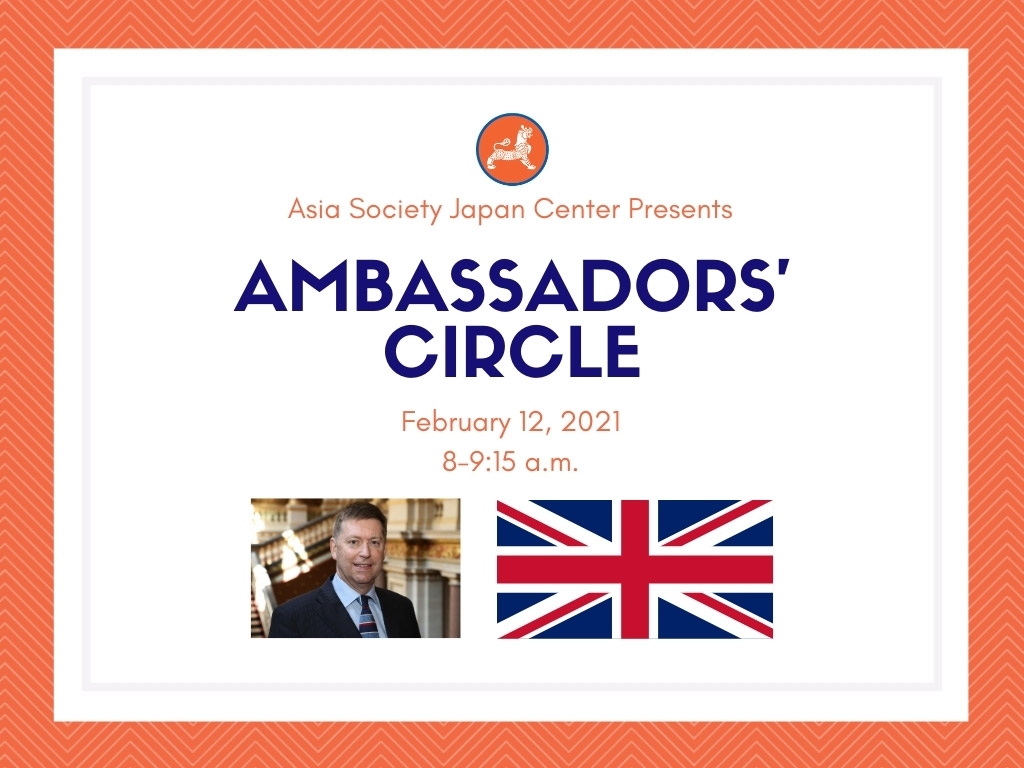 The Asia Society Japan Center invites you to 2021’s first “Ambassadors’ Circle”, an initiative launched last year to forge deeper links and stimulate exchange between our Founding Members and Tokyo-based Ambassadors.  In these turbulent times, a first-hand understanding of how different countries and their leaders interpret the evolving challenges in Asia in general, the US-China dynamics in particular, is more important than ever. The “Ambassadors’ Circle” aims to involve you in this mission.

For our first session in 2021, we are honored to invite the British Ambassador to Japan, His Excellency Paul Madden CMG. No stranger to the Asia Pacific region, Ambassador Madden will address UK-Japan relations, based on his most recent four years posting to Tokyo. Jesper Koll will moderate a “fireside chat” followed by audience participation in the discussion. Don’t miss this exclusive opportunity to learn as Ambassador Madden departs Japan at the end of February.

A career diplomat, he was Managing Director at UK Trade and Investment (2004-2006), responsible for coordinating and implementing international trade development strategies to support companies across a wide range of business sectors.

As Assistant Director of Information at the Foreign and Commonwealth Office (2003-2004) he was responsible for public diplomacy policy, including managing the FCO funding of the BBC World Service, the British Council and the Chevening Scholarships programme. He led the team responsible for the award-winning UK pavilion at the Aichi Expo in Japan 2005.

He was Deputy High Commissioner in Singapore from 2000-2003 and has also served in Washington (1996-2000). Between 1992-96 he worked on EU enlargement and Environmental issues at the FCO in London. His first posting in Tokyo was as First Secretary Economic (1988-92).

Before joining FCO he worked at the Department of Trade and Industry (1980-87) on a range of industrial sectors and trade policy, and was head of the Japan team. He spent two years as a minister’s Private Secretary.

He has an MA in Economic Geography from Cambridge University, an MBA from Durham University, studied Japanese at London University’s School of Oriental and African Studies, and is a Fellow of the Royal Geographical Society. His book, Raffles: Lessons in Business Leadership, was published in 2003, and his first play was performed in Sydney in 2015. He first visited Japan on a study tour in 1982, after winning an essay contest organized by the Japanese Ministry of Foreign Affairs.

Married to Sarah, with three adult children, he was born in Devon.