Ambassadors’ Circle with the Singapore Ambassador 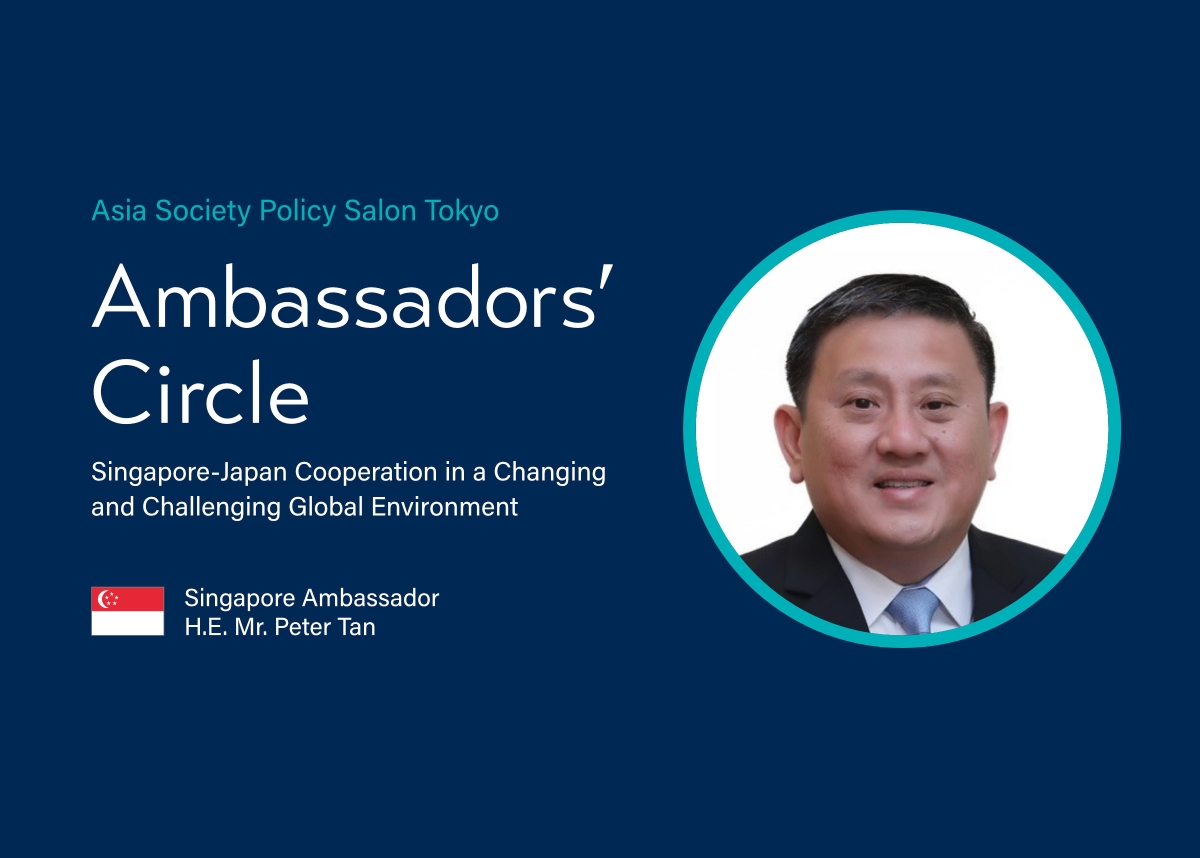 Asia Society Japan is honored to welcome His Excellency Mr. Peter Tan, Ambassador Extraordinary and Plenipotentiary of Singapore to the Ambassadors’ Circle. He will give a talk titled "Singapore-Japan Cooperation in a Changing and Challenging Global Environment".

Ambassador Tan is a longtime friend of Japan. He was an exchange student to Japan at a young age and served multiple times in Japan since joining the Ministry of Foreign Affairs in 1992. Given his background, he is passionate about international student exchange, and furthering collaboration between Singapore and Japan for the future generation, including initiatives to cooperate in areas of digital green, and sustainable economy. He is also an accomplished chef, having produced Singapore-themed bentos for Seijo Ishii supermarket.

Mr Tan was Deputy Secretary/Southeast Asia & ASEAN in the Ministry of Foreign Affairs from January 2015 to September 2019. Mr Tan was the Singapore Ambassador to the Republic of Korea (concurrently accredited to Mongolia) from February 2011 to January 2015.

Since joining the Ministry of Foreign Affairs in 1992, Mr Tan has served in various capacities on issues related to Southeast Asia, Northeast Asia, Europe, Australia, New Zealand and the Pacific, United Nations and Technical Cooperation. Mr Tan served in the Singapore Embassy in Tokyo as First Secretary from 1995 to 1998 and in the Singapore High Commission in Kuala Lumpur as Counsellor from 2001 to 2002.  He also served in the Singapore Embassy in Tokyo from 2002 to 2005 as Counsellor, and subsequently as Acting Minister-Counsellor and Deputy Chief of Mission.  Mr Tan was appointed as Second Director of the Southeast Asia Directorate on 27 December 2005, and served as Director from October 2006 to August 2010.

Mr Tan graduated with a Bachelor of Arts, Hons II Upper from the National University of Singapore in 1992.  He was awarded the Fulbright Scholarship and obtained his Master of Arts (East Asian Studies) from Columbia University, USA, in 2000.

Mr Tan presented the Letter of Credence to His Majesty the Emperor Naruhito on 12 February 2020.

Mr Tan was awarded the Public Administration Medal (Silver) in 2008. He is married to Madam Sim Siew Eng.