Ambassadors’ Circle With the Indian Ambassador 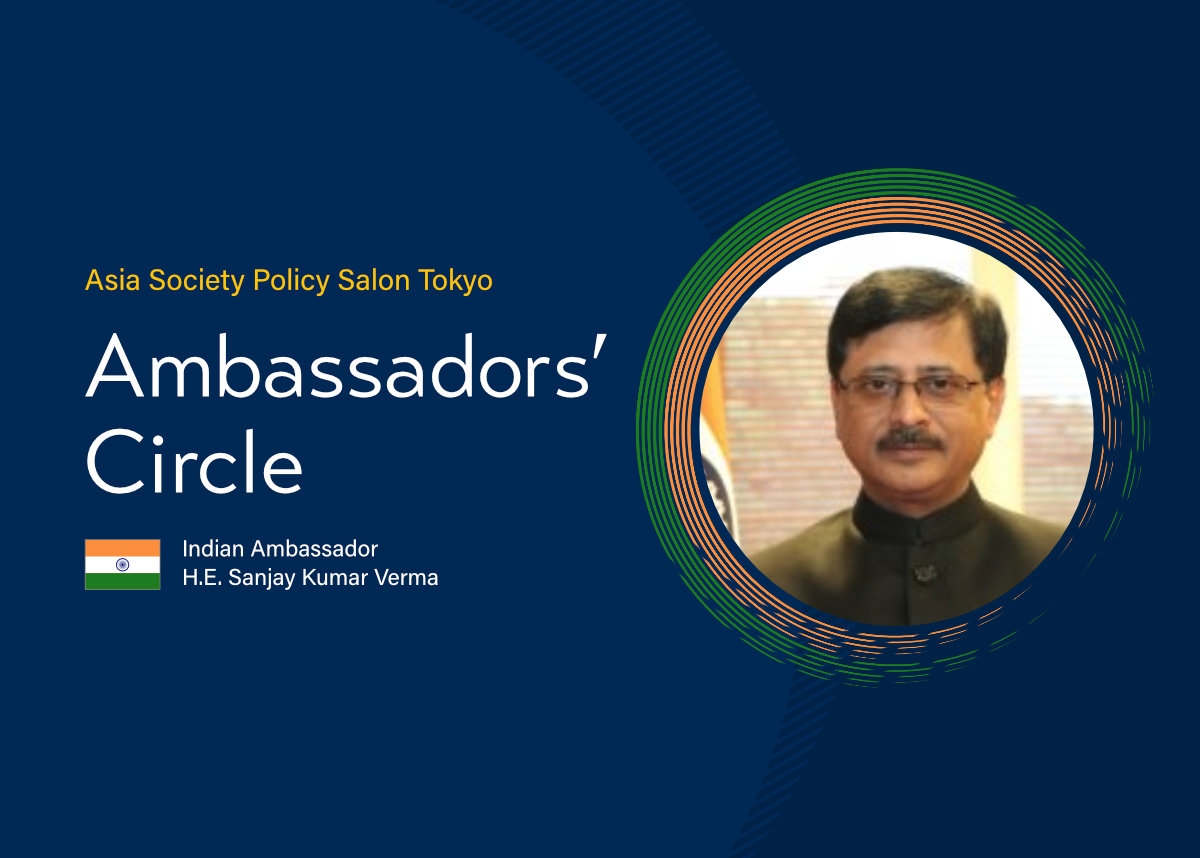 Asia Society Japan is honored to welcome His Excellency Mr. Sanjay Kumar Verma to the Ambassadors’ Circle on January 11. The presentation is titled, "Future of India Japan Partnership".

Upon Prime Minister Kishida taking office in October, Prime Minister Modi was one of the first global leaders he called. They affirmed to further develop Japan-India relations and the realization for the “Free and Open Indo-Pacific”. Now with a trip to India being planned for early 2022, Kishida is keen to strengthen the ties that was elevated by former Prime Minister Abe. Ambassador Verma will shed light on how India sees its relationship with Japan and the Indo-Pacific on its policies, security issues, economic cooperation as well as people-to-people exchanges. Looking post COVID-19, there are agendas for both countries to focus bilaterally and regionally. Don’t miss this exclusive opportunity to learn how major powers are adapting national strategies to shape Asia’s future.

Asia Society Japan’s “Ambassadors’ Circle”, is an initiative launched in 2020 to forge deeper links and stimulate exchange between the Founding Members and Tokyo-based Ambassadors. In these turbulent times, a first-hand understanding of how different countries and their leaders interpret the evolving challenges in Asia in general is more important than ever. The “Ambassadors’ Circle” aims to involve you in this mission.

This event will be conducted in-person and online.
Participation is for members and guests only. Registration is required.

H.E. Mr. Sanjay Kumar Verma is an officer of the 1988 batch of Indian Foreign Service (IFS). He was stationed at the Consulate General of India, Hong Kong and at the Embassy of India in China, Vietnam and Turkey, before serving as the Consul General of India in Milan, Italy. Amb. Verma was also the Indian Ambassador to the Republic of Sudan. Following his tenure in Sudan, Amb. Verma served as Joint Secretary (Global Estate Management) in MEA, New Delhi. Prior to his arrival in Japan as the Ambassador of India, Amb. Verma was posted in MEA, New Delhi as Additional Secretary (Administration) and was also in charge of the Cyber Diplomacy Division.