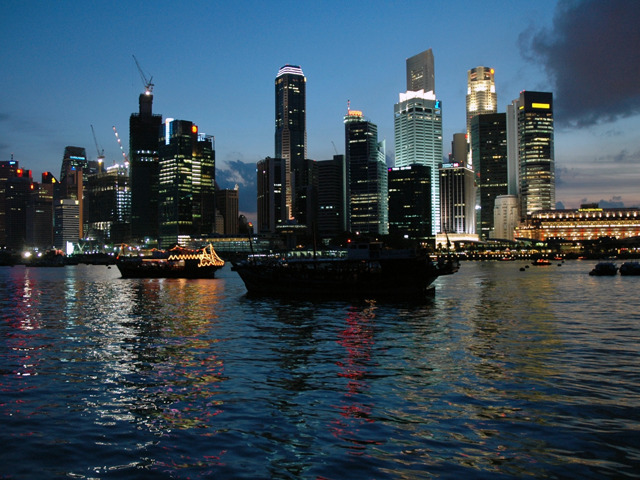 Don’t chew on this— Singapore doesn’t allow gum in public. But don’t spit it out, either. Spitting in public carries a $1,000 fine. And by all means, flush the toilet! If convicted, neglecting to twist the swill will cost $150 the first time, while serial offenders are fined $1,000 per failure-to-flush. Some may bristle under the rules of the “nanny state,” but many Singaporeans enjoy the comforts and protections of life under their government. With almost no unemployment or poverty, Singapore is in many ways a model nation. Its standard of living is even higher than the top-ranked European countries.

Neighborhoods gleam, and elementary school campuses rival those of universities abroad. Ethnic tensions and crime are minimal. Some say that the government is too strict, but others argue that a firm government has reared tiny Singapore into the “Lion of Asia.”

Singapore dangles off the southern tip of the hot and humid Malay Peninsula. Less than 700 square miles, it is only twice the size of New York City. Many Singaporeans credit this city-state’s success to the forceful hand of Lee Kwan Yu, who served as prime minister from 1959-1990. Lee directed the economy, making Singapore a center for electronics, manufacturing, and finance.

Lee also nurtured its citizens, providing public housing not only for low-income residents, but also middle-class families, singles, and the elderly. In fact, more than 90% of Singaporeans today live in homes built by the government’s Housing Development Board. Singaporeans also have a first-class public education system that has resulted in a stunning 92% literacy rate.

Singapore’s population is diverse: over 76% of the country’s 4.5 million people are Chinese, while the rest are mostly Malay or Indian. Singapore has three official languages: Chinese, Malay, and English. Buddhism is the strongest religion in Singapore, but there are also many Muslims, Daoists, Hindus, Christians, atheists, and agnostics.

The government insists that all these groups play nicely together. State policies actively promote cooperation and “ethnic harmony,” but some say that the government’s methods go too far. Racist rhetoric is forbidden, but laws are often used to crack down on people who criticize government authority. For this reason, Reporters Without Borders ranked Singapore a dismal 140 out of 167 in their 2006 Annual Worldwide Press Freedom Index.

While Singapore has an open market economy and is relatively free from corruption, international critics say its democracy is a sham and that it is in fact a one-party authoritarian state. Singapore has a low crime rate and few illegal drugs, but many condemn the judicial system, which certainly does not spare the rod. Caning is a common punishment for non-violent crimes. Suspects are often imprisoned without trial, and, according to Amnesty International, Singapore executes more people per capita than any other country in the world.

Singapore today is led by Lee Kwan Yu’s eldest son, Prime Minister Lee Hsien Loong. Under his direction, Singapore is striving to become a biotechnology hub. And, like his father before him, Lee Hsien Loong does not shy from micromanaging the daily choices of individuals in order to improve the state’s quality of life.

For instance, in order to buy a car, drivers must first purchase a permit. But only a few are auctioned each year and the price can equal the cost of an actual car, making it impossible for many to afford a private vehicle. However, the profits from the permits fund Singapore’s Mass Rapid Transit system, which is used by over half of Singaporeans.

So residents might not have the choice to drive a car, but the roads flow smoothly without traffic jams, the public transport runs efficiently, and Singapore’s air is among the cleanest in Asia. Singaporeans can indeed go ahead and breathe deeply… but they may have to watch their manners, and their mouths.