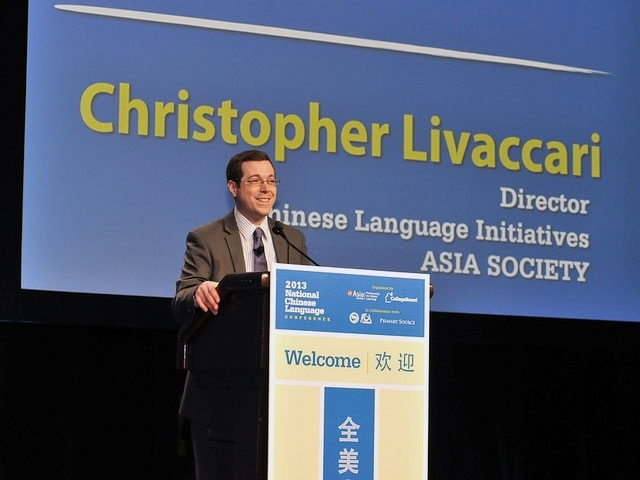 I began teaching Chinese and Japanese almost a decade ago, after a five-year tenure in the U.S. Foreign Service. Since that time, I have seen the field of Chinese language teaching and learning not only expand, but also mature and develop, and I am hopeful about its future. So hopeful, in fact, that I have decided to return to a school environment. Starting in August 2013, I will begin a new role as upper elementary principal and director of the K–8 Chinese language immersion program at the International School of the Peninsula (ISTP) in Palo Alto, CA. ISTP has offered Chinese immersion for more than fifteen years (one of the first handful of Mandarin immersion programs in the United States) and French immersion for well over thirty, so I am looking forward to learning a lot from our teachers and watching our students enjoy the kind of linguistic opportunity that I scarcely could have dreamed of as a child.

I grew up in the New York suburbs, in a place that was not particularly diverse (our neighborhood was about equal parts Irish, Jewish, and Italian, with some English, German, and Scandinavian but not much else). When I told my mother that I wanted to become a high school exchange student in Japan, she cried. When I later found out that my father had passed up a job opportunity in Germany, I nearly cried, thinking what a shame it was that I had missed the opportunity to become a fluent German speaker. Our neighborhood was not exactly ground zero for global competence. So it is with great sense of enthusiasm—if a certain feeling of awe—that I embark on this new adventure to give young people the great gift of multilingualism.

Although I will be moving on physically from Asia Society, I look forward to staying connected and involved in an advisory capacity. Asia Society has been part of my professional life since the very beginning. Indeed, my first encounter with Asia Society was almost twenty years ago. As a student of Chinese and Japanese literature at Columbia University, the Asia Society store was one of the only places in New York that I could find books about Asia (this was pre-Internet, of course). Later on, while working at the U.S. Embassy in Tokyo, I had the privilege of accompanying our deputy chief of mission to the Williamsburg Conference, a high-level gathering of movers and shakers from across the Pacific Rim. My first long-term teaching job was at an Asia Society school that was founded in 2005, and I have been actively engaged with Asia Society’s Education Department since that time.

Asia Society has long taken a leading role in world languages education, especially Chinese, through the pioneering leadership of Vivien Stewart, the establishment of the Chinese Language Initiatives under Shuhan Wang, and the continuing support of Vice President for Education Tony Jackson. Jeff Wang, Yun Qin, Eleise Jones, and Yi Zheng are the most incredible colleagues anyone could ask for and I’m looking forward to watching them shape the work in new and exciting ways, and continue to blaze the trail for Chinese language education and U.S.-China educational exchange. The work that continues at Asia Society is among the most important for creating bridges between U.S. and Chinese youth and ensuring models for a cooperative and constructive U.S.-China relationship for the future. I am truly grateful to all the friends and colleagues who have inspired and supported me across Asia Society, within our Education Department, among our Confucius Classrooms Network, and beyond.