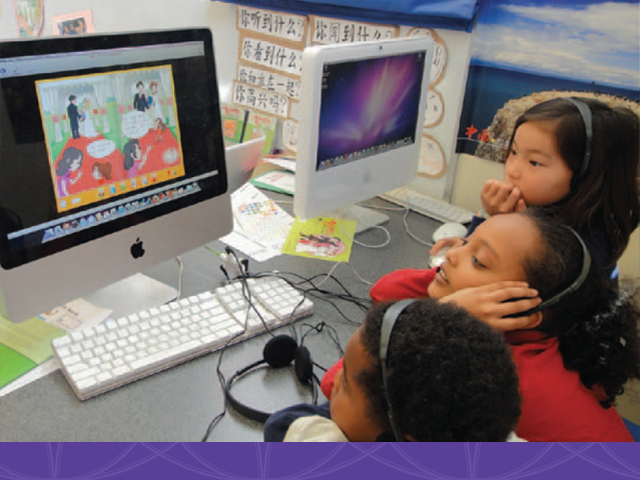 Chinese immersion programs are among the fastest-growing areas of language education in American schools. Research shows that immersion is an especially effective method for language acquisition: they result in high levels of proficiency at relatively low cost. Immersion students gain proficiency in a new language without any detriment to progress in their native language or to subject matter achievement.

Since immersion programs usually start in kindergarten or first grade, they provide ample time within a student’s academic career for the development of oral and written proficiency in Chinese.

Over the last four decades, immersion programs in many languages have seen slow but steady growth in U.S. schools. Most immersion programs offered European languages, with a small number in other languages. Much of what is known about immersion’s effectiveness has been gleaned from these programs. Their experiences provide useful guidance about options for program models, teaching strategies, literacy development, and time allocation for both the immersion language and English. While we know a great deal about what works in immersion and why, we are still discovering the aspects of this kind of education that can be appropriately applied to Chinese instruction.

Prior to 2000, in the U.S. there were fewer than ten public or private elementary school immersion programs in either Standard Chinese or Cantonese. They led the way for the approximately seventy new programs now operating, most of which are still in their infancy. The pioneer programs have addressed the same issues that now face their newer counterparts, exploring solutions to common questions such as the following:

The teachers and administrators from the long-standing Chinese immersion programs generously shared their expertise and resources with one another as well as with the newly emerging programs around the country. They answer numerous inquiries made by email or phone, they cheerfully host visitors, and they network with one another and collaborate on important projects.

One of those projects is the Chinese Language Learning in the Early Years handbook.

Over time, our understanding of what makes Chinese immersion programs successful will continue to change, just as our thinking about education in general continuously evolves. Thus, while this handbook represents the best of what we currently know about Chinese immersion, it is one step in a longer journey.