Asia in the Schools | Asia Society Skip to main content

Asia in the Schools 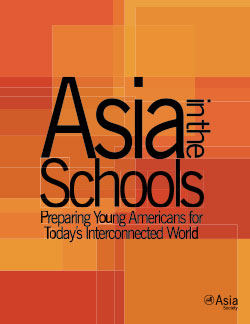 Now, more than ever, Americans face both opportunities and challenges that originate beyond our borders. In such a shrinking world, it is critical for all Americans—not just groups of experts—to be more educated about Asia. As the world’s largest, most populous, and fastest growing region, Asia plays a vital role in the continued prosperity of the United States.

Regrettably, in our schools, most young Americans learn very little about Asia. But, as the movement to raise standards for our students continues, we, as a nation, have an opportunity to enhance the education reform effort to embrace international understanding, and, from our perspective, Asia-related learning.

We must ensure that schools help students acquire the knowledge and skills they must have to succeed in our interconnected world. Learning about Asia and the mutual impact of our relationship with that region must become a new education basic. The report, Asia in the Schools: Preparing Young Americans for Today’s Interconnected World, presented by the National Commission on Asia in the Schools, calls upon the nation to make sure our young people are prepared for life and work in the twenty-first century.