Language Education for a New Generation 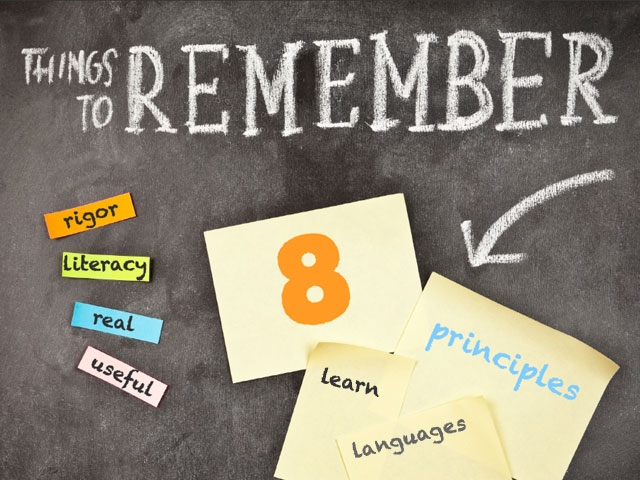 How many Americans have studied four or five years of French or Spanish in school and yet can barely manage a sentence of that language once we hit adulthood? Why do Americans continue to be ridiculed and sneered at by people around the world for our lack of linguistic prowess?

Many educators with a global outlook are wrestling daily with these legacies of American exceptionalism. The reality, of course, is that many Americans are multilingual. Indeed, many of the best foreign speakers of Chinese and Japanese I have ever met are Americans. I think the problem is one of being a nation of extremes—a country in which you’d expect to find the very best language learners and the very worst, just as you’ll find, for example, the most obese people and the most health-obsessed.

The major challenge is lack of incentives. Why do people in Iceland speak such beautiful English? The answer is simple: you wouldn’t get very far in life speaking only a language understood by less than half a million people on a single island north of Europe. While there is currently an explosion of interest in Chinese language learning among Americans, the fact is that the vast majority of international business conducted in China—and globally—is conducted in English. So what’s the incentive for any American kid to learn another language?

Therein lies the challenge—and the art—of language teaching in the United States, and the problem with the kinds of economic and political arguments that are most often used to marshal support for teaching one language over another. If you’re in a non-English speaking country, the language of choice is obvious. But if you already speak English, it may not be so clear: Spanish, French, Arabic, or Chinese? These are all good choices, I would argue, and the reality is that most previous predictions about “the language of the future” have been wrong. The Chinese boom we are currently experiencing is not so different from the Japanese language boom of the 1980s and 1990s. I rode the Japanese wave of the 1990s and washed back with the tide to pick up the Chinese tsunami of the new century.

In 2005, I began teaching Chinese and Japanese in one of the first schools in what was to become the Asia Society International Studies Schools Network. My Japanese classes usually began with students telling me that they needed to learn Japanese as quickly as possible so that they could watch anime, read manga, or decipher the instructions for their video games. In a way, they had a utilitarian or instrumental reason for wanting to learn the language, and what this meant was that after a month of learning a language with an extremely challenging writing system and grammar, many of them became frustrated that they could still not achieve the goal they had in mind. It turned out that a lot of these students couldn’t go the distance, so to speak, but on the other hand I found that those who stuck with it went further than many of their peers learning Chinese or Spanish—for them, their original utilitarian goal merged with the intrinsic joy of learning and appreciating the Japanese language.

My Chinese language students were of a different sort entirely. The vast majority of them had been assigned to take Chinese by the school or pushed to do so by their parents, and what could be less appealing to a teenager than some old person in authority (parents or principals) telling them what to do? While I’ve heard many Chinese language teachers complain that this means that their students aren’t fully motivated to learn Chinese, I decided to take this as a challenge and a motivation for myself. Since there was no external motivation for these students, I’d have to make the class so exciting and fun that they’d be compelled to plug in. And that’s just what happened. I can tell you that there’s nothing more rewarding than seeing a kid walk in with a completely blank expression, wondering why they’ve been put in a Chinese class, and walking out with a big smile and engaging in what some of my colleagues began to describe as the “ni-howling” (“ni hao” is the Chinese phrase for hello).

It turned out to be a great thing that students had no expectations about China or Chinese. In the beginning, many of them still cited their most prominent image of China as “chicken and broccoli take-out” and asked my teaching assistant from Taiwan whether Taipei had paved roads! What a wonderful adventure to open for them an exciting path of discovery and engagement with a language and culture about which they knew so little, or thought was encapsulated in fortune cookies and pan-fried dumplings.

The premise I start from with students is that titles matter. After a number of years in the U.S. Foreign Service, I became quite used to addressing people as Madame or Mr. Ambassador, so when I began a Model United Nations program at my school, I started doing the very same thing with my students. How differently they behaved when they were “Madame Ambassador” instead of Sara or Joy, “Mr. Ambassador” instead of Bobby or Mike. Of course, I still had a few kids who never quite mastered the art of diplo-speak: “France, you guys just need to, like, chill out . . .”

The other premise I invoke is that students who are given the proper degree of trust and respect will rise to the occasion. That’s why I chose to respect my students by using titles like “linguist” or “diplomat.” Or, if we were dealing with economic or trade issues, I’d use “CEO” or “consultant.” Although they may never have met these kinds of people, they’ve undoubtedly seen some on TV, and they’ll take on these roles with relish. It’s a way of letting them know that their day at school is just as important to the world as Mom or Dad’s day at work—not something most kids hear in school, but a simple idea with a powerful impact and resonance.

With these two premises in mind, I take as my core guiding principle that learning about language and culture—like just all learning—is primarily an exercise of pattern recognition, interpretation, and application, and that language teachers should be actively engaged in the education of children beyond just the acquisition of vocabulary and grammar. That is, it’s more about the education than just the language.

In the forthcoming series of articles, I'd like to suggest “Eight Sparks” which I hope will help ignite a revolution in the way we think about the teaching and learning of world languages and cultures:

Sparks to Ignite a Revolution in Language Education