In my six years of studying Chinese, rarely has there been an opportunity in the classroom to learn anything but rote phrases and vocabulary that was often too formal or even outdated. It is worth keeping in mind that Chinese, like any other language, is evolving quickly and constantly—and even more quickly now with the influence of the Internet. Furthermore, consider the drastic differences in language between the American South and New England: certain turns of phrase and colloquialisms, or “slang”, are very prominent in one area and unheard of in another, though there is of course some overlap. It is exactly the same in China; slang in Beijing is different from slang on the southern shores is different from slang in the west of the country, especially if you take into account the drastic differences between dialects around the country that are often mutually unintelligible.

I was curious to know more about Chinese slang, so I asked my schoolmates at New York University Shanghai to suggest some for my edification and for the purpose of this article. In this, part one of two, I have included some of the (non-profane) ones that have to do with dating and romance, and also tried to give a sense of some stereotypes of modern Chinese youth. There are two parts to this blog post; the following is part one. For part two, click here.

“The thing is, every time you translate slang, you wind up with two translations: one is the slang translation, the other is what the words in the original phrase actually meant.”

Each term below is accompanied by literal and more accurate translations.

Below is a visual depiction that should give you a sense of where the 4 different groups of people (高富帅, 土豪,  文艺青年, 屌丝) mentioned above fall in society as determined by two simple factors: wealth and education. 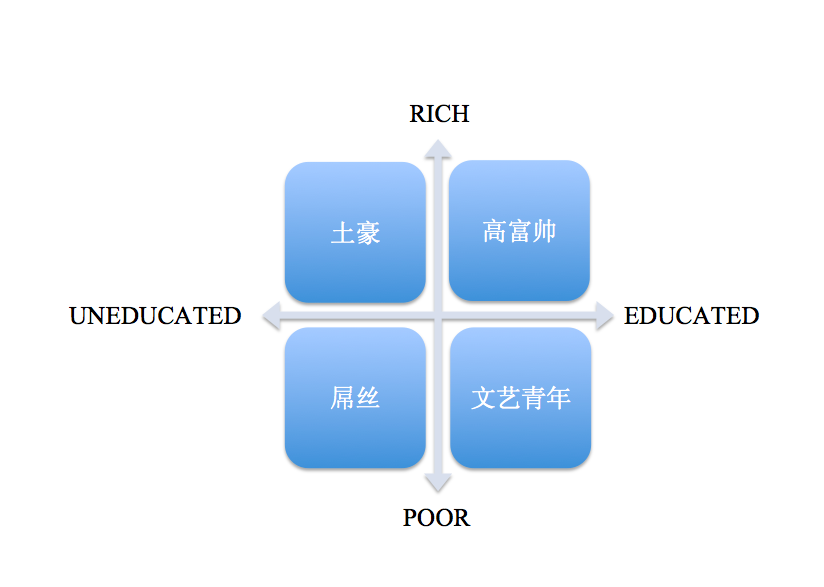 I hope that you found this post valuable and informative, and that you now have a deeper understanding of Chinese slang! Slang in any language is innumerable and endlessly various, and China has a fascinating mix of slang due to the convergent influences of the Internet, words from other languages, the use of homonyms, and much much more. The list above is by no means comprehensive, but I discovered a lot in my research and I hope it is interesting to you as well, whether you are here to spice up your vocabulary or simply try to understand something about Chinese colloquialisms. If you are interested in stocking up on your slang vocabulary, click here for Part Two of this blog post.

Please share this article with anyone who you think would find it interesting: friends, family, teachers, students! More posts are forthcoming as we dive deeper into the immensity and many complexities of China.