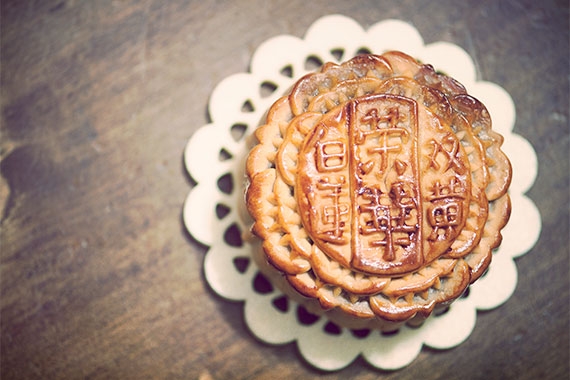 This year, Mid-Autumn Festival fell on September 27. To celebrate this holiday, we asked Kiril Bolotnikov, a junior at NYU Shanghai, to report on how international students celebrate this Chinese holiday. Here is his story.

As I bit through the mooncake’s flaky pastry into tender pork and sauce, still sore from the day’s biking, I reflected on my experiences with the Mid-Autumn Festival over the years as a student of the Chinese language, and later as an international student in China.

As an international student, I look at the Mid-Autumn Festival from four different angles: the mythical story behind this holiday, the actual celebration today, the travel, and the food.

The Myth Behind the Mid-Autumn Festival

The Mid-Autumn Festival rises out of an ancient myth of Houyi and his wife, Chang’e. There are many different versions of this story, but one of the more romantic ones goes like this: Houyi was a legendary archer—so when ten suns rose over the earth one day, bringing widespread disaster to the people, it was Houyi who shot down nine of them, leaving just one behind to light and warm the earth.

As an act of appreciation, an immortal gave Houyi an elixir of immortality. However, Houyi knew that if he drank it, he would have to leave his wife, Chang’e, so he hid the elixir and went on with his life. One day while Houyi was gone, his unfaithful apprentice forced Chang’e to show him where the elixir was hidden; however, rather than handing it over, Chang’e drank it herself. Houyi arrived home just in time to watch Chang’e float away into the heavens. Wanting to be close to her husband, Chang’e chose the moon as her residence, and became the moon goddess.

Houyi was devastated, and at the next full moon he put out all Chang’e’s favorite fruits and cakes as offerings to her. Others found out about this practice of Houyi’s and did likewise in sympathy, which turned into the Mid-Autumn Festival we practice today.

The Mid-Autumn Festival (中秋节, Zhōngqiū jié) is a harvest festival celebrated by people around the world in China, Singapore, Malaysia, Taiwan, and Vietnam, while Korea and Japan also have their own versions of it. The festival falls on the 15th of the eighth month on the Lunar calendar, on the night of the full moon, and between September and October on the Gregorian calendar. Some form of harvest festival has been celebrated during the autumn full moon from as long ago as the Shang Dynasty (16th to 10th c. BCE). As of 2008, the Mid-Autumn Festival is an official public holiday in China. It is also known as the Moon or Harvest Moon Festival—because it is held on the full moon between September and October—or as the Mooncake Festival, because of the popular tradition of eating mooncakes in celebration. It is a time of thanksgiving, of family reunion, and of prayer for an auspicious future. This year, 中秋节 fell on Sunday, September 27, 2015. This year, it was close enough to the National Day Holiday that we got the entire week off. More often, an extra one or two days adjacent to the Mid-Autumn Festival are made holidays to result in an extended, three- or four-day weekend.

The majority of my Chinese classmates go home for the Mid-Autumn Festival, to be with their families. The international students, on the other hand, not only do not have family commitments, but also have the experience of a whole part of the world opening up to them. The festival, therefore, is often spent in transit.

One amazing thing about living in China is the wealth of opportunities for travel. For many international students, this can mean Japan, South Korea, Thailand, Cambodia, Vietnam, Bali, and more international options. But just as many take the opportunity to search for fruitful experiences within China: this year I have classmates embarking on journeys to Beijing, Xi’an, Chengdu, Huangshan, and various cities in Yunnan Province. They will be crowded journeys; those who waited to buy their tickets until the last minute are finding out that there are sometimes no tickets left.

As for my own most recent Mid-Autumn Festival, last year I considered flying somewhere, or taking a train somewhere, but I was aware that transportation is packed around such festivals, so I chose something slightly different. The weekend of the festival, two friends and I hopped on our bikes and made the day-long ride out to Suzhou, which is about sixty-eight miles (110 km) from Shanghai.

We got lost a fair number of times, and we did not arrive at our hostel until well after dark, even though we left around 7:00 in the morning. My posterior was rubbed raw, and I had one of the worst sunburns of my life.

Despite all that, spending Mid-Autumn in Suzhou was one of my most entertaining trips; not just because it was a good story, not just because of how hard my roommate laughed when he saw my sunburn, not just because we stayed—for 15 to 18 RMB ($2.50 to $3.00)—in a shady back street hostel that didn’t care when two of us didn’t have any identification, but because the next day, when we had a few hours to wander around before taking our train back, we wandered through street after street that is bursting with people out to celebrate the holiday; sellers hawking their goods, and dozens of popup stands full of traditional liquors, snacks, and especially mooncakes.

I remember when I first ate mooncakes (月饼，Yuèbǐng) at the age of eleven. I was too young to really register what they were or their cultural significance. They looked neat and they tasted pretty decent, and that was all I really cared about. I did not have them again for a couple of years, but once I started taking Chinese in high school, it was, of course, an annual tradition for my Chinese teacher to bring in mooncakes to class and tell us stories. She would always bring in a mixture of sweet and “salty” ones—the sweet being red bean or lotus, sometimes with nuts, the salty being duck egg or meat. No one ever wanted to try the salty ones after the first year, but she kept bringing them just in case.

In Suzhou, I tried a meat mooncake for the first time since my freshman year of high school—the first time in five years—and realized it was one of the best things I had ever eaten. As I ate it, I gave thanks for the experiences the Mid-Autumn Festival had brought me—travel and food—and for the mythical or real history that had brought it about. I prayed for an auspicious future full of meat mooncakes.