Is Xi Jinping a Reformer? It's Much Too Early to Tell (A Response to Nicholas Kristof) | Asia Society Skip to main content

Is Xi Jinping a Reformer? It's Much Too Early to Tell (A Response to Nicholas Kristof) 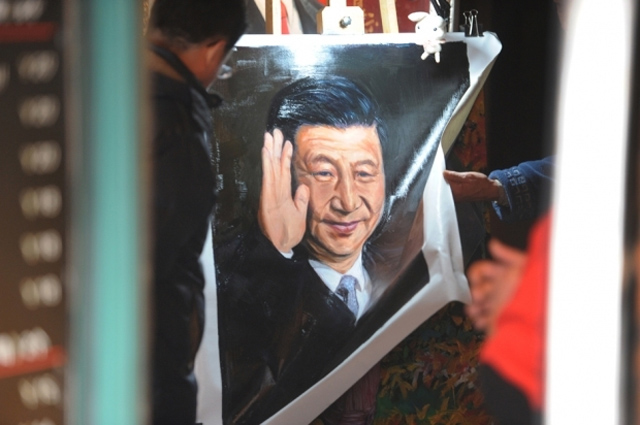 A painting of President Xi Jinping for sale in a Shanghai shop. (Peter Parks/AFP/Getty Images)

This article was co-authored by Rachel Beitarie, a Middle East-born and long-time Beijing-based freelance writer. She has published extensively in Israeli publications and has also contributed to venues such as Foreign Policy, Circle of Blue, and China Digital Times.

Last weekend, Nicholas Kristof wrote in the pages of The New York Times that he feels moderately confident China will experience resurgent economic reform and probably political reform as well under the leadership of recently installed Communist Party General Secretary Xi Jinping. Some forecasts about China’s future are easy to dismiss. But Kristof knows the country well and we take his predictions seriously. We don’t, however, find them persuasive. Here’s why:

Kristof’s key argument is that Xi Jinping will turn out to be more deeply committed to a reform agenda than his predecessor, Hu Jintao, and he and his colleagues will move China back onto a path of economic liberalization while also loosening up the political reins. We’d like to share this optimism, but we find it hard to do so. One reason is that, as Ian Johnson’s careful New York Times piece on Xi’s career to date shows, China’s newest top leader doesn’t have a track record of making bold moves. Admittedly, leaders on upward trajectories these days often play it safe, but even within what is a generally risk-averse context, Xi’s actions have been at the cautious end of the spectrum.

The search for clues that Xi is a secret proponent of reform gives us a strange sense of déjà vu. Much of what Kristof is saying now was said about Hu Jintao a decade ago, when he was the new leader about whom we knew very little. And just as Kristof now sees it as a hopeful sign that a progressive figure is likely to be elevated to a high post in Xi’s administration, China’s outgoing premier Wen Jiabao was seen then as someone likely to keep Hu moving in liberalizing directions.

Kristof notes that Xi is sending his daughter to Harvard. He suggests that this reflects the same special openness to Western ideas on Xi’s part as his encouragement of English-language learning at home. It’s hard to see why we should read much into this. Qaddafi sent his children to study in England, after all, and members of the Kim dynasty of North Korea have sent theirs to Switzerland.

Closer to home, the recently purged Bo Xilai, hardly a champion of political liberalization, has an English-speaking son who attended Oxford and did graduate work at Harvard. And as Slate’s William J. Dobson notes in “The East is Crimson,” the list of Chinese leaders whose grandchildren have attended elite U.S. schools includes former president Jiang Zemin (Harvard) and Jia Qinglin, a member of China’s ruling standing committee (Stanford).

Even if Xi himself had studied at a Western institution like Harvard, it wouldn’t be safe to assume he’d be a reformer. For a time, after all, some in the West seemed confident that Bashar Al-Assad would be just the person to reform Syria, since he had studied in London and is married to a UK-born investment banker.

The case of Eric Li is also worth keeping in mind. Before emerging as a key spokesman for the notion that the current Chinese political system is in great shape and doing better than many Western ones, he attended Berkeley and Stanford. In the case of Li, as with others, it seems to be precisely his knowledge of the West and of American history that has convinced him democracy is not the right path for China.

Unconvincing in other ways is Kristof’s idea that Xi is bound to be a reformer because it’s “in his genes” to be one. It’s never a safe bet to assume that children will follow in the ideological footsteps of their parents.

We also find Kristof unpersuasive when it comes to predicting concrete actions Xi might take.

He says that during the 10 years that Xi is due to stay in power, dissident and Nobel Peace Prize winner Liu Xiaobo will be released from prison. This is one prediction we do expect to come true, but we find it underwhelming in terms of significance. This is because the Nobel Laureate’s current sentence will be up before 2022.

The more significant question would be: Once released, will Liu end up back in prison or pushed into exile soon afterwards if he continues to speak out?

A more meaningful prediction would be that Xi will move to make China the kind of place where a document such as “Charter 08” — the call for greater civil liberties that led to Liu’s latest incarceration — can be freely circulated online without leading to anyone’s arrest. We would love to see that happen, but recent moves to tighten control of the web — something Kristof notes in his piece is a concern to him as well — do not suggest that things are moving in that direction. In addition, efforts by state media to brand the free press protests relating to the censorship of the liberal Southern Weekend newspaper as the work of “traitors” and outside forces are reminiscent of the efforts to denigrate Liu that came in the wake of his Nobel win.

Kristof’s other specific prediction is that the body of Mao Zedong will be moved out of Tiananmen Square during Xi’s decade in power. This counts as a real prediction rather than a simple statement of fact, but we don’t see any strong basis for Kristof’s making it. It is true that some Western journalists pointed out that relatively little attention to Mao was paid in some October and November rituals and speeches and wondered if that signaled a change in course, but recently Xi has been alluding to Mao in more traditional ways.

Even if Xi is indeed planning a reform push, it’s hard to see why he should choose Mao’s preserved body as one of his main targets, however pleasing that gesture may be to foreign commentators and TV networks. Mao is still revered by millions of Chinese, to the point that a decisive move to denounce him could have the opposite effect, of destabilizing the whole system and thus hindering more material — and much more urgently needed — reforms. The stock-trading, Hong Kong TV-watching farmer Kristof mentions seeing on visits to his wife’s ancestral village may nevertheless be a Mao fan. Even if he is not, he is still likely to prefer a reform in rural land ownership laws (a much-needed change that will affect millions but has been delayed for years by powerful vested interests) than in any landscape changes in Tiananmen Square in far-off Beijing.

A reassessment of the greatest horrors of the Mao years, such as the Great Leap Forward famine, could even come without his body being moved. In the United States, school textbooks refer to the inhumanity of slavery and the atrocities committed against Native Americans, but Andrew Jackson is still on $20 bills. As a nationalist and leader of the same organization that Mao led, Xi would seem an unlikely figure to claim that there was nothing good about the sole permanent occupant of Tiananmen Square, who is routinely credited for helping bring the Communist Party to power and setting China on the road toward the national “revival” that Xi is making one of his watchwords.

Kristof is encouraged by the political development of China’s neighbors. He writes: “Over the years, most of China’s neighbors — from Taiwan to Mongolia, South Korea to Thailand — have become more democratic, and now even Myanmar is joining the parade. How can mighty China be more backward than Myanmar?” We don’t think many in China now think of Mongolia, Thailand, and Myanmar as clearly more advanced than their own country, especially given the high growth rates and increased international influence that it experienced during Hu Jintao’s decade in power (Kristof’s dismissal of that era as a failure notwithstanding).

It is true that some reform-minded Chinese express admiration for the democratic moves that have been made in neighboring countries and suggest that their country would benefit from similar reforms. Not all Chinese — by any stretch — see states in the region that have elections but lack stable democratic systems, or that seem to suffer from the same corruption that they see at home, or that have lagged behind China in terms of growth rates as models worthy of emulation. And the official media continues to have a field day with every new problem — from scandals to acts of violence against women — that takes place in democratic but often chaotic India, emphasizing that corruption, poverty, and turmoil there show that the Western notion that it is superior to China due to its political system is misguided.

So, what do we think will happen in China in the coming years? We don’t know. We do expect it to change, or rather to keep changing — for even though the same organization has stayed in power for many decades now, it has proved a protean one in many regards, and below the level of formal governance and state power, cultural shifts of all kinds have been the order of the day for a long time now. We also expect to be surprised — as we have been continually in recent years.

A final thought is worth keeping in mind. Given the arguments Kristof makes, the very last sort of person you would think would prove pivotal in setting an authoritarian state on the road to liberalization would be the son of rigid dictator, who had been sent abroad to study in a Stalinist country, and then headed up the secret police. And yet, that’s what happened in Taiwan. Its moves away from authoritarianism owe much to the Moscow-trained Chiang Ching-kuo, the son and successor of Chiang Kai-shek.